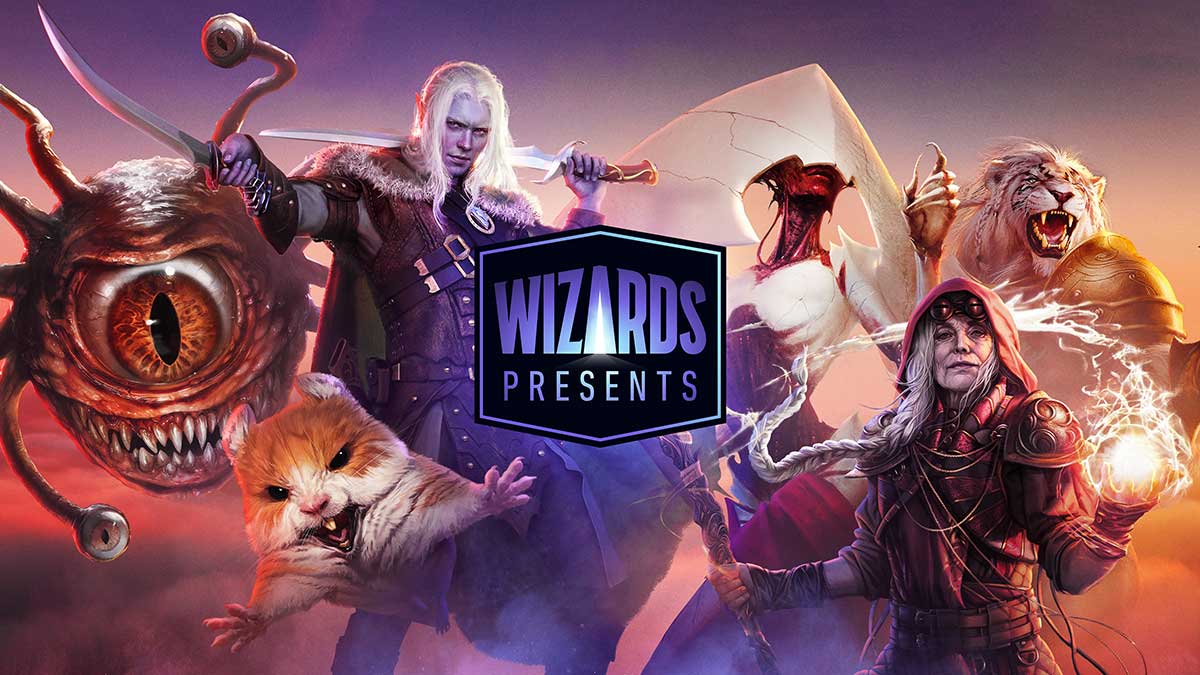 Wizards of the Coast announces One D&D and more

Wizards of the Coast, a gaming division of Hasbro (NASDAQ: HAS), today announced a lineup of innovative releases for later this year and beyond during their direct-to-fan virtual event, Wizards Presents. These initiatives enhance Hasbro’s $2.1 billion games portfolio for players of all ages, which include iconic fantasy brands Magic: The Gathering and Dungeons & Dragons.

Hosts Jimmy Wong, Ginny Di, and Sydnee Goodman showed off exciting fantasy storytelling products for use at the table, in the game store, and digitally online, cementing Wizards’ leadership in the fantasy gaming category and building on the company’s continued success within Hasbro’s family of brands. Watch the entire video presentation of Wizards Presents on YouTube on our Dungeons & Dragons and Magic: The Gathering channels and on our Twitch channels (twitch.tv/magicand twitch.tv/dnd) for details and commentary from the creative product designers.

“Wizards Presents” the following products and initiatives coming later this year, in 2023, and beyond:

Since 1993, Magic: The Gathering has thrilled players and card collectors. With more than 50 million fans to date, Magic is a worldwide phenomenon in more than 150 countries.

Dungeons & Dragons continues to innovate the tabletop and digital roleplaying genre with the next evolution of core rules to enhance players’ imaginations and enjoyment of the game. Crossover opportunities with the film and book industries can only add to the more than 50 million people who play D&D, fast approaching its 50-year anniversary.

ABOUT MAGIC: THE GATHERING
Magic: The Gathering’s compelling characters, fantastic worlds, and deep strategic gameplay have entertained and delighted fans for more than 25 years. Fans can experience Magic through the tabletop trading card game, the digital game Magic: The Gathering Arena, a New York Times bestselling novel, and a critically acclaimed comic book series. With more than 50 million fans to date, Magic is a worldwide phenomenon published in more than 150 countries.

Dungeons & Dragons has enchanted fans for nearly 50 years with innovative gameplay allowing friends and family to adventure in fantasy worlds together. The World’s Greatest Roleplaying Game boasts more than 50 million fans to date who have enjoyed the franchise through video games, novels, comics, roleplaying games, and accessories. A major feature film produced by Paramount Pictures and eOne, Dungeons & Dragons: Honor Among Thieves is poised to captivate audiences next year and fans can experience D&D online right now through easy-to-use tools on D&D Beyond.

Wizards of the Coast, a division of Hasbro (NASDAQ: HAS), develops legendary games that inspire creativity, spark passions, forge friendships, and foster communities around a lifetime love of games. Wizards delivers compelling experiences for gamers across tabletop and digital gaming through its best-known franchises MAGIC: THE GATHERING and DUNGEONS & DRAGONS and Hasbro’s unparalleled portfolio of approximately 1,500 brands. With headquarters in Bellevue, Washington and studios in Austin, Montreal, Raleigh, and Renton, Wizards is dedicated to fostering world class talent to create unforgettable play experiences on all platforms. To learn more about Wizards, please visit our company website and social channels (@Wizards on Twitter and LinkedIn).

Hasbro (NASDAQ: HAS) is a global play and entertainment company committed to Creating the World’s Best Play and Entertainment Experiences. From toys and games to television, movies, digital gaming, and consumer products, Hasbro offers a variety of ways for audiences to experience its iconic brands, including NERF, MY LITTLE PONY, TRANSFORMERS, PLAY-DOH, MONOPOLY, BABY ALIVE, MAGIC: THE GATHERING, and POWER RANGERS, as well as premier partner brands. Through its entertainment labels, Allspark Pictures and Allspark Animation, the Company is building its brands globally through great storytelling and content on all screens. Hasbro is committed to making the world a better place for children and their families through corporate social responsibility and philanthropy. Hasbro ranked No. 13 on the 2019 100 Best Corporate Citizens list by CR Magazine and has been named one of the World’s Most Ethical Companies by Ethisphere Institute for the past eight years. Learn more at www.hasbro.com and follow us on Twitter (@Hasbro) and Instagram (@Hasbro).

Games Workshop® Group PLC (LSE:GAW.L), based in Nottingham, U.K., produces the best fantasy miniatures in the world. Games Workshop designs, manufactures, retails, and distributes its range of Warhammer®: Age of Sigmar®, and Warhammer® 40,000® games, miniatures, novels, and model kits through more than 500 of its own stores (branded Warhammer®), the www.games-workshop.com web store and independent retail channels in more than 50 countries worldwide. More information about Games Workshop and its other, related, brands, and product ranges (including our publishing division ‘Black Library’ and our special resin miniatures studio ‘Forge World’) can be found at www.games-workshop.com.

Doctor Who is one of the longest running action-adventure television series in the world, spanning 59 years, and winning more than 100 awards. This quintessentially British show has a huge global following, with 9.6 million fans across social platforms/channels and 100 million video views on YouTube in the last year alone. It has been honored by Guinness World Records as the longest running science-fiction series in the world. Doctor Who has a proven track record in consumer products and live entertainment with more than 4.5 million Sonic Screwdrivers sold in the past 11 years, more than 13 million action figures sold since 2005, more than 19 million DVDs sold globally, and more than 1 million tickets sold for live events. Doctor Who logo and insignia © 2018 and TM BBC. Licensed by BBC Studios.