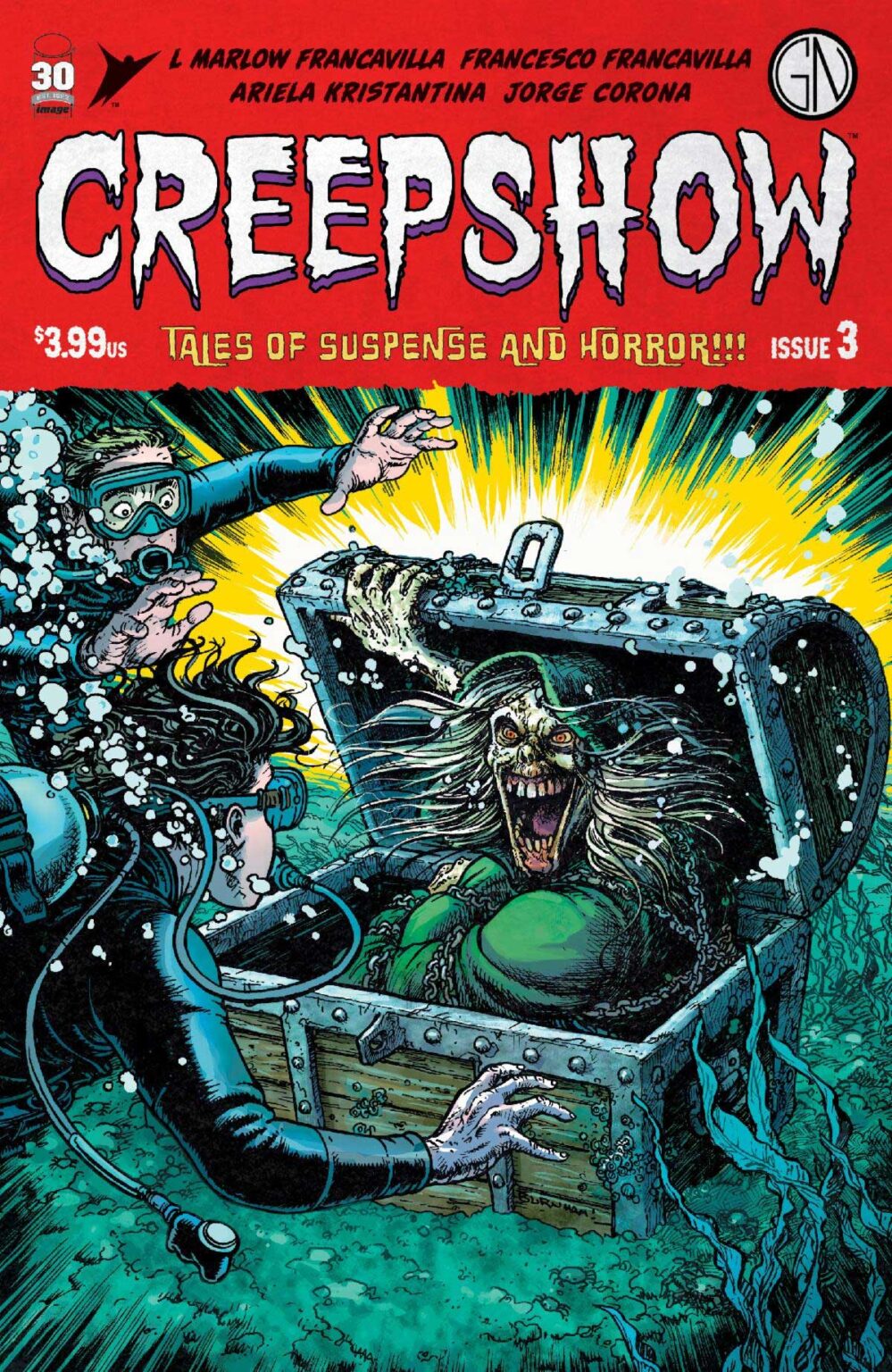 In the spirit of all iterations of Creepshow in pop culture, each issue of the Creepshow comic anthology series comes packed with two spine-chilling stories.

First, Francesco Francavilla (Night of the Ghoul, Detective Comics) and L Marlow Francavilla welcome you to a barbershop where the locals share tales of their greatest kills, and the hunters can just as easily become prey.

“We have always been HUGE fans of the CREEPSHOW franchise from the very first movie by George Romero and Stephen King, until the recent TV series by (dear friend) Greg Nicotero, so you can imagine how EXCITED we were when Skybound invited us to join this book with our own spooky tale,” said Francesco Francavilla.

“One of the side effects of the pandemic was spending more time at home in our own backyard and making friends with some very cute and smart raccoons and possums,” added L Marlow Francavilla. “Our conversations about their lives and adventures, and how they are perceived and treated was a huge inspiration for this story.” Then, Ariela Kristantina (Chain) and Jorge Corona (The Me You Love in the Dark) journey to a temple hidden within an island paradise, where many visit, but not everyone leaves.

“As a lifelong horror and macabre fan, it’s an absolute joy for me to contribute to the Creepshow anthology as a writer,” said Ariela Kristantina. “Most Indonesians coexist peacefully with the supernatural/superstition instances daily and the creepiest of folklores, many of which overlap with the natives’ cultures and religions. It’s very satisfying to share a story inspired by my values and background. On top of that, I get to collaborate with Jorge, one of my roommates/best friends since college. I witness him excel in various genres –from superheroes to young adult fantasy –so I’m excited to see the final pages!”

“”Being a huge fan of horror, I was ecstatic by the opportunity to add something to the world of Creepshow but, to also work alongside Ariela Kristantina? A creator I truly admire! A longtime friend! A former college roommate who I’ve witnessed being as creepy and macabre as the story she wrote for this anthology! Well, I’ve seen enough to know that I shouldn’t say no to this one,” said Jorge Corona. “Add to that the reunion with collaborators Alex Antone and Jean-Francois Beaulieu and you can bet it’s going to be a fun ride!”

In addition to the main cover by Chris Burnham, Creepshow #3 comes with an impressive lineup of variant covers, including a cover by Francesco Francavilla and a 1:10 incentive cover by Vance Kelly.

The Creepshow comic miniseries deal was brokered by Striker Entertainment.

Creepshow #3 (of 5) will be available at comic book shops and digital platforms including Amazon Kindle, Apple Books, comiXology, and Google Play on Wednesday, November 23, 2022.