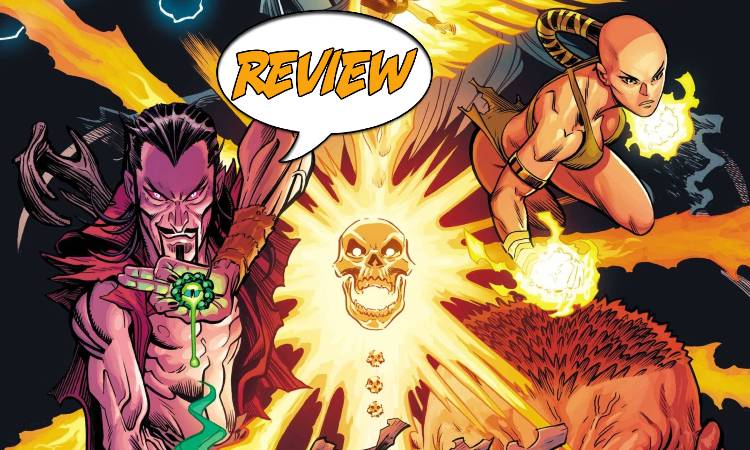 Odin of Asgard and the Phoenix Force of parts unknown would like to announce the arrival of their little bundle of joy… the child called Thor. Your Major Spoilers review of Avengers 1000000 BC #1 from Marvel Comics awaits!

Previously in Avengers 1000000 BC: They are the defenders of the dawn of time. Marvel’s first and mightiest legacy heroes. But their greatest secrets have never been revealed, until now. Witness the dark events that shatter their ranks, see how their lives come to shape the entire future of the Marvel Universe and be there for the monumental event that reunites them one last time: the true story of Thor’s birth.

A TALE OF LOVE, BEGINNING WITH A KISS

In the world of a million years ago, Laufey of the Frost Giants fell in love with an insectoid queen from the Negative Zone and their love nearly ended the planet. Fortunately, Odin, Phoenix, and the rest of the prehistoric Avengers were there to save the day, routing their forces and gaining the lifelong enmity of the King of the Giants. The battle cost the life of their Black Panther, sending the Panther Tribe into hiding and beginning what would become Wakanda, but Odin didn’t really care, having only eyes for the alien fire goddess. Phoenix rejected the future All-Father, but he called the remaining heroes together some time later to announce their engagement anyway. His hubris nearly drove the Phoenix from the planet, but she chose to stay to protect the planet’s inhabitants. She also visited the goddess Gaea, suggesting that the humans needed a protector, a more humane god who would take the needs of the burgeoning humans into account… The kind of god who would fight for Midgard and its people, maybe with a hammer?

AND ENDING WITH A SOUND OF THUNDER

This story finally explains the complex issue of Thor’s parentage, and it’s interesting to see Aaron working with the established canon of Gaea giving birth to the goddathunda. The conversation wherein mother goddess and fire goddess decide that they’re equally the mother of the child-yet-to-be is a good one and I enjoyed seeing the origins of the beef between Laufey and Odin. That said, this issue doesn’t really have much more than that going for it, with caveman Starbrand, Ghost (mammoth) Rider, and Iron Fist as glorified guest stars. I honestly can’t see why this story couldn’t have been presented in the pages of the Avengers home title, as the fight sequences that pad out the issue don’t really account for all that much. Walker’s art is attractive, with elements that remind me (appropriately) of historic woodcuts, but for some reason, the coloring is a little off-putting, especially when it comes to Phoenix

BOTTOM LINE: WHY A ONE-SHOT?

In short, there is nothing particularly wrong with this comic book, but Avengers 1000000 BC #1 doesn’t really have sufficient plot for a stand-alone story, with art that is lovely in places but doesn’t quite come together with the coloring and story that way I would have liked, earning 3 out of 5 stars overall. These events could easily have been the spine of a three-issue arc, a presentation that would have served the material better, in my eyes.

The untold story of Thor's birth and his mothers, which also represents the end of Earth's Mightiest Heroes of the era, leading to the all-important query: Why not tell this story in the pages of Avengers?