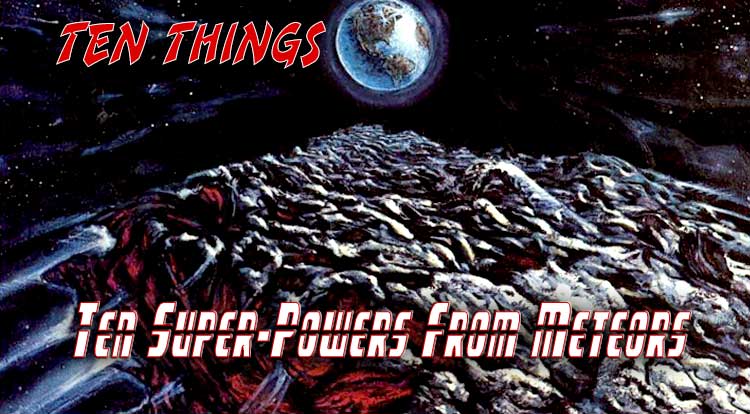 Some supers have magic rings, others utility belts. brimming with gadgetry. And then, there those lucky few who required only a little space debris. Welcome to Ten Things: Ten Super-Powers From Meteors!
Whooshman-Bicarbonate Films, in conjunction with An Amateur Comics Historian and Jefferson Reed, like whom there ain’t nobody bad, Presents: A physics professor in Ivy Town, Connecticut, Doctor Ray Palmer discovered a fragment of a White Dwarf star that he used to create a special lens through which he focused ultraviolet light, creating a unique shrinking (you should excuse the expression) ray. Though most things that he shrunk exploded, he used the ray on himself to escape a cave-in, because why not, becoming the tiny titan known as The Atom!

Of course, if he’s so smart, why doesn’t he know that once a meteor survives re-entry, it’s a meteorite? The world may never know. While hiking across the desert, Bonita Juarez was amazed to see a mass fall from the sky and crash into the sand nearby. Bathed in cosmic radiation of an unknown nature, Bonita found herself able to wield the power of heat and flames, taking on the name Firebird to represent a local legendary creature. In her first recorded adventure, she was a founding member of The Rangers, Marvel’s only Southwest super-team of the day, later becoming an adjunct member of the West Coast Avengers. When last seen, she and the Rangers were once again active, teaming up with the Scarlet Spider in Texas. A talented high school lacrosse player, Nagisa Misumi was excited to see a meteor shower, hoping to make a wish, only to have one of the “meteors” hit her squarely in the face. Rather than leave her dead, the space debris gave her superhuman powers, as it wasn’t a rock at all, but a creature of light called Mepple. Teaming with Cure White (whose fairy of power is named Mipple), Nagisa becomes the strong one of the very first Pretty Cure team, all because she wanted to wish to be more popular with boys.

Thanks to an encounter with a meteorite as a teenager, Jenny Johnson gained the full suite of Kryptonian powers, abandoning her best friend/love interest Barry. Of course, getting powers stunted her emotional growth, making her unable to form healthy emotional bonds and leading to an unhealthy relationship with a young man named Matt. After their inevitable breakup, she used her super-powers to torture him before finally realizing that it was Barry (AKA her nemesis, Doctor Bedlam) that she needed to balance her personality all along. First appearing in 1947, Peter Porkchops spent his youth battling back-and-forth with his friend Wolfie, who wanted to kill and eat him, Tom and Jerry-style. Years later, he encountered a fragment of a meteor that originated on Earth-1, crashing into the steel mill where he worked on Earth-C and transforming him into a Swine of Steel. As a member of The Zoo Crew under the command of Captain Carrot, Pig-Iron provided incredible might and an unstoppable appetite to the team. Struck by a “rainbow comet” as a child, Shego and her four brothers used their new super-abilities to form Team Go, the defenders of Go City. The more she interacted with bad guys, though, the more she began to appreciate the evil point of view. Eventually, she went full-on villainous herself, becoming the enforcer for Doctor Drakken, a not-particularly-masterful evil mastermind. It was in this role that she repeatedly clashed with Kim Possible, and possibly ended up in love with her boss. After being rejected by the draft board for service in WWII, Chris Kelly’s car was struck by a meteor(ite) which irradiated him and gave him supernatural powers of strength, speed, flight, and atomic fluoroscopic vision. One of the cornerstone characters of Big Bang Comics, Chris’ adventures are loving tributes to a certain Man of Steel, including his lady love Lori Lake, his pals in the Knights of Justice, and his near-identical Earth-A counterpart with whom he’d repeatedly team up. (You can always tell Earth-B Ultiman by his belt and lack of gloves.) Much like Cure Black, William Williams took a space rock to the skull. Unlike Cure Black, the impact literally cracked open said skull and dislodged his brain, only to have the meteor’s strange energies immediately heal his injuries and leave him nigh immortal and possessed of an inhuman mental process that expressed itself as unusual wisdom that he can use to talk villains out of their criminal lives.

He’s a member of a super-team with Stupid-Man, Here’s-Looking-At-You Kid, and a few others, even supplying the team’s name when he realized they should just call it Quits. Susan Murphy was just an average girl preparing for her wedding to a local weatherman when a hunk of space debris crashes her ceremony. The radiation not only turned her hair white, it also transformed her into a 50-foot-tall, super-strong giantess, with commensurate strength. Captured by the U.S. Government and given the codename Ginormica, Susan is housed with other “monsters” until an alien invasion forces them into service as super-powered commandos. Ginormica’s strength of limb AND of character prove to be the cornerstone of repelling the alien invasion, making her an international superstar superhero, and giving her a life of her own for the first time. One of 113 children born simultaneously under the light of a strange “comet” that burns up in the atmosphere, John Simon gained the ability to interact with electronics, seemingly one of the weakest powers among his cohort. As the other “rising stars” began to die off, their energies were shared by the remaining children, with each loss increasing the power wielded by any one of them. That’s when Poet’s ability to directly manipulate the energies that empowered them all became important, taking him from least powerful to most deadly of all and bringing their story full circle (in more ways than one.)

Once again, this week’s topic, Ten Super-Powers From Meteors, is all me, but feel free to follow along @MightyKingCobra to suggest a topic of your own! There’s always more Ten Things madness on my Twitter or check out the full Twitter archive here! As with any set of like items, these aren’t meant to be hard and fast or absolutely complete, if only because “hit by a rock from space” is a great way to empower a character without making it too easy to replicate. Not for nothing is it the origin story of one out of five Legionnaires. Either way, the comments section is below for just such an emergency, but, as always: Please, no wagering!