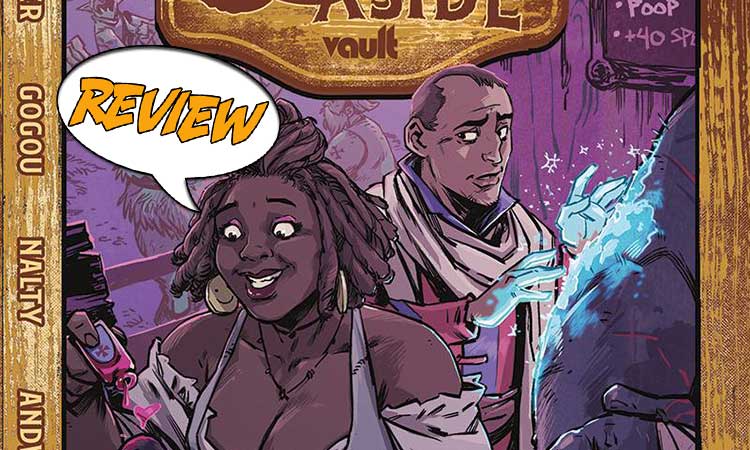 Quests Aside is on the verge of being shut down by the King! Not sure what to do, Barrow accepts an offer to sell to someone else. Will this save the tavern and its quirky staff? Find out in Quests Aside #4 from Vault Comics!

Previously in Quests Aside: Barrow finds a young brawler, Tavin, and invites him to return to the tavern for training. Mira wonders about Barrows issues with the King, and whether he has told any of his employees yet. Zuzanna breaks up with Ray, who is almost persuaded to join Harukos the Renewer, a necromancer. But Harukos wants to subjugate him, and Ray will have none of that. And later that night, a group of thugs attacks the tavern and sets it on fire!

Quests Aside #4 opens with a surprise as we meet the Scorpion Trust, a party of four characters led by the warrior Yartiel, who claim they are the new owners of Quests Aside. Earlier that night they were celebrating in the tavern, drinking, brawling, and having an all-around fun time. Vail tries to get Barrow to tell her why the King’s mercenaries attacked, but he is not ready to tell anyone yet. Jodan is more paranoid than usual, but he asks Zuzanna to talk with him outside.

Yartiel of the Scorpion Trust surprises Barrow in the privy. She and her group want to by Quests Aside. To her surprise, Barrow agrees. He only wants her to keep on the entire staff and not to tell them so he can tell them the next morning. Vail overhears.

Then we get Vail’s back story in the form of a song. We had a hint of this back in issue #1. She was a Princess of the Kingdom until a conquering King (and the present King in the story) invaded. She escaped the siege, found her way to the ocean, and became a pirate who longed for the chance to attack the King someday. She fell in love with the captain who later threw her overboard. Reaching shore, she made her way to Quests Aside and got a job.

And then we reach the point in the evening where Goroll and her mercenaries attack Quests Aside and find it in the hands of Yartiel and the Scorpion Trust, who fend them off. Meanwhile, Jodan sneaks off to a cave in the woods where he is taking magic lessons. At the tavern, during the post-skirmish celebrations, Mira has learned of Barrow’s sale and how he is hoping this will save his staff. Yartiel invites Barrow to drink with her, and they share stories of the weird curses they have acquired. Then he comes clean and tells her that the King is coming to shut them down.

HAUNTED BY THE PAST

I enjoy the art of Quests Aside #4. The introduction of the Scorpion Trust is as fun as it is a surprise. We have seen other groups that resemble adventuring parties from a role-playing game, and each one has its own idiosyncrasies. The Scorpion Trust is no exception, and I appreciate the fact that three of its members are women. After their introduction, the Bard takes us back to explain things. The Bard’s narrations are quite handy and short, letting the art tell us more. We understand immediately that the Scorpion Trust are a good fit, if it is true that Barrow sold them Quests Aside.

All through the story Barrow has had what appears to be a ghost hanging out with him, a ghost no one else can see and who looks like a younger version of Barrow. He dresses differently, so I have not been sure of just who he is supposed to be. Thankfully, Yartiel seems to know and asks Barrow about him. There is one other time when the art is a bit confusing. Vail’s story is presented in faded colors to indicate it is a flashback. However, the fading is so slight that I did not catch it at first. Since her story was still colorful and was also presented as a song, I just did not see it. It pays to be attentive.

Quests Aside #4 is a blend of jokes, adventuring tales, and a bigger plot that is somewhat obscured by the first two. Despite this, it is a solid read with some twists that keep it interesting.

Did Barrow really sell Quests Aside when we weren’t looking?