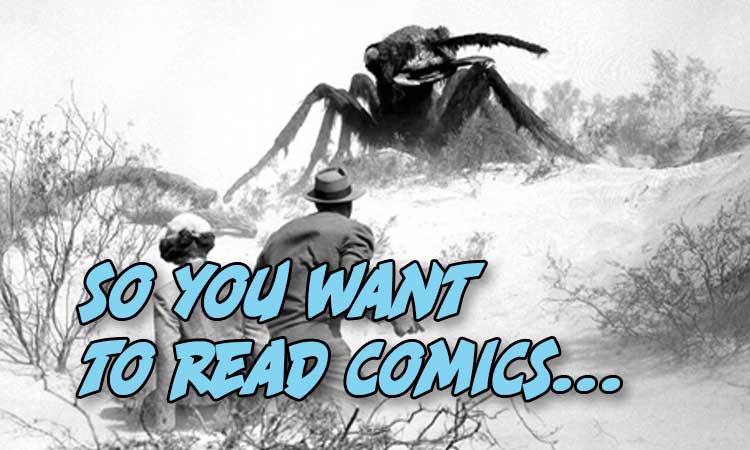 It’s getting a little cheesy with this week’s “So You Want To Read Comics”.  This is our weekly feature where we take a look at a single topic or genre, then give you two comic book recommendations, perfect for new readers, based on that topic or genre.  This week, we’re taking a look at B Movies.

The term b-movie comes from the golden age of cinema, where there were far more film releases and the demand to spend more time in a theater watching movies was higher.  The “A Movie” would typically be the main feature with the bigger budget and typically considered to be of higher quality.  While the B movie had a lower budget and was designed as a cheap way to add extra content to lure moviegoers into the theater with the promise of getting “2 for the price of 1”.  These films went on to be known for pandering to audiences with promises of wild sci-fi adventures, cheesy horror, raunchy (for the time) comedy, and just a bit of skin.  And, while they were originally designed to be easily consumed but forgettable, B movies have gone on to have a cult following and become inspiration for others trying to mimic the look and feel.

Here are a couple of comic book series that captures some of the feel of those old b movies.

Night of The Ghoul

Night of The Ghoul takes place over two different plot lines.  The first being that of an old horror film fanatic and his son traveling to meet the creator of a long-lost, mysterious film.  And the events of that film itself.  It becomes apparent though that the events of the film aren’t completely fictitious and some of those monsters are very real.  This series acts both as a tribute to a forgotten age of cinema, while also taking its place amongst the stories it was inspired by.  Featuring art by Francesco Francavilla, who has mastered retro art,  this comic series does a great job of capturing the feel of old B movies with its writing, somehow it also looks like an old B movie without actually featuring real life characters.  The collected edition of this is due out August 23rd, but the individual issues are available for free with a comixology unlimited account.

Set in the near future, a group of scientists find themselves strapped for cash, so they turn to the one place they’re sure to make money, adult-entertainment.  And not just your run-of-the-mill skin flick, but scenes featuring aliens.  While sex is often times the goal of the characters in this series, that doesn’t stop it from featuring a lot of fun science fiction.  The main appeal of this series is that it doesn’t take itself too seriously.  It’s not so much concerned about deep philosophical ideas as it is with presenting fun romps to be enjoyed, much like the b movies that did a lot of the groundwork that made science fiction what it is today.  There are currently three volumes available in this series, with each one featuring a different type of adventure, so there’s plenty to satisfy a new reader getting into it.

What are some of your favorite B Movies? What did you think of these recommendations? Let us know in the comments section below.