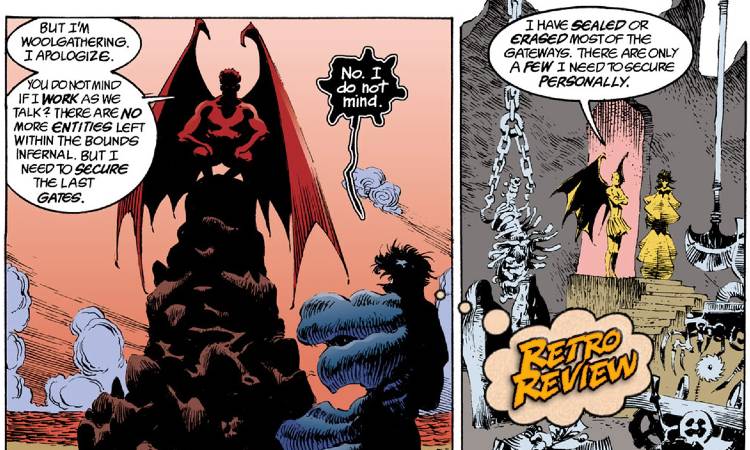 Whether or not you’ve gotten the chance to check out Netflix’s Sandman series, you may be wondering what it’s all about. Fortunately for you, we keep our issues numbered for just such an emergency. Your Major Spoilers Retro Review of The Sandman #23 awaits!

Previously in The Sandman: Dream is one of The Endless, seven beings beyond the boundaries of life and flesh, each of whom represents some sort of universal constant. His elder siblings Death and Destiny have their own realms, as do younger sisters Delirium, Despair, and younger sibling Desire, but Dream is responsible for the worlds one can only visit while asleep. Netflix new series covers a lot of the first two arcs, while our Major Spoilers Classics Podcast episode 1 gets all the way through the first 20 issues. With respect to those who might want to watch the show, we’re going to jump ahead a little bit to see one of the most shocking moments of the first half of the narrative.

We begin with Morpheus arriving at the shores of Hell itself. The last time Morpheus interacted with the fallen angel Lucifer, it was to retrieve his helmet of power, an interaction that ended with him humiliating the Lord of Hell in front of his various subjects. That makes his return, to free his one-time love, Nada, from eternal damnation, awkward in a number of ways. Not only has he swallowed his immortal pride and come to save a woman he personally damned for the crime of simply saying “No.” When he finds her cave empty, he is confused, but when he realizes that there are no screams, he realizes something is wrong. Seeking out Lucifer, Dream finds an answer he never expected. The art of Kelley Jones is always something of a mixed experience for me, as his elongated figures, with their visible bones where bones shouldn’t be visible can cause the skin to crawl. Here, as two inhuman creatures stand face to face in Hades, it’s absolutely appropriate… but I’m still incredibly creeped out. Morpheus is taken aback to hear that his fellow king has given up his requisite, but when he realizes that Lucifer has given up the regal “We,” he knows it’s no game. Lucifer sets out to finish the last of his duties, including removing the last of the tortured souls from the afterlife. Of all the terrors of Gaiman’s narrative of The Endless, this moment is one of the most haunting for me. The idea that a person could be so convinced of their own evil that they REFUSE to accept their freedom, insisting that they deserve their eternal damnation is utterly twisted. It’s pure arrogance and when Breschau is sent away and the last of the demons dispersed, he has one last favor to ask of the Lord of Dreams: Cut off his wings so that Lucifer can go on his way. That last panel is still utterly horrifying to me, not for the sentiment (though a world full of revenants is horrifying enough in itself) but for the look on the devil’s face. When Lucifer explains how ten billion years of running the pits of fire have affected his mind, you almost sympathize with him. When he explains that the petty humans consistently blame him for events he had no influence on, endlessly saying “The devil made me do it,” it’s truly uncomfortable how much we, the readers, feel for the literal devil. And then, his parting words make it all that much worse. He promised to destroy Dream. And perhaps he has. The best part of The Sandman #23 is how it serves both as the second chapter of a sprawling, centuries-long narrative and as a stand-alone story, with the art of Jones and Jones III adding to the creep-factor of it all (albeit a bit more than I’m comfortable with, even for a story meant to be uncomfortable), making for an utterly riveting 4 out of 5 stars overall. I honestly hope that the events of this story get adapted for television, as the idea of Gwendoline Christie getting to explain the endless drudgery of eternal life in the hereafter seems like it will make for a great episode.

The art is incredibly disturbing, which fits the tone of the story, but upon first reading you may not fully comprehend the horror of what has happened here.