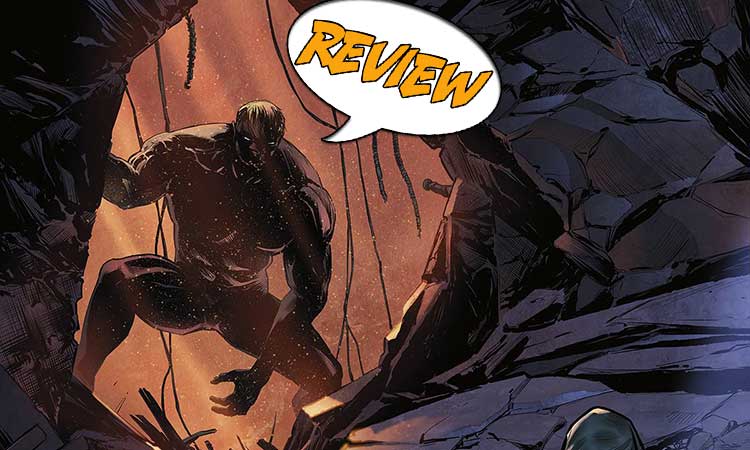 Life at St. Lilith’s continues to be full of challenges. The staff are overworked, and when a building collapse threatens Luis and Nat, Luis makes a difficult decision. What ramifications will this have for him and Nat? Find out in The Ward #3 from Dark Horse!

Previously in The Ward: Nat Reeves finds herself back where she never expected – her old job at St. Lilith’s, a hospital for the supernatural. She finds herself in the sewers under the city with a giant about to deliver a baby. But the baby is in breech and her work is further complicated by a pair of monster hunters filming their trip through the sewers. Back at the hospital, Dr. Cervantes finds his hands full with a gelatinous cube that ingested a panhandler and a banshee who overdosed. Cervantes loses the banshee, but Nat rushes in with the baby giant whose heart stops. Cervantes saves its life with a precordial thump, but Nat recognizes the stress he is suffering and catches him taking a troll stimulant to make it through the night.

ANOTHER DAY, ANOTHER DISASTER

The Ward #3 opens with Nat and Luis talking, checking on each other under a pile of rubble. Earlier, Nat is out on a call and arranges for Lydia to send one of her duplicates to look after Tammy. Nat has not told her mother that she is back at the hospital. She and Ceri meet Luis at a boarded-up building on the verge of collapse. An estimated hundred workers are trapped inside. It is a sweatshop that uses magic to expand the internal space and that magic is failing.

Luis calls in to the hospital to alert them and learns from Dr. Kumasaka that if there is a security breach, St. Lilith’s could lose its funding. As if that is not bad enough, Nurse Black has duplicated herself twenty-seven times. Another emergency patient arrives. The hospital has no one else to spare for the sweatshop.

Nat cannot help but try to save as many immigrant Hob workers as she can. Then the hex fails and the building collapses. Nat is trapped under a beam. Luis has a broken arm. He starts to get frustrated, and Nat hears it in his voice. She tries to reassure him, but he is not receptive. Instead, she tries to distract him with her own story, which is a clever way to fill us in as well. Her father, Dr. Jonathan Reeves, was the expert in preternatural medicine. She was proud to follow in his footsteps, even when the hours were long and stressful. But when another resident had an incident that killed him, Nat had to walk away.

Luis thinks she is trying to talk him into quitting. Not so – she only wants to steer him away from taking troll supplements. Instead, he maneuvers enough to reach inside his jacket pocket to where the pills are.

Outside, Ceri and Lydia call in to the hospital as gawkers with cell phones start to wander by. A thud from the rubble draws their attention. With a final crash, Luis, now a troll, walks out holding Nat. He gives her to Lydia and returns to the rubble to rescue more Hobs. It is not until he happens to see his reflection in a piece of broken glass that he realizes what he has done to himself.

Nat awakens in the hospital with a broken leg, and a furious mother in her room.

I like the opening of The Ward #3. Not only is it in media res, but the use of dark space between panels slows down the time as we take in the fact that Nat and Luis are buried. The use of shadows continues throughout as we shift back to the accident. I also like the way Nat’s and Luis’s expressions are captured. Nat has more experience with St. Lilith’s, so she is resigned and patient. She may not be hopeful, but she understands that they must rely on outside help. Not so with Luis. He has been under stress. As much as he resents Nat, he also wants to prove himself, to show that he belongs. We understand how he makes his decision.

This is a world where the supernatural tries to stay hidden from the mundane world. From outside, the sweatshop looks like a small, boarded-up building. Inside we see the craziness of a magical vortex forming in a space much larger than it should be. Fabric, garments, tools, and Hobs swirl around with no clear up and down. Even worse, holes in the magic open and close. Luis tries to catch a Hob falling through one but cannot pull him back before the hole closes on him, amputating both of the Hob’s legs. Details like this make the collapse understandable and compelling.

BOTTOM LINE: AN EXCITING BLEND OF DRAMA AND URBAN FANTASY

The Ward #3 continues to be dramatic as well as interestingly chaotic. St. Lilith’s is like a normal hospital on steroids – or even troll supplements – and it is a gripping and entertaining read.

Working at St. Lilith’s has its consequences, and so does keeping secrets from one’s mother.