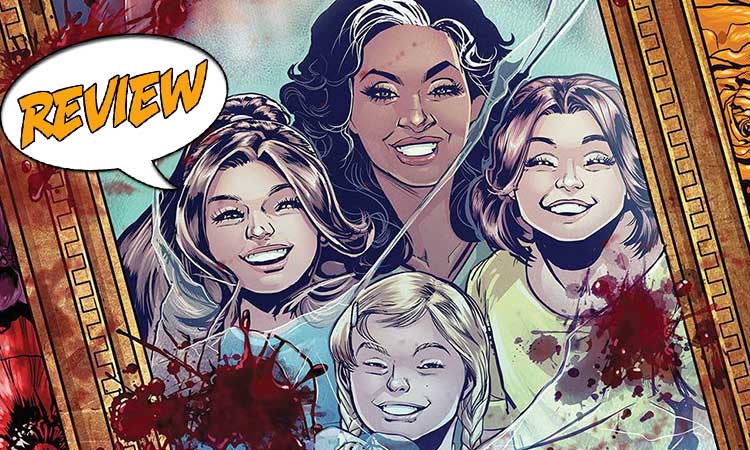 Jasmine Hawthorn is dead. Her three estranged daughters reunite and are determined to find the murderer. But what drove the daughters apart, and what other secrets was Jasmine hiding? Find out in The Deadliest Bouquet #1 from Image Comics!

Previously in The Deadliest Bouquet: Jasmine Hawthorn is a flower shop owner with a mysterious past. But now she is dead, leaving behind her three estranged daughters and a whole lot of family baggage. But blood runs thicker than water. Can they solve the mystery of Jasmine’s murder before the police?

The Deadliest Bouquet #1 opens in 1998. Rose Hawthorn dials 9-1-1, then hangs up. Instead, she calls her sister Poppy in California to tell her that their mother is dead. She was murdered in her flower shop, which is where Rose found her. Poppy asks what the police have said, then scolds Rose for not taking care of their mother. But what Rose wants is for someone else to be there with her, and Poppy agrees to come home.

Rose calls the police, and they arrive. The detective notices a tattoo on Jasmine’s hand, and one of his officers identifies it as a Cross of Lorraine, a symbol of La Résistance – unusual because Jasmine does not seem to be old enough to have been in World War II. As they discuss the daughters, we learn there is still one more. As if on cue, Violet walks into the shop. Of the three sisters, we immediately see she has the most attitude and a distinct disdain for rules.

The three sisters are united, and we shortly learn their childhood nicknames – Violent Violet, Princess Poppy, and Responsible Rose. Violet also asks why Rose was not taking care of their mother. Rose accuses the other two of running away as soon as they could, leaving Rose with the responsibility. But then they discuss their mother. Violet is surprised that anyone could have gotten the drop on her. Rose mentions a local extortion racket, but Jasmine had shooed them away. But she was having problems with headaches and paranoia.

Poppy and Violet nearly come to blows, and we see a flashback of them fighting as kids. Violet decides to walk out, and Rose throws a knife which nearly brushes Violet’s face, and we see a flashback of her throwing knives. Poppy’s husband arrives with their two small children and from him we get a comment that the women’s family was somewhat dysfunctional. We continue to see flashbacks that hint at a dark past that they share.

Poppy goes with Rose to the house, where she is overcome with memory, and we see a flashback of the girl’s father lying dead at the bottom of the stairs. Then their mother orders them to get a tarp. In the meantime, Violet goes looking for the gang that was trying to extort money from their mother.

The art of The Deadliest Bouquet #1 is spare and to the point. The three women are drawn in such a way that it reflects their nicknames. Rose wears jeans and plaid shirt. Her hair is pulled back in a ponytail, nothing fancy. Poppy is the perfect mom. She may have flown across the country, but her dark hair is perfectly styled, and her clothes are comfortable but fashionable. Violet arrives wearing combat boots with a leopard print miniskirt and a sneer across her angular face. Each of them has expressions that flash across their faces, changing from one second to the next.

Small flashbacks are scattered throughout the issue. They are slightly sepia toned, so we understand that, but they are literally flashbacks, momentary memories that connect to the present. We do not understand what is happening in any of them or why, at least on a first read. But as the women reference the past and we look at the memories again, we start to realize that Jasmine had a past, and her daughters did not have an ordinary upbringing.

BOTTOM LINE: OFF TO AN INTERESTING START

The Deadliest Bouquet #1 sets out to be a murder mystery with the three sisters dead center. But it looks as though this mystery may have deep roots, and that makes it intriguing.

Three estranged sisters find themselves united in trying to find their mother’s murderer.