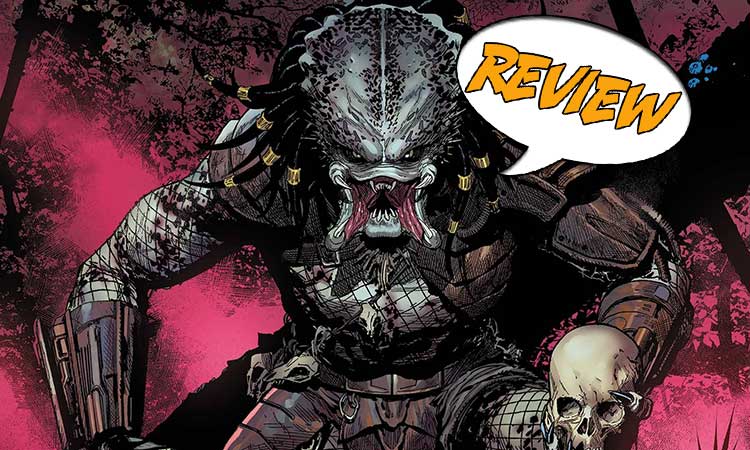 The Predators are back, but this time, they’re not the ones doing the hunting.  Your Major Spoiler review of Predator #1 from Marvel Comics, awaits!

Previously in Predator: In the near future, a young girl sees her family slaughtered by the deadliest and most feared hunter in the universe: a Predator. Years later, though her ship is barely holding together and food is running short, Theta won’t stop stalking the spaceways until the Yautja monster who killed her family is dead

DAY OF THE HUNTER

Predator #1 opens with two Predators battling it out, until one gains the upper hand and decapitates the other.  At this point, it removes its mask and reveals itself to be a human.  At this point the narrative shifts between two time periods: the past, the year 2041, and the present, the year 2056.  In the past, we see a young girl named Theta, who has come to a planet with her parents and the rest of a ship crew.  They are suddenly attacked by a predator and soon everyone except Theta and the ship’s A.I. is left slain.  In the present, Theta must make a quick getaway when the locals of the planet she’s on mistake her for being a predator.  With her ship in need of repairs, she sets a course for the nearest outpost,

Predator #1 does not have a completely original concept.  Flipping the dynamic between hunter and hunted is something that is commonplace in a lot of media.  But, that’s not to say that they don’t execute on their concept well.  The fervor that Theta has in her pursuits is intense and captivating.  There’s also a clever use of parallels and echoes of story beats used when the action switches from the past to the present, particularly with Theta’s relationship with her mother and the ship’s A.I. The biggest flaw in this comic comes from the depiction of the eponymous Predator.  Gone is the mysterious and deadly hunter that first debuted in 1987, here what we get is a seemingly bloodthirsty monster more concerned with wholesale slaughter than any sort of sportsmanship.  While the murder it commits is devastating, it does nothing to establish this creature as anything other than a blunt killing machine which diminishes its effectiveness as an antagonist.

The two things that an action-focused comic needs to do is to make sure that action looks good and makes sense.  Predator #1 has both of these.  The fight at the beginning looks good and has a nice cinematic feel to it,  while the attack on the ship crewmembers later on is brutal and shocking.  Yet, in both of these instances there’s a nice amount of restraint shown that keeps this from becoming a gratuitous gorefest.   The look of The Predators is also a highlight,  here the armor looks sleek and imposing, giving the wearers an intimidating look.

Predator #1 introduces an intense, albeit a little cliche, revenge story and does so while looking good.  It falters though when it comes to the main antagonist, which is an unsubtle and basic monster that just happens to have cool armor.  3 out of 5.

Predator #1 is a fine addition to the library of other comic books featuring the fan-favorite alien, but it doesn’t do anything to really capitalize on its titular character.