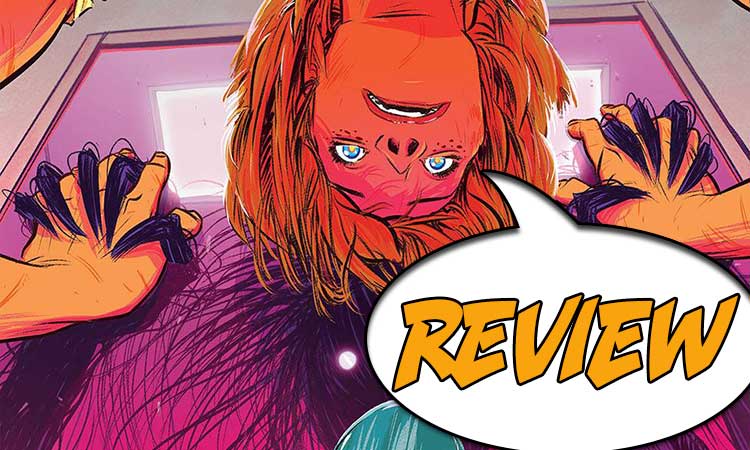 Stetson desperately races to prevent Valkira from entering the waking world. But who is this nightmare and why does she seem to know Stetson so very well? Find out in Slumber #6 from Image Comics!

Previously in Slumber: Valkira and Stetson are in a deadly game of cat and mouse. Valkira realizes that she is a shadow who wanders through people’s dreams, and now she resides in Ed. She gave herself up to Jiang and wants to talk to Stetson. She claims they have something in common. She kills people in the waking world the way Stetson kills nightmares. Stetson decides to enter Ed’s dream with Finch as backup. She knows Valkira’s plan is to leave the nightmare and enter the real world, and there is a red door that is her way out. In her search, she discovers that there is a link between Valkira and Lyla, who is Stetson’s own daughter. Meanwhile, her office is raided by the police!

EMOTIONAL IN ALL THE RIGHT WAYS

Slumber #6 opens with a memory from six years ago when Lyla was a child with nightmares. She draws on the walls in her sleep, but now complains of a voice that talks to her not only in the dreams, but also while she is awake. It tells her to do things. Although Lyla is young, Stetson tells her that she too always hears a voice. She learned to manage it by giving the voice a face and a body, saying it seems less scary when you know what it looks like. Was she right?

In Ed’s dream, Lyla describes how the nightmares Stetson kills do not actually go away entirely. They leave the dreamer, but they stay with Stetson. The dream Lyla claims she can help get rid of the nightmares.

Meanwhile, the lab is raided, and Finch is set upon by upset Eds. Jiang is hungry and has apparently eaten a cop. Finch demands that he get Sadie to someplace safe. Instead, he decides to use her as bait for the police. After a few more moments of chaos in the dream, everything becomes calm, and Stetson walks in with Lyla. Finch reminds her this is not really her daughter. Stetson says that Valkira started inside her daughter, and now she is the only part of her that is left. This is touching and convincing right up to the point where Stetson grabs her and orders Finch to flame them both.

Stetson is knocked out, but Valkira shifts her form and turns out the light. She has a chilling little conversation with Finch. She claims that all she ever wanted to do was to return home. Then she challenges Finch, claiming that when he killed someone, it was him. He is afraid of how good it felt. Stetson returns, distracts Valkira, and buys Finch enough time to throw the explosive at her.

It only slows Valkira down for a moment. She assumes Stetson’s likeness and moves toward the red door. Stetson calls Jiang to warn him to shut it down. But he has a slight problem, namely that after the police raid, he and Sadie are on the run. There is no one guarding Stetson’s office. I will not spoil the ending, but it is powerful, and it was set up so deftly that it just feels right.

The art of Slumber #6 is a tour de force of contrasts. Lyla and Valkira are connected, and between the two of them we have the innocence of a young girl and the horror of a nightmare-turned serial killer. The opening scene with Stetson and Lyla is as touching as you would ever hope to see between a mother and her daughter. Even though her own sleep is disrupted, Stetson is careful to be patient and calm with her young daughter, and it is not until the present that Stetson realizes she caused the inadvertent creation of Valkira.

Valkira, as Lyla draws her, is a dark scribble with red eyes. The red eyes are her tell. In the big battle, her form is as fluid as a shadow. She can disappear into a puddle of darkness. And when she turns out the lights, she is truly terrifying. Her size and shape can be whatever she desires, whatever is more useful for bringing out chaos.

BOTTOM LINE: CAN A NIGHTMARE EVER TRULY BE BANISHED?

While Slumber #6 can be a little hard to follow, it does reward the patient reader. The action is tense. The art works well with a story that floats around like the memory of a dream. But all the loose ends are tied up in a way that is as satisfying as it is chilling.

Stetson edges closer to the truth and finds it hits uncomfortably close to her!