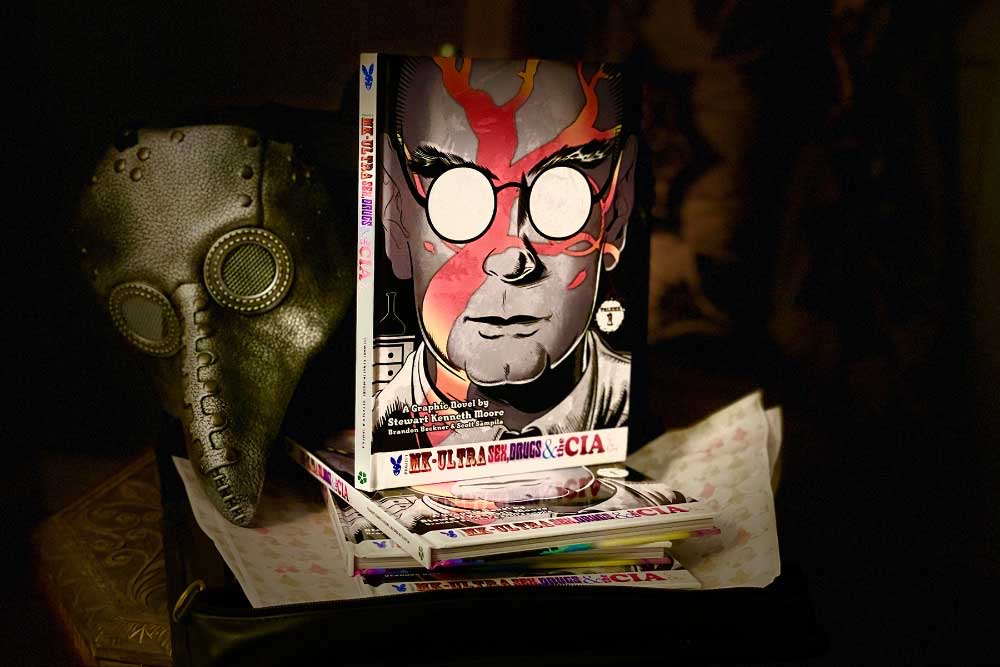 San Diego-based publisher Clover Press is going back to press on the sold-out PROJECT MK-ULTRA: SEX, DRUGS AND THE CIA. Permeating pop culture over the decades, Project MK-Ultra has been a favorite conspiracy theory with a wide range of speculation. Was this merely an experiment in brainwashing and interrogation, or was it something even more nefarious, as depicted in media like Stranger Things, The X-Files, The Manchurian Candidate, and American Ultra?

“If Volume 1 is ‘mind control,’ Volume 2 is ‘minds out of control,’” says creator Stewart Kenneth Moore, who adapted and illustrated both volumes, based on a screenplay by Brandon Beckner and Scott Sampila. “MKULTRA was a state-sponsored attempt to control thought, but it escapes the lab in Volume 2, fueling the counterculture of the 1960’s and generating a pandemic of free-thinking.” Moore, also known for his dynamic JUDGE DREDD covers for 2000 AD, adapted, penciled, inked, colored, and lettered both volumes of PROJECT MK-ULTRA using different art styles and approaches for the varied scenes and eras depicted in the graphic novels. PROJECT MK-ULTRA: SEX, DRUGS AND THE CIA tells the tale of Seymour Phillips, a journalist eager to prove himself, who discovers key information uncovering a vast drug network – possibly run by the CIA.

“With Volume 2 scheduled for release in October, it is important that retailers and readers who may have missed the first volume are still able to pick up the first part and enjoy the entire story” said Clover Press publisher Hank Kanalz.