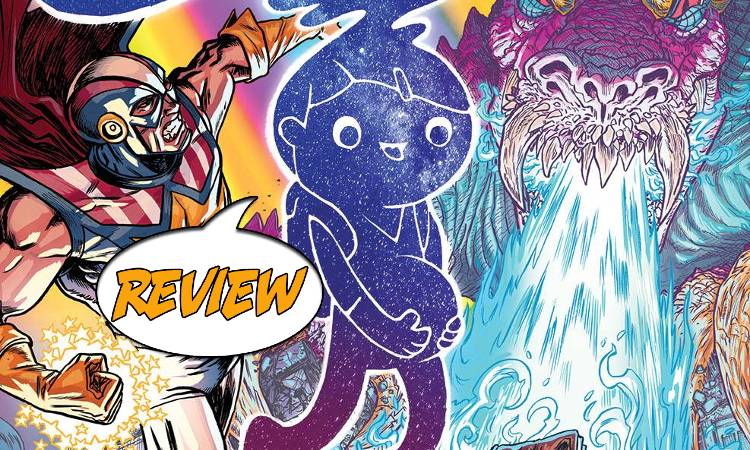 The first week of genie-wishes cut Earth’s population in half. What will the next few weeks bring? Your Major Spoilers review of Eight Billion Genies #4 from Image Comics awaits!

Previously in Eight Billion Genies: As the world continues to change in the wake of genies appearing to everyone on Earth and offering them a single wish, things are getting intense! Plenty of folks have wished for superpowers, and we all know what happens when you get a bunch of superpowered people together. They fight! How will our heroes survive The Powered Age?

After wishing for super-powers, twelve-year-old Robbie Green leaves the Lampwick Bar and Grill in the hopes of finding a safe haven for his father and resurrected mother. But he’s not the only one to wish for superhuman abilities, and he quickly gets wrapped up in the business of caped people: Punching each other. The survivors in the Lampwick settle in as the world goes even madder outside, slowly growing to know and trust each other. They also wonder what has happened to those outside, as the days stretch out with no contact from the outside world. As Robbie continues to battle other superheroes, his parents share stories with the others in the bar, until everyone has spoken and everyone has shared their reality, even the heavily pregnant Mrs. Zhang.

But then, a heavily sauced Alex slurs out the one question that no one has asked, confronting the silent bartender Will with the question that changes everything: “Who are you, man?”

Will’s answer is a stunner, and it leads us to two important reveals: One, Robbie has finally come to the end of The Powered Age, flying into space just in time for the other important reveal: There are barely one million people left of the eight million who were alive when the genies arrived, and a new era has come for those who remain. It’s a startling moment, even given the sheer carnage that Robbie/Son Man has been involved in for the last two months. Another comes when Zhang’s genie explains to her the truth of what’s going on with Mrs. Green and the explanation that the genies are a sort of “cosmic safety valve” for when reality gets weird. Browne’s art is perfectly suited to the tone, shifting from imaginative madness in the skies of Tokyo back to Will scrounging through his supplies for lemons to make a pie. It’s astonishing how creative and well-rendered these pages are, and once again the caricature genies are amusing as heck, especially the ones Robbie encounters on the final page. Still, the most remarkable achievement is the close-up of Will’s response to Alex’s armor-piercing question.

BOTTOM LINE: THIS ISSUE IS A WINNER

Every issue of this book has shaken things up in satisfying and frightening ways, but Eight Billion Genies #4 ups the ante with a key reveal and does it all with the same addictive pacing we’ve seen in the first three issues, earning 5 out of 5 stars overall. If the remaining issues are this good, I’m going to be buying this one again in collected form, the better to loan to friends.

Robbie's wish gets very complicated, very quickly, and the biggest twist to date literally left me gasping. Well worth your time.