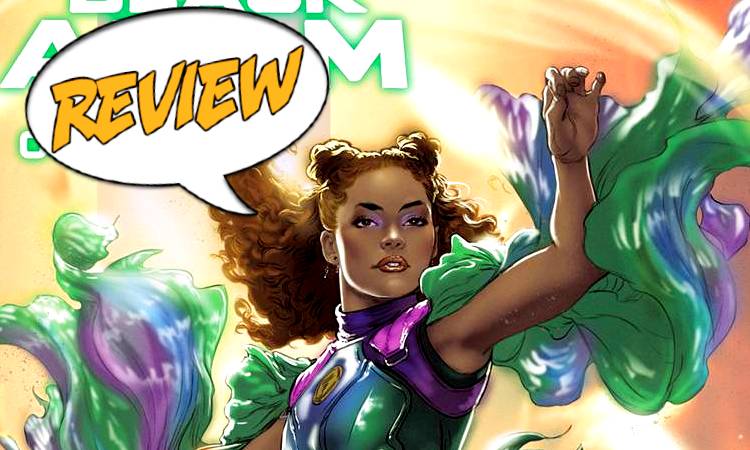 Maxine Hunkel has always idolized the JSA. Now, they want her to join them! Your Major Spoilers review of Black Adam – The Justice Society Files: Cyclone #1 from DC Comics awaits!

Previously in Black Adam – The Justice Society Files: When she was young, Maxine Hunkel dreamed of flying with the Justice Society. Now she finally has the powers and the opportunity… but will she say yes? Meanwhile, trouble hits home for Adrianna Tomaz as Intergang mercenaries invade the hallowed halls of her university, on the hunt for the sacred totem she liberated.

But what strange metal is the idol made from, and why does Intergang need it so badly?

As we open this issue, we see Maxine as a child, idolizing the Justice Society and wishing that she could get powers to join their number. Cut to the present, where she has been given super-powers, but hasn’t quite put everything together yet. When a drug dealer takes a strange substance that makes him “hulk out,” Maxine leaps into action, using her wind powers to bring him down. Her inexperience works against her, though, leading to injured bystanders and a lot of collateral damage, as well as an angry cop who deems her a freak. Of course, when she investigates further (with the help of Hawkman) the truth of the source of the illegal substances makes his anger less understandable and far more suspicious. The second story in the issue follows Adrianna Tomaz as she continues to investigate a mysterious artifact made of Eternium, only to find herself stalked by mysterious masked men.

THIS IS NOT A ONE-SHOT

I picked up this issue mostly because I always enjoyed Maxine Hunkel’s pre-Flashpoint concept more than any of the execution (especially since the cover artist and the interior creative team never seemed to be on the same page vis a vis her age and general sensuality). This story, though, is nothing more than a prelude, a first chapter that never gets past the introductions. In fact, Maxine doesn’t even have a costume by the end of the issue, making the lovely cover illustration a doubly frustrating example of the ol’ bait-and-switch. Neither interior art team is quite as evocative as Kaare Andrews’ illustration, with the backup story featuring very plain layouts throughout. Both art teams have their moments, certainly, but several moments required multiple read-throughs to fully parse, and the flashbacks to ancient Kahndaq were confusing from top to bottom.

Overall, Black Adam – The Justice Society Files: Cyclone #1 is the victim of questionable marketing that presents it as a one-shot when it isn’t, with some storytelling wobbles that make it a frustrating read and a price tag that is in no way justified, earning a right-down-the-middle 2.5 out of 5 stars overall. Those of us who remember the in-name-only movie tie-ins of the 1980s will likely recognize this issue for what it is: An enhancement for those who have seen Black Adam, rather than a comic that stands on its own merits.

The problem with a series of numberless one-shots is in figuring out what you need to know, and since this is absolutely part two of six, it's a problem in both execution and presentation.