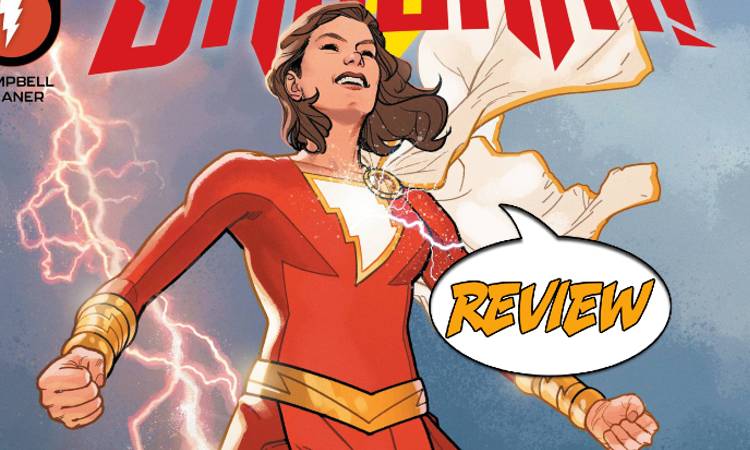 Don’t call her Mary Marvel… She’s the all-new Shazam! Your Major Spoilers review of The New Champion of Shazam #1 from DC Comics awaits!

THE NEW CHAMPION OF SHAZAM #1

Previously in The New Champion of Shazam #1: Mary Bromfield has set off for a voyage of self-discovery as she prepares for her freshman year of college and a civilian life. But nothing is ever truly normal for this young hero, because she’s just been chosen as the new champion of Shazam! (At least according to a talking rabbit sent by her estranged brother Billy.) Will she embrace the power? Or will it die alongside this world’s hope of survival against the mysterious magical forces waiting to take control?

A NEW START FOR MARY

For those who haven’t been following the events of Teen Titans Academy, Billy Batson was forced to sacrifice the power of Shazam to lock away a great evil, a process that left him on the OTHER side of the dimensional void. This issue begins with Mary, the eldest of the Vasquez family’s kids, setting off for Vassar, the college of her dreams and settling in to her new life. Of course, her roommates seem like the coolest person she’s ever met, and she might have decided to change her name to Marina on a whim and also, her roommate’s pet rabbit is talking to her. In public, no less, while an auditorium full of onlookers watch in stunned silence. Horrified to become The Weird Girl on her first day, Mary flees, only to have Hoppy teleport her into a crisis situation requiring the power of Shazam. This, too, requires some adjustments, as she’s no longer sharing with all her siblings, making her FIVE times more powerful than she remembers. Still, the new Shazam makes short work of the super-villain and returns to her dormitory, where an even bigger problem awaits her.

As happy as I am to see Mary back as Captain Marvel and/or Shazam (the issue doesn’t expressly name her caped form), I’m even happier to see that the script takes into account the varying portrayals of Mary since the retcons that created the Shazam family. It’s actually really fun to see a teenager admitting to her various phases, from know-it-all to angry girl to big sister, and it adds depth to her characterization. The premise of having Hoppy as her conduit to the magic is cute, but if you’re worried about too much whimsy in your comics, you should know he is drawn photo-realistically throughout the issue. Shaner’s work is excellent throughout these pages, especially in the transformation and the fight scene that immediately follows it. His characters are extremely expressive, and it’s easy to see why Mary thinks that her new roomies are so much more mature and cooler than she is. The final page reveal of the likely plot is both unexpected and perfectly timed to set off her first solo book since the 1940s.

My biggest issue with post-Flashpoint Shazam has been the need to deal with tons of continuity and a huge cast of characters, much of which predates the New 52. The New Champion of Shazam #1 sidesteps that problem with deft scripting and self-deprecating narration by Mary, which combined with Shaner’s art finally feels like the clean start that the mythos needs, rounding out a well-deserved 4 out of 5 stars overall. I’m not sure how long Mary will be the new champion, but I’m glad I gave this book a chance and I hope you will, too.

THE NEW CHAMPION OF SHAZAM #1

Mary Bromfield starts a funny, challenging new chapter in her lives, and both Mary and Shazam look amazing. Highly recommended