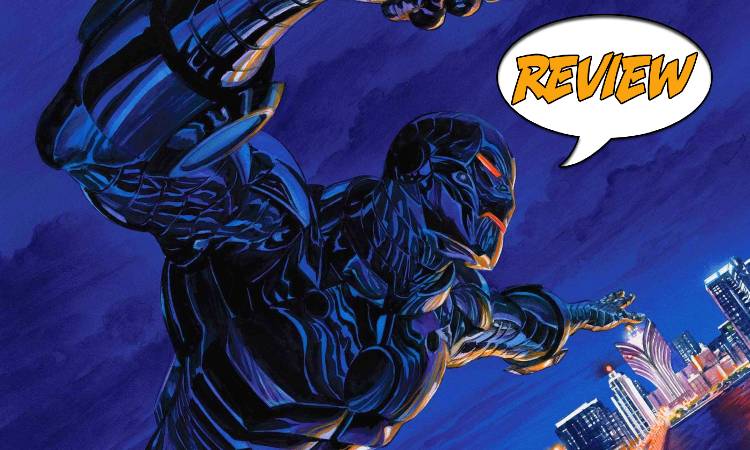 One of Tony Stark’s old friends has been murdered, and it’s up to Iron Man to unravel the truth. Time to go STEALTH. Your Major Spoilers review of Iron Man #22 from Marvel Comics awaits!

Previously in Iron Man: Iron Man flies overseas to Asia and headlong into a cloak of conspiracy, hell-bent on tracking down the rings of his most fearsome adversary, desperate to stop them from falling into the wrong hands. But at what cost? What is Tony Stark willing to sacrifice in order to stop the Mandarin’s power returning, wielded by the hands of a new and possibly unsuspecting acolyte? Iron Man is about to go hard. He’s about to buddy up with criminals.

And he’s about to go… stealth.

WHAT IS THE SECRET OF SOURCE CONTROL?

Iron Man and War Machine begin the issue in an active crime scene, investigating the murder of Vic Martinelli, once their confidante and head of Stark’s security. During the ensuing years, Vic had fallen back into black ops work, but when he called Stark and Rhodey for help, neither of them were available. Returning to their new base of operations, the armored duo rendezvous with the villain formerly known as Force, who is helping them in the search for the mysterious Source Control, the new go-to arms dealers for the most incredible technology available. Analysis of the crime scene shows a particular alloy structure that leads them to the Titanium Man, but before they can pursue him, the giant Soviet arrives to attack. During the battle, Titanium Man attacks with a lethal nerve agent, Compound 13, leaving Iron Man in a coma at the worst possible time.

TECHNOLOGY WITH NO MORAL COMPASS

Cantwell’s use of continuity and supporting characters has been one of the highlights of his run, and this issue continues that, using actual cast member Vic Martinelli rather than a continuity implant character and bringing back the nerve gas that killed Captain Marvel for the combat sequence. I was a bit confused by the reveal at the end, which didn’t quite feel like it came together for me. Part of that came from War Machine’s narration (revealed to be a message sent to Captain America after Iron Man’s injuries) and part of it came from the still-vague nature of the Source Control threat. The Mandarin’s rings are quickly swept aside for Titanium Man who is swept aside for Tony’s injuries, making me wish for more context. Unzueta’s art is good for the armored battle sequences, but the appearance of Patsy Walker and Captain America in Stark’s oddly empty hospital room felt very stiff and awkward to me.

All in all, Iron Man #22 comes together as a better-than-average issue that has a few pacing and clarity issues, but ends with a big surprise, earning 3 out of 5 stars overall. There’s a lot to like here (although Jim and Tony being openly mean to Force bugs me) and the build of an overwhelmingly dangerous new threat continues apace, and Cantwell remembers that The Mandarin’s rings are actually alien devices built by Fin Fang Foom’s giant dragon race, so I can’t be too mad.

Cantwell's Iron Man looks back to the days of Layton and Michelinie, but for all the good stuff, it feels a little bit out-of-sync, and the road to the last page reveal confused me.