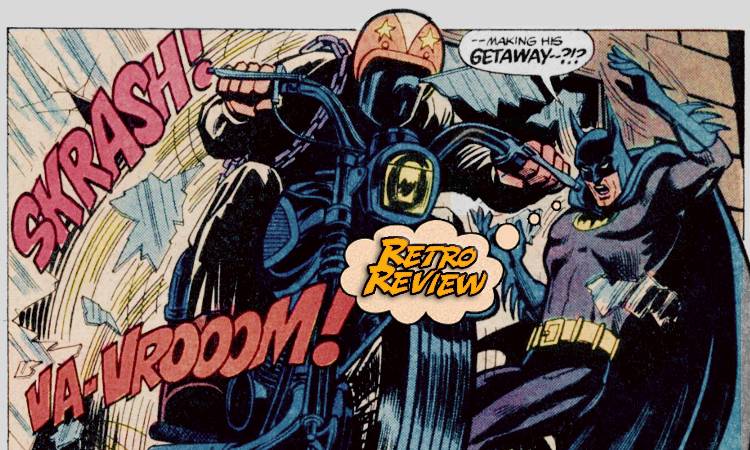 When it comes to the history of comics, some concepts and characters have been around forever. Others are newer than you think, including a certain serious house on serious earth. Your Major Spoilers Retro Review of Batman #326 awaits!

Previously in Batman: Nearly any comics fan (especially those who know the Major Spoilers Hotline number) can tell you that Batman debuted in 1939. Commissioner Gordon was there in the very first appearance, while Catwoman, The Joker, The Penguin, and many of the usual suspects followed in quick succession. Robin came along in 1940, while Wayne Manor’s faithful Butler Alfred debuted in 1943. Of course, his familiar “thin British man with David Niven mustache” design arrived nearly a year later, while the Pennyworth surname didn’t show up until 1969! And if I were to ask you about the year we saw the debut of Arkham Asylum, you might be tempted to say the early ’40s or perhaps during the New Look Batman revamps of the mid-sixties. This 42-year-old comic opens with a particularly important reminder about the nature of serialized superhero tales: There is nothing new under the sun. Much as we have seen in recent years, 1980 finds Bruce Wayne and Selina Kyle are having relationship issues, made worse by the interference of their costumed lives in their romance. After a series of crimes by Catman cast suspicion on her retirement, Selina has had enough. She refuses to stay with a man who doesn’t trust her, getting on a plane for parts unknown and leaving The Batman to curse his double life. I find it strange that, while Bruce Wayne looks older than modern depictions under the pen of Novick and McLaughlin, but Alfred manages to seem quite a bit younger here, and his chauffeur’s uniform also feels a bit weird. Aside from those (and a few other) changes that come from the disco era, the art is perfectly fine, neither flashy nor fussy, and certainly not the Jim Aparo work that we see on the cover. As Bruce Wayne stews over his breakup, he takes to the streets of Gotham in the hopes of finding a crime to bust. Asked and answered, Batman, but I’m afraid you’re not going to like what you get! Instead of Penguin’s umbrella or The Riddler’s obsessions, he is met by an angry jewel thief on a powerful motorcycle, and I have to say, I enjoy the fact that the battle is a difficult one. You don’t always see Batman have trouble with minor villains anymore, but seeing him have to think his way around a bad guy on 400 CCs of steel and chrome is refreshing. Basic physics provides the answer, but the biker cold cocks him with his helmet and gets away, leaving the Batman to puzzle out why the man’s face seemed so familiar! AND there it is! Yes, folks, this issue’s Big First is Arkham Asylum, the official dumping ground for Batman’s various villains, and that panel is the FIRST reference to Arkham Asylum!

Well, sort of. The actual facility, named at the time for its location in Arkham, New England, debuted in 1974, when Two-Face was sent there after an attempt to bomb the city. The city’s name is an overt reference to the works of H.P. Lovecraft, which implies that it may be in Massachusetts, while at this point, Gotham City is semi-canonically located in New Jersey, which means that a trip to the Asylum is somewhat  longer than the stories would imply. In addition, there are references to a mental hospital/sanitarium in or near Gotham as early as Batman #1, which means that this issue is NOT the first asylum, nor the first Arkham. It’s just the first Arkham Asylum, and that’s why the song is called Alice’s Restaurant.

Regardless of all that, Batman’s realization that he sent the criminal, one “Mad Dog” Markham there makes him want to check it out, only for the administrating doctor to insist everything is fine.

Everything is not fine. As poor Shank Taylor finds out, something is very wrong at Arkham Asylum, but that’s to be expected when the new director is… Professor Milo! This sets up a clash between Batman and Milo, returning from a six-year absence from comics, continuing a streak of Bronze Age returns, including the likes of Deadshot, Mr. Freeze, and even Two-Face himself. Regardless, Batman #326 is (in the strictest sense) the first appearance of Arkham Asylum, featuring a Wein script that is just fine and art that is the very definition of “on-model,” earning 3 out of 5 stars overall.

In case you’re wondering, the idea of a Doctor Arkham for whom the asylum is named first appears in 1989, thanks to a young Grant Morrison. That was Dr. Amadeus Arkham, who eventually succumbed to mental illness and died in his own facility. As with so many comic book debuts, this “first appearance” comes with a few caveats and doesn’t really amount to much, but it’s at least a fun factoid to bust out next time you and your Batman-loving friends are playing that much-beloved nerd-game, “Did You Know?”

Wein's Batman isn't ground-breaking here, Irv and Frank keep it retro and the story is all setup, but it's a pretty okay issue overall.

Also, having a character called Markham locked up in Arkham feels like Len Wein doing a little beat poetry..