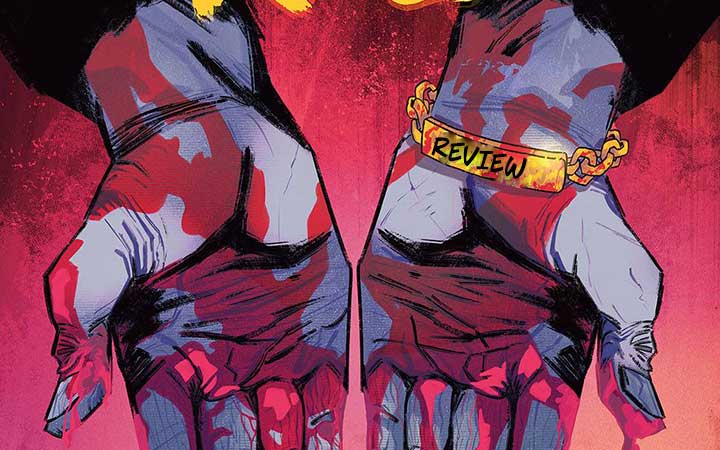 Jay has been brought to an island of elderly women, and on top of that, she can’t be sure if she’s a guest or hostage.  Your Major Spoilers review of Golden Rage #1, awaits!

Previously in Golden Rage:  This is the first issue of a brand-new five-issue miniseries where Battle Royale meets The Golden Girls.

Golden Rage #1 opens up in the middle of an attack, seemingly targeting elderly women.  In the midst of the fighting, Rosie finds Jay and offers her a bath if she comes with her.  Jay wakes up in a house on an island that’s inhabited by three others.  They introduce themselves and explain to her that she can’t leave. Not much is revealed before they decide to all go and take a bath in a natural spring. Afterward, feeling like she’s trapped, Jay attacks one of the residents before being talked down.  The resolution is short-lived though when the house’s alarms go off signaling intruders.

A LOT OF TALKING, NOT MUCH SAID

For a comic book that is almost entirely people talking, Golden Rage #1 reveals very little about the universe it exists in, to a frustrating extent.  How it manages to do this is by playing the pronoun game, everything is referred to as “ Them or They”.  A few names and details slip through, but not enough to create any sort of intrigue.  Instead, it feels like everyone is trying to go out of their way to be as ambiguous as possible.  There are some bits that are hinted at here which suggest that the major conflict has to do with the ability to give birth,  which in itself makes for an interesting topic to base a comic off of.  It’s just unfortunate that in this issue they spend too much time dancing around specifics.  The characters themselves are fun, Rosie the muscular leader who speaks in broken English, Lottie the sweet but somewhat absent-minded one, and Caroline the foul-mouthed curmudgeon.  All of them have very distinct voices and their interactions are enjoyable, they just go nowhere.

While all of the art in Golden Rage #1 is well done, it’s the character work that stands out the most.  The characters have realistic bodies and there’s little done to try and obscure the fact that most of these characters are elderly.  But, there also isn’t any attempt made to exaggerate their age either.  They all look like people who naturally came into their looks via the lives they lived.

Golden Rage #1 hints at a world that is facing some major societal issues regarding age and gender, but is too ambiguous in the way that it addresses these things which makes it hard to be excited about future issues.  Great artwork though makes this issue at least deserving of a look.  3.5 out of 5 stars.

Golden Rage #1 is a dialog heavy book, but fails to utilize all the talking to establish anything beyond what is happening in that exact moment. It is refreshing though to see realistic character bodies and voices.