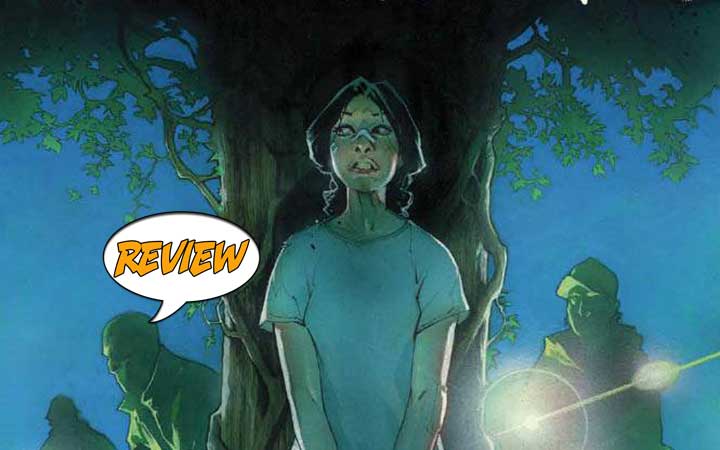 Barret and his disciples want to make their sacrifice for Regan instead of Vanessa. But when she rejects them, who will take her place? Find out in Basilisk #10 from BOOM! Studios.

Previously in Basilisk: Vanessa awakens and wonders where she is, only to realize that she is back home at the compound where she grew up. Regan brings Hannah to the hospital. Waiting outside, Regan hears Vanessa in her head. She goes into the hospital to watch over Hannah and sees the picture of Hannah’s family. She recalls that when she first got her powers, she did not understand them and she lashed out, but she has not remembered any of the specifics. Now she does. She realizes that she killed Hannah’s family. Hannah hears her admit this, and the only reason she does not kill Regan is that she is not strong enough. She orders Regan to stay out of her sight.

THREE WOMEN AND THEIR DESTINIES

Basilisk #10 opens with a strange scene, or perhaps two sets of interrelated images. Sheep in a barn with IV’s running to them. A man carrying a bundle wrapped in cloth. A baby being cut free. It made me think of underground cloning, so maybe that is what is going on at the compound.

Vanessa continues to stare at the path that runs between the obelisks. A man observes this, and says it is because she knows she has been here before. She remembers the path, but not what she found along it. She looks at the people of the compound and asks why they are all here? They explain that they are disciples of the Chimera. It has been bound, and they are meant to set it free.

In the middle of the night Hannah awakens. She knows she is in a hospital. It feels familiar, and at the same time it does not. She writes her thoughts down in a journal. A nurse stops to check on her, to ask about her family.

Outside, Barret and his disciples approach Regan and he asks her to see their offerings, their sacrifice to the Chimera. She is appalled. She does not want their offerings. They move past her, into the hospital, and start killing people. Regan orders Barret to stop them. He insists he cannot and urges her to let it happen and them come with him.

Hannah hears the screams. She looks out the window and sees Barret below. She is not yet fully healed, but she knows she must go. She urges the nurse to stay in the room and hide.

Vanessa moves around the compound. She sees the schoolroom and remembers it. She also starts to remember her early teachings about the Chimera. The Chimera is waiting for her to fulfill her destiny. A woman reminds her that it is not her destiny, it is that of the Chimera. She is only a vessel.

In the hospital, Hannah fights for her life. Clad in a hospital gown, she attacks a man, takes his shotgun, and shoots another. Her way goes forward, and she leaves everything else behind. When she reaches the lobby, she finds bodies of the disciples and realizes Regan was there. She calls out, warning her to stay away. Barret steps out. She points out that his disciples, his sacrifice, are all dead. Regan can hear her in her head. But Barret now feels that Hannah made the offering, not to the Chimera, but to vengeance. And he tells her he can take her to Vanessa.

The art of Basilisk #10 is creepy and chilling. Juxtaposing Vanessa’s and Hannah’s stories give the book a particularly strange feeling. Hannah may be wreaking vengeance against the cult of the Chimera, but it also feels like it is drawing her in. The scenes with Vanessa at the compound build on the details that we saw last time. We see familiar faces as newer, younger versions of people who have lost their lives. It seems quiet and peaceful as they see how much Vanessa remembers – and see whether she knows her place. The calm is unnerving.

And then there are Barret and his disciples. While Barret remains calm like a rock amidst a raging torrent, his disciples are fanatical and crude. With guns and blades, they move through the hospital deliberately taking lives as they go. Is Hannah any better than they are, we wonder. But we also realize that her world has fallen apart. She realizes more than ever that, vengeance or not, her family is not coming back.

Basilisk #10 is well-crafted and disquieting. It feels as though everyone keeps slipping further into the darker side of their souls all for the sake of the Chimera whom no one fully understands.

Who is destined to become the new vessel for the Chimera?