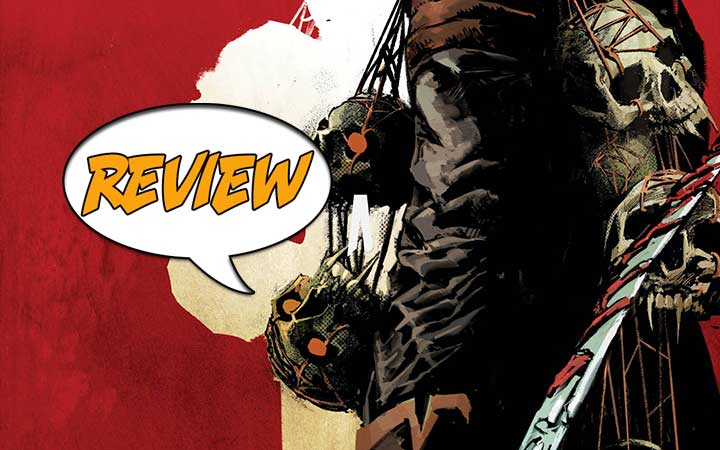 Toussaint and his army fight the Dark Realm. The Vampyres are mere foot soldiers for the Eterna. In the blood bath that is their battle, are there truly any winners? Find out in Killadelphia #24 from Image Comics!

Previously in Killadelphia: Adams is disillusioned. He had thought he was the man with the plan. Then Aelio admits that the Eterna have been preparing for the upcoming war for hundreds of years. General Toussaint and his army ride north slaying Vampyres along the way. Anansi appears and warns him that he is heading into a war against Corson, the master demon. Toussaint is not dissuaded. Washington brings John and Abigail Adams face to face. If they are to work together, they must be able to reach a compromise.

Toussaint rides into the city as Killadelphia #24 opens. There are police and military on the road. They must be aware that supernatural beings exist. Toussaint and his army glide through as though they were fog. When they get into the city, Vampyres wait for them. They attack, and Toussaint muses on how these foot soldiers are not aware of the larger battle they support. The Angels brought Toussaint back to fight as a mercenary against the Dark Realm, but he still feels a connection with humankind.

The scene shifts to SeeSaw. They all want immortality, he realizes. But the price for him was to become a monster. He thinks back to his father. He was a good man, a mailman, just trying to life his life. Until one day when a gang attacked him. He bought a gun. He drew it one day. He was shot by the police.

The slaughter on the streets continues, watched from above by Sangster and the Adamses. George Washington arrives wearing the uniform he wore at the Battle of Trenton. On another rooftop, the Lycans and Tituba watch. This is war, and they need to throw in.

SeeSaw’s father died. This is an event that changed his life forever. Up until then, he knew nothing about death. This is the first time he has seen his mother terrified. But the person who made the difference for him all those years ago was his grandmother. She was there to hold his hand and to teach him the lesson that no matter how bad things get, you have to stand up to it.

THE CALM AND THE STORM

The art of Killadelphia #24 ranges from the chaos of battle to some introspective moments, and it does so with smooth grace. General Toussaint’s battle immediately sets the scene. In a few angular panels, we get a sense of a horde of Vampyres waiting for him. Toussaint and his horse take center stage. His horse wears a cross on its face. Toussaint’s sword cuts through the foe with no mercy. It is a bloody fight with limbs hacked off and guts falling out. It is ironic because all the while, Toussaint sees himself as a conservator of life.

The biggest contrast in the art comes in with SeeSaw’s memories. His father died when SeeSaw was just a kid, so we see the images he remembers as though they were drawn by a child. They are brighter than anything else we have seen before in this book. His memories are the color of summer and of hope, until things turn dark. The gang who attacks his father are depicted with zigzag monster teeth, the way a child might draw them. There is a terrific balance between presenting the events baldly and honestly so we as readers clearly understand what happened and showing them through the filter of a child’s eye, so we can also see how incomprehensible it felt at the time.

BOTTOM LINE: THE SOUL OF THE WORLD IS ON THE LINE

The battle in Killadelphia #24 has become even larger than it was before. At the same time, we see it from viewpoints that are personal and almost intimate. We see humanity as both ephemeral and eternal.

The battle for Philadelphia becomes the battle against the Dark Realm!