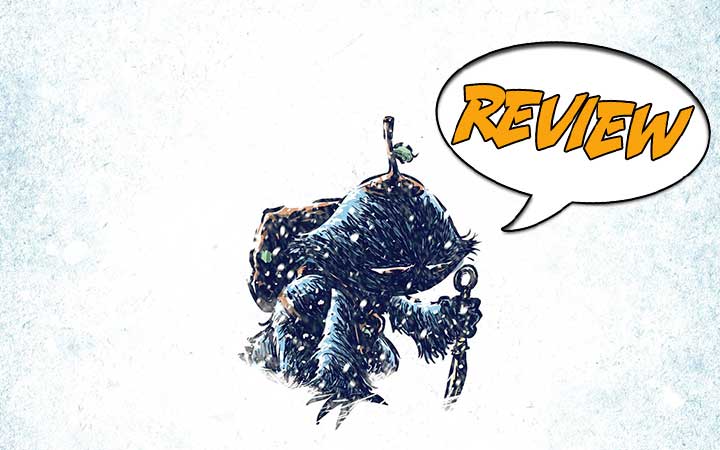 Twig’s quest becomes a matter of making difficult choices without much information. He is persistent and is a good friend. Will his choices start to pay off? Find out in Twig #4 from Image Comics!

Previously in Twig: Young Twig has a nightmare about the end – an attack on a woodland castle, and a large, dark creature with glowing red eyes and wearing a crown. He has been having a lot of nightmares and he knows he must hurry to find the things he needs. As they travel, he gets caught in a hunter’s trap. The hunter knows Twig is a Placeling, and if he does not finish his journey, it will be the end of all things. However, he is also worth a lot of money. Splat causes a distraction, and they escape. Twig needs to obtain the heart of a Horned Beast. When he reaches their territory, he finds heaps of abandoned skeletons and one, lone Horned Beast.

Twig #4 opens with Twig, knife drawn, confronting the young and gentle Horned Beast. Twig pleads with it to let him kill it. The Beast asks why. Twig explains that the Beast has done nothing wrong, but in order to mend the item he broke and to save the world, he needs the Beast’s heart. The Beast asks if it will help to save everyone, and then asks if it will hurt. He then agrees.

But as it turns out, Twig does not have it in him to kill an innocent Beast. They talk later over a meal. The Beast does not even have a name. It is the last of its kind, and its family were killed before it ever got a name. But now it is curious and asks for Twig’s and Splat’s names.

After eating Twig falls asleep and has a different nightmare about the end. The setting and the creatures are different, but the dark creature in the crown is the same. Twig awakens, sure that he is going to fail. The Beast and Splat are outside waiting for him. Splat announces the Beast’s new name – Lobee. Lobee is packed and saddled and has agreed to go along on their quest.

Twig next needs to obtain a song from someone called the Boxed Loxs. Along the way there, Lobee talks about what happened to the Horned Beasts. They were poached for their horns. Since their hearts are located in their horns, they died. Splat interrupts the serious conversation to warn them of an imminent attack by a giant Mud Gug. Then Lobee asks Twig the question we have all been pondering – how does a Placeling end up needing to save the world?

Twig explains that a Placeling has to put everything in its right place before the world can be saved. His father was an expert, but he died before taking on an apprentice. Twig is his replacement because he knows more than anyone else about being a Placeling even though it is clear he knows very little.

They find the Boxed Loxs, who is indeed locked inside a metal box with a slot opening kind of like a mailbox and is humming to itself. Twig asks it for a song, and it asks what he will offer in return. Twig dumps out his bag. Of all his small items, the Loxs wants the key that he has. Twig is unsure because the Loxs could be dangerous. He cannot trust that releasing it would be safe. It agrees with him but points out that only Twig can decide whether it is worth taking the risk. Twig does set it free, and it whispers a song to him in return.

Twig must find one last thing which is on the moon. He asks Splat and Lobee to stay behind. He does not feel that he can ask them to come with him on a journey that he knows is doomed to fail.

Twig #4 still feels alien. It is not clear why the world keeps being on the brink of ending or how a Placeling’s job could possibly help prevent this. Many creatures have been notably placid about the end of the world coming, and even Lobee does not seem to mind giving up his life. But everything we see in this world reminds us that it is not our own. The Horned Beast looks like a cross between a rhino and a hippo, but it is pink and childlike. When interrupted mid-meal, it has food around its mouth. Its eyes are round, clear, and trusting. Twig seems so determined to take its heart that I wondered if he really was going to kill it.

I love the Boxed Loxs. I already mentioned the incongruous box it is inside. That box is further hidden in a gnarled tangle of plant roots. It looks as though it has been there so long that some of the roots have taken hold of the box and started growing around it. All we see of the creature at first is what we can see through the narrow slot, two glowing eyes and a mouth full of gleaming teeth. We cannot quite imagine what it would look like, and its reveal is explosively weird.

The story in Twig #4 continues to grow on you. Even though the trappings are strange and wonderful, we can still make out the underlying bones of a Hero’s Journey. Twig thinks he is destined to fail, but he steadfastly continues. I wonder if he is succeeding in a way we do not yet expect.

Twig’s quest is not going as planned, but he stubbornly persists.