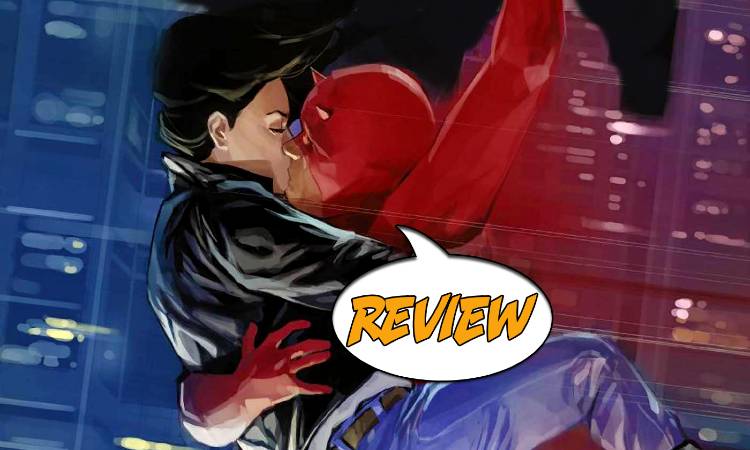 Jessica Jones is facing the legacy of The Purple Man… or is she? To find out, she’ll need the help of a few friends, and also herself? Your Major Spoilers review of The Variants #2 from Marvel Comics awaits!

Previously in The Variants: Jessica Jones is experiencing terrifying blackouts and leaving chaos and pain in her wake. But will the latest effects of her missing time leave her on the wrong side of the law AND her own family? Meanwhile, the mysterious Variants arrive, and Jessica fears for her own sanity!

As the last issue ended, the former Jewel had burst into her daughter’s room to find not one intruder, but TWO. And both of them have her face. The Variants #2 proper starts with a flashback, though, of a conversation she had with Tigra about Hell’s Kitchen and how if the bad guys ever actually FOUND her neighborhood, they’d likely burn it to the ground. In the present, Jessica manages to catch one of her doppelgangers with a sucker punch, but ends up in a standoff with the version of her carrying a familiar red-white-and-blue shield. She informs the Captain that they’re currently in the most dangerous place in the world, only to hear her variant scoff that she’s not afraid of Hell’s Kitchen. “No,” Jessica replies, “I meant the small patch of carpet between my husband and my daughter.” The arrival of Luke Cage heralds the unceremonious end of the fight, after which she begs him to take their daughter and hide until she’s sure about whether or not Killgrave still has some sort of hold on her. To that end, she calls in another old friend to help her through, only to have another unexpected guest arrive.

THE MOST DANGEROUS REAL ESTATE IN THE WORLD

The difficulty of any married couple in a comic book setting is the worry that happily married characters are dramatically inert, but this issue manages to overcome that by having Jessica sending Luke away because she doesn’t trust HERSELF. The moment where Cage arrives in Danielle’s room to crack skulls is truly satisfying, but also makes it impossible for the first two variants to explain themselves, what with being unconscious. That prolongs the story in a good way, though, allowing She-Hulk to come into play (wearing her FF uniform, a moment that I love) and ending the issue with the big reveal. Noto’s art is incredible throughout the issue, an especially difficult proposition when four of the seven major characters all have the same face. The page of Purple Man’s hypnotic message is absolutely chilling, while Jess and She-Hulk’s comedic interactions are charming as heck. The fact that it involved Jessica trying as hard as she can to punch Jennifer out, worried that she’ll somehow overpower her friend under the control of her old enemy makes it even more wonderfully bizarre.

In short, The Variants #2 is full of impressive dialogue and wonderful character bits from Tigra, She-Hulk, the Cage family, and more, with stunning art and a premise that still has mysteries to unfold, putting together a top-flight second chapter that earns 4.5 out of 5 stars overall. If you have ever been a fan of Jessica Jones in any incarnation, you owe it to yourself to give this one a shot.

This issue still doesn't explain the whole of what's going on but that's okay, because the plot, characters and art are all strong enough that I want this mystery to last.