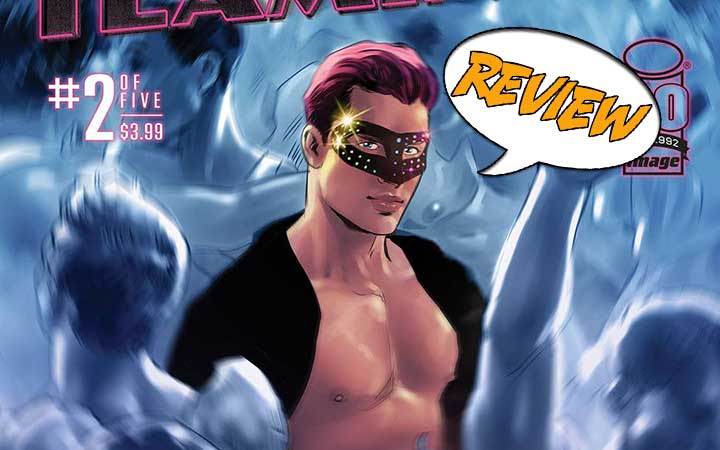 Sins of the Black Flamingo #2 Review

When Harlow finds an imprisoned angel, he breaks him out. Now Thorndike Scar is gunning for him. Can Harlow outsmart Scar and his shooters? Find out in Sins of the Black Flamingo #2 from Image Comics!

SINS OF THE BLACK FLAMINGO #2

Previously in Sins of the Black Flamingo: Sebastian Harlow is a modern gentleman thief whose preferred work is stealing occult artifacts from idiots and returning them to where they belong. From the basement of a museum that seems to specialize in primarily Confederate artifacts he steals an inscribed clay tablet and then nabs a document and a sketch. The tablet holds the soul of a queer Jewish mystic. When placed in its proper clay body, a golem comes to life. Harlow takes the documents to his friend Ofelia, who recognizes that they describe a collar that could be used to hold a demon or spirit. That collar belongs to the wealthy Thorndike Scar. Harlow attends Scar’s party and searches for the collar. But when he finds it, it is in use binding an angel!

Sins of the Black Flamingo #2 opens with Harlow racing away from Scar’s party in a speedboat with the unconscious angel. All the while Scar issues threats to him over the boat’s radio. Harlow draws close to shore, carries the angel out, and blows up the boat. Harlow does not believe in God or heaven or angels, but what else would you call a person with wings? And when Harlow looks at him, he feels different. All his pain goes away. The angel regains consciousness enough to warn him that Scar will kill him. But Harlow decides to protect him.

He takes him to a Circuit Party in South Beach. Harlow hopes there will be someone there who could help, and it is a place where they can blend in. The people there can’t all be exes he ghosted, friends he stole from, etc. Then, of all people, he runs into Abel, the golem. One thing led to another after he was awakened, and here he is. But he is having problems with his memories.

Harlow does not feel like he can deal with two supernatural problems at once. He finds a place for the angel and a couple of Scar’s men grab him and pull a gun on him. Fortunately, Abel is close, and he knocks out the thugs. Harlow asks Abel to take the angel the synagogue. A place of worship should mask his presence.

Time passes. As the Black Flamingo, Harlow calls Scar and arranges a meeting at Wild Island, an abandoned attraction that looks like a wild animal park. We learn he has the ability to see the world as it really is, and as it really was. This was a place where witches used to gather. Harlow contacts their spirits and asks for sanctuary. They allow him passage. This was an interesting twist, and I like the way it brings the occult world to yet more life.

A group of Scar’s men comes ashore to look for the Black Flamingo. An abandoned zoo at night is a creepy place. These men have memories of it and there is the passing dreadful thought of whether any of the animals are still alive. An alligator attacks and pulls one of them into the water as the other two race for land. Next, a swarm of wild parrots startles them and knocks another man off an elevated walkway. The last man finds Harlow, reclined and looking fabulous. But as he raises his gun, a venomous snake attacks him.

Thinking that all of them were taken care of, Harlow starts to leave. He pauses for a moment to admire the flamingos. His phone buzzes, alerting him that the angel is safe. A bullet strikes his phone and his hand. Thorndike Scar also came to the island.

AN AMBUSH AFTER DARK

The art of The Sins of the Black Flamingo #2 is wonderful. I have to say, there are a lot of very fine-looking young men in this book. The Circuit Party is very gay, but I love how it manages to be a place where the angel can blend in despite his wings. It is a fun way to bring Abel back into the story as well. This is also a scene where the lettering is used to good, but subtle, effect. The angel has a different font that suggests being and older style. Abel also has his own font which looks slightly italicized. We can tell their speech patterns are not quite like everyone else’s, but they are not so different as to stand out.

I really love the art when we get to Wild Island. From the Black Flamingo’s chosen costume of the night, which involves a “Daddy’s Lil Monster” crop top, to the cheerful creepiness of the abandoned zoo, to the Black and Indigenous spirits that Harlow speaks with, it is all wonderful. It sets up the nighttime animal attacks. We do not see gore and body parts, but we do see the alligator attack suddenly and then disappear under the water with its prey. The other animal attacks are a similar mix of horror and goofiness.

The Sins of the Black Flamingo #2 continues strongly. I love the color and the drama in this world, as well as the way the occult is used. We start to see the serious Harlow who lives beneath the surface of the fabulous Harlow and the contrast makes the main character compelling.

Sins of the Black Flamingo #2

Harlow does not believe in angels, but he has rescued one from the clutches of Thorndike Scar!