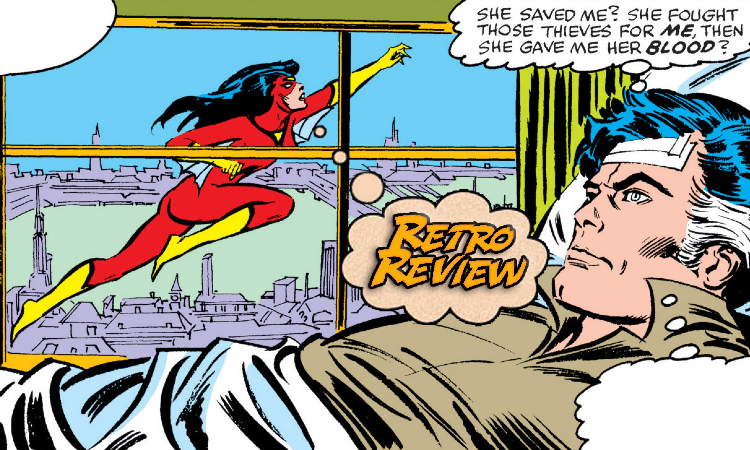 Who is the Spider-Woman? How did she come to be? And what do cartoons have to do with any of it? Your Major Spoilers Retro Review of Spider-Woman #1 awaits! Previously in Spider-Woman: Back in the Golden Age, swiping stories, costumes, and even entire images were commonplace. But by the 1970s, matters of copyright were a different beast, meaning that when Marvel Comics (then owned by Cadence Industries, a chemical conglomerate) caught wind of a new cartoon project, they were alarmed. Produced by Filmation, often known as the quick-and-dirty animation house of the era, the Spider-Woman cartoon would have followed a woman named Kelly Webster, who received powers from an alien ring, allowing her to channel the abilities of the insect world. Worried that a Spider-Woman would undercut Spider-Man as “intellectual property,” Marvel fast-walked an issue of Marvel Spotlight to print featuring their own Spider-Woman, securing the copyright to the name. That story introduced her as an agent of Hydra, but halfway through, traumatized her with the reveal that The High Evolutionary had evolved her into human form from that of a lowly spider! After a four-issue guest stint in Marvel Two-In-One (during which The Thing’s sweetheart, Alicia, was turned into a human/spider hybrid creature), Arachne the Spider-Woman was left in the company of Modred. So, how did she get HERE? Though starving, Spider-Woman refuses to become a thief, even of a can of tomatoes. Sadly, her angry rejection gains her some attention from the night guard, and even fleeing doesn’t help her, as an officer of Scotland Yard catches her and snags her mask. She escapes while he obsesses over her beauty, returning to the London flat she has made her temporary home. Spider-Woman escapes from hunger by falling into bed and dreaming of the recent revelations about her life. Thanks to Modred’s magicks (with a k), Spider-Woman finally learned the truth of her origins. This sequence is really the first in the issue to show the weaknesses in the Infantino/DeZuniga art, as preschool-age Jessica Drew is really horrifying to look at. Infantino’s work in the 1980s is one of the more polarizing art styles I can remember. He was the regular penciler on The Flash when I started reading the book in the early 1980s, and I still remember complaints about his loose and indistinct style. The first part of this issue mostly avoided such problems, but the flashbacks are less successful for me as a reader. The story, however, is kind of a fascinating bit of retcon, as we find scientist John Drew and his best friend Herbert working on their genetic acceleration experiments. Unfortunately, their choice of lab location leaves a bit to be desired, as Wundagore Mountain is also a huge trove of radioactive uranium. To solve his daughter’s radiation poisoning, Drew injects her with his insect serums, but little Jessica is left in a comatose state. Herbert offers to use his genetic accelerator to quicken the serum’s results, but Drew’s wife protests. Apparently already a frail woman, Meriem Drew dies from the sheer stress, causing John to flee Wundagore, leaving Jessica in the hands of good ol’ Herbert.

That’s Herbert Wyndham, the High Evolutionary, by the way, who subjects the child to years of such treatments, creating a powerful, spider-powered woman. Since H.E. is a lying liar who lies, he claims to have created “Agent Arachne” himself, accelerating a spider to human form, leading her to Hydra and despair. Thus, we quickly dispose of the evolved-spider premise and sent Spider-Woman out into the world with an entirely new set of neuroses. She also chooses to dye her hair and alter her mask in the hopes of hiding from Scotland Yard’s Jerry (who turns out to be an agent of SHIELD on detached duty), which… I’d have altered the skin-tight crimson leotard first, but he WAS obsessed with her gorgeous face. Of course, she immediately encounters Jerry in action, fighting off criminals with advanced laser rifles. Spider-Woman leaps into action (coincidentally showing off her powers of super-strength, glider wings, venom blasts, and immunity from radiation), but the battle leaves her new friend/love interest badly wounded. I imagine punching out a platoon of Bobbies isn’t going to make her many friends in the British law enforcement community, but Spider-Woman gets Jerry to the hospital in time for him to make a full recovery and obsess about her some more. The lion’s share of this issue is actually devoted to altering Jessica/Arachne’s origin, which is an interesting story unto itself. Due to the rush to get Marvel Spotlight #32 into print, writer Archie Goodwin had cribbed the evolved animal gimmick from Chris Claremont, who had at one point planned to use it as the background for Wolverine! I think my favorite part of Spider-Woman #1 is how much it feels like a first appearance, when in fact it’s mostly fast-paced retcons folded into some well-paced exposition, earning 3.5 out of 5 stars overall, and explaining how Tarzan and The Super 7 led to one of the most beloved of modern Avengers, with a stopover at Wolverine. If nothing else, this issue finishes off Spider-Woman’s perfect original costume by adding the giant cascade of ebony hair* to perfectly balance her look.

*Exactly how she grew the extra two feet of hair between panels is left unexamined, but probably a side-effect of her genetic alterations. I await my No-Prize.

Infantino and DeZuniga are unexpectedly well-paired, while the story pulls off quite a bit of narrative heavy lifting without feeling as forced as it probably should have.