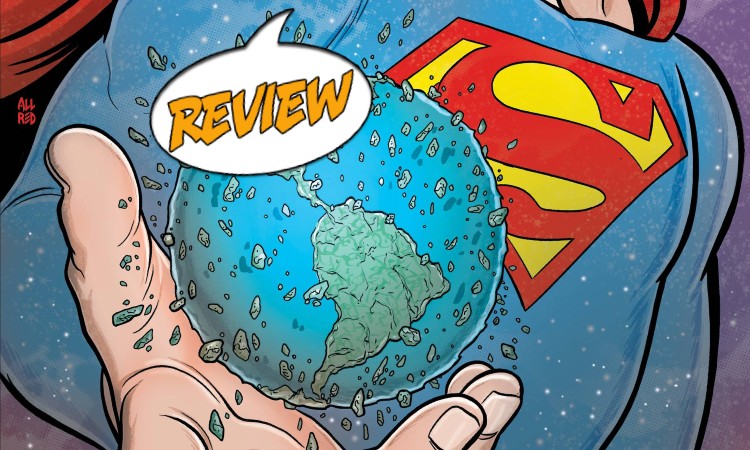 It’s a Silver Age Superman like none you’ve ever seen, leading up to a Crisis… on Infinite Earths. Your Major Spoilers review of Superman: Space Age #1 from DC Comics awaits!

Previously in Superman Space Age: Meet Clark Kent, a young reporter who just learned that the world will soon come to an end and there is nothing he can do to save it. Sounds like a job for his alter ego… Superman! After years of standing idle, the young man from Krypton defies the wishes of his fathers to come out to the world as the first superhero of the Space Age. As each decade passes and each new danger emerges, he wonders if this is the one that will kill him and everyone he loves.

Superman realizes that even good intentions are not without their backlash as the world around him transforms into a place as determined to destroy itself as he is to save it.

Our story begins in 1985, as the Crisis on Infinite Earths envelops the planet. Superman flies to his Fortress of Solitude to spend his last moments with his wife Lois and their son Jonathan. Twenty-odd years earlier, young Clark Kent and his father are working the fields, having their usual father/son discussions, as the would-be Superman wonders why he can’t just get all the work done at super-speed. Jonathan Kent proceeds to tell his son of an incident during WW II, when the elder Kent found out the difference between getting things done quickly and getting them done right. It’s a haunting tale, made even more disturbing by the news broadcast immediately afterward: The President has died in Dallas. With the world on the brink of nuclear destruction, Clark tries to go into action for the first time, only to be shot down by an Air Force pilot before he can enter Russian airspace. Upon crashing into the ocean, he finds a gift left behind by his OTHER father, Jor-El: His Fortress of Solitude. Months pass, and young Clark moves to Metropolis to become a journalist, while in Washington DC, an important government contract is up for bids, with the final decision being a choice between Bruce Wayne… and Lex Luthor.

A TALE OF TWO FATHERS

Though this story was presented as a prequel to the classic Crisis storyline, it’s really more than that, and even more than another Superman origin. By using a real-world timeline and actual events, Russell and Allred manage to give us the most grounded Superman story in years, with the teachings of Pa Kent and Jor-El seen throughout this issue, helping to shape a young man from Kansas into a hero who bridges two worlds. It’s also a story that creates an alternate reality from any seen before, serving as an origin for a young Justice League, with Lex Luthor’s perfidy inadvertently turning Bruce Wayne into a hero, convincing the Amazons to send an envoy to Man’s World and putting a young pilot named Hal Jordan in a place to shoot down Clark Kent and eventually become a Green Lantern. Mike and Laura combine for incredible art and vivid coloring, whether it’s the futuristic Fortress, the Kent family farm, or an underground bunker, everything feels well-designed, perfectly colored, and well-rendered. Mike’s style is subtly different here, pulling away from his normal Kirby-stylings to something that feels more akin to a Gil Kane influence, appropriate for the DC Universe.

Some might balk at the ten-dollar cover price, but Superman: Space Age #1 is practically four comics worth of entertainment, with Russell curbing some of his more cynical tendencies while Allred does some of his best work, for a total package that easily earns 5 out of 5 stars overall. With Dark Crisis (soon to be Dark Crisis on Infinite Earths) underway, this book serves as an interesting counterbalance, showing us a world where Pariah’s message came earlier, but still might have been too late. I can’t wait to read the rest of this tale.

Eighty pages for $9.99, with a complex, entertaining story and stellar Allred art?