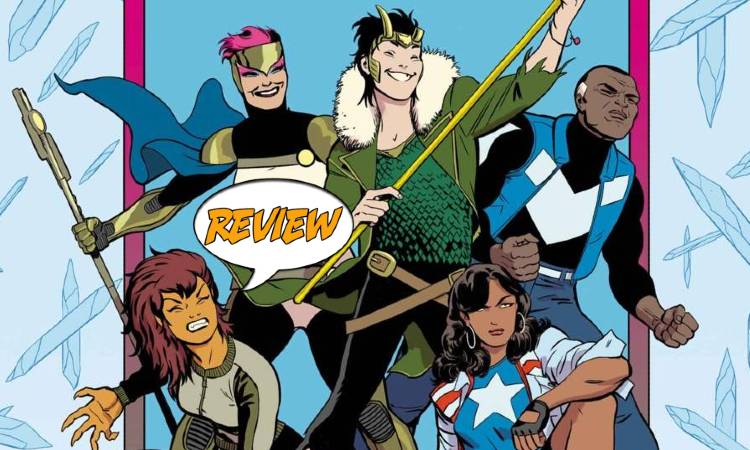 What is the final spell of Stephen Strange and what does it mean for the Defenders? Your Major Spoilers review of Defenders: Beyond #1 from Marvel Comics awaits!

Previously in Defenders: Beyond: The Defenders return with a new leader: Loki, God of Stories! When Doctor Strange sends a dire warning from beyond the grave, Blue Marvel, America Chavez, Taaia (Galactus’ mom!), Tigra, and Loki assemble to defend reality itself!

Plus, you won’t believe who shows up on the final page!

The last team of Defenders has dispersed. Doctor Strange is dead. The Silver Surfer is exploring unknown portions of the universe. The Red Harpy has gone missing. And as for the Masked Raider? His fate is the strangest of all. But reality still needs Defenders, which is how Dr. Adam Brashear, The Blue Marvel finds himself face-to-insubstantial-face with the last spell of Strange: A spell to assemble Defenders. The magic brings him a box containing a strange helm, a Tarot deck, and the Eternity Mask, but he has no interest in answering the call. He does, however, answer his door, where he finds his old friend America Chavez requesting assistance. Before he can shoo her away, the next card bears the visage of Loki, who arrives with Taaia, the Mother of Galactus. Blue Marvel once again attempts to rationally explain to his visitors that he needs to deal with another issue, but Loki turns another card and a mystic portal opens, bringing Tigra The Were-Woman into their midst. Five Defenders, five points of a pentacle…

And then, the spell teleports them all away.

I’m not going to spoiler who shows up on the final page of this issue, but I will tell you that my jaw dropped, and I can’t tell whether or not they’re an antagonist or another Defender, but either way, I’m stunned. This issue starts out at full speed and only picks up momentum, as Ewing brings together concepts he has been playing with for over a decade with a whole new non-team of misfits and heroes, and the use of Blue Marvel as leader is kind of genius. A man of science whose world is halfway magic already, Brashear is as capable as Doctor Strange but not as schooled in the madness, and the presence of the female Loki variant (as seen on TV!) adds the chaos this story needs. Rodriguez’s visuals are just plain amazing once again, with the same visionary madness that we saw in the previous volume of Defenders at play. His Taaia feels like a distilled Kirby drawing, while each of the other players gets lovely touches of personality in their look and body language.

I’ve been an Al Ewing fan for several years now, and a Javier Rodriguez backer since 2019, so Defenders: Beyond #1 hits a perfect sweet spot for me, with art that is evocative and colorful, but still subtle when it needs to be, and a story that makes it clear that the universe has a plan for the Defenders once again, earning 5 out of 5 stars overall. The last collaboration between these creators traveled in time and space, creating literal universes out of the building blocks of Marvel Comics itself, in ways that are clever in-universe and out, so I’m absolutely sold on this miniseries and want all comics fans to give it a chance. You won’t regret it.

A new team of Defenders arises with incredible art and an engaging story. What's not to love:

PS: They aren't joking about that last page shocker.