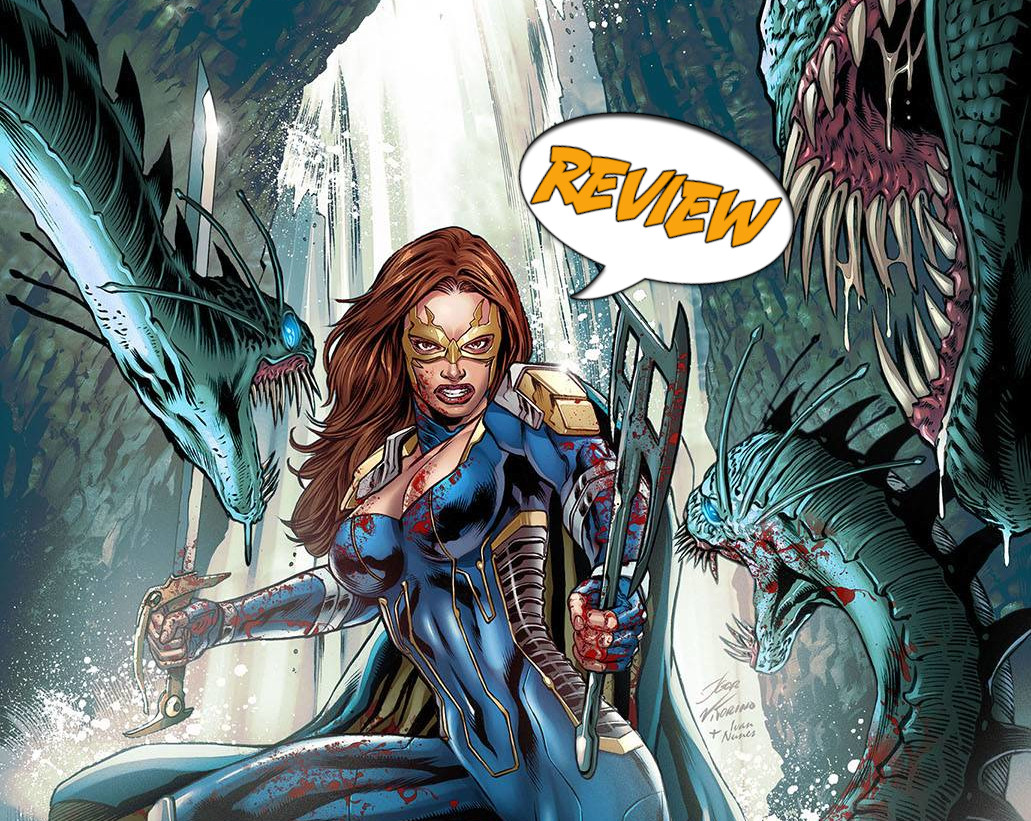 Belle has a shield that will help her save her mother’s soul! But the shield is a target for all sorts of monsters. Find out what happens in Belle: Return of Scylla from Zenescope Entertainment!

Previously in Belle: Belle is looking for the gate of Tartarus to save her mother. Using Cryptid resources, she managed to get a shield that would act as a key to the Underworld. However, being a famous monster hunter means creating an enemy or two.

Belle: Return to Scylla starts with Belle in a submarine in the middle of the Atlantic Ocean when suddenly she is attacked by snake-like sea monsters. Belle is knocked unconscious and finds herself on an island surrounded by these sea creatures. She is saved by a lioness, taken to a castle, and dressed in a toga. Exploring the castle, she finds Cassiphone, who uses magic to try and control her. Belle resists the magic and finds herself fighting a couple of bears.

As Belle searches for an exit, she finds the sea creatures again, led by Scylla. Evading them, she finds Cassiphone with the lion that saved her earlier. Belle destroys a vase, and the lioness turns into the goddess Circe, who is the mother of Cassiphone. Belle is then allowed to leave while the mother “handles” her daughter. Belle takes a boat and heads back to the Cryptid submarine.

I am not very familiar with the Grimm Universe. Many incredible things happen in Grimm comics, but Belle is relatively unknown to me. I don’t really quite understand her motivations. In Belle: Return of Scylla, we meet an old villain and several sorcerers. But both enemies felt a little out of place. Belle didn’t defeat them but somehow managed to avoid direct conflict. With that in mind, I wasn’t sold on the comic. Belle is usually a dynamic monster hunter, so having her not be a monster hunter in this issue felt counterintuitive.

Zenescope has a distinct art style for the Grimm Universe. The comics I have read have had a darker color palette. Belle: Return to Scylla uses a lot of white and didn’t accent enough with darker colors to grab my attention. Even the character design of each human character felt very similar. However, the monster design is always spot on.

Belle: Return to Scylla did not feel finished. It had some interesting plot ideas but did not challenge Belle. In a way, I think this adventure was supposed to remind her about her mom, but it wasn’t clear. Perhaps this is designed just to be a filler till the annual comes out later this year. 2 out of 5 stars for Belle: Return to Scylla.

Belle: Return to Scylla failed to challenge the protagonist, which led to a poor narrative arc.