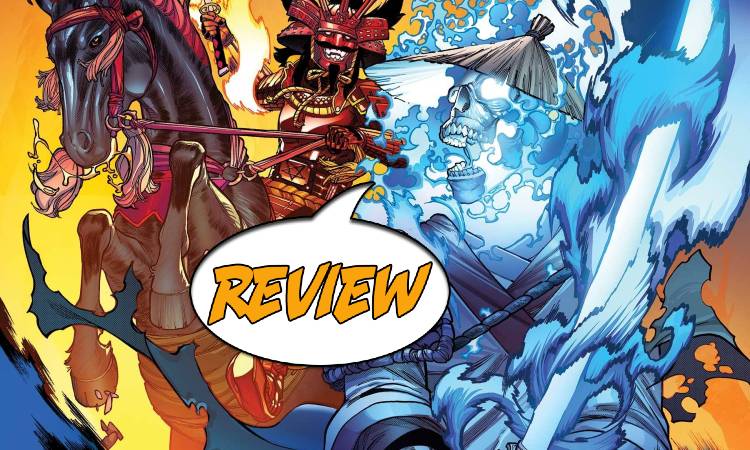 The Mighty Avengers have become unstuck in time. And so, it goes… Your Major Spoilers review of Avengers #58 from Marvel Comics awaits!

Previously in Avengers: Japan, the Edo Period. They say he walks by night, wielding a blade forged by hellfire. And where he wanders, the penance flows, like fountains of blood. He is the fabled Ghost Ronin, the Samurai of Vengeance. And alongside the Avengers, he will make his final stand against the lightning swords of the devil himself.

THE FOOTSTEPS OF THE GHOST RONIN

Avengers #58 opens in the Edo Period, some time in the early 17th century, as a pair of cloaked travelers nervously find themselves followed… by a ghost. Things aren’t what they seem, though, as the travelers are actually Avengers Nighthawk and Captain America, while their pursuer is the legendary Ghost Samurai, Miyamoto Musashi. Most importantly, none of them mean each other harm, as they’re trying to protect one another from Mephisto’s #TimeTravelShenanigans. The Avengers try to protect the samurai from a horde of demon motorcyclists, but the bikers aren’t prepared for Ghost Ronin’s swords, nor are the longboat full of damned Vikings’ souls. Each time the Lord of Lies ups the ante, and each time, the Avengers simply watch the Ronin devastate his attackers. As the issue ends, Ghost Ronin reveals to the heroes that the secret to finding the right place is to “follow the fire.”

Then, Mephisto rides by on a demon horse, taunting them all.

As with the last issue, the heroes aren’t really the focus here, but we do (finally) get some interactions between the new team members here. Echo and Namor hash out a little bit of their old conflict until he apologizes for his actions by… uhh… threatening to murder her if she turns evil. It’s a fun moment for both heroes, as is the interaction between Thor and Valkyrie, full of tension about Mjolnir’s true owner and the temptation that Mephisto dangled before her a couple of issues ago. Garron’s art takes on a new tone here, feeling very different than last issue’s sojourn in World War II. Edo period Japan is beautiful under his pen, but Ghost Ronin is even more disturbing than most Riders, with an empty gaze of tranquil fury. But my favorite parts of the issue are the subtle touches: Nighthawk and Captain America’s fluent Japanese, Thor’s remarking that time travel isn’t a big deal (he’s met himself dozens of times, and he always detests himself), and Starbrand’s discomfort with the skull-headed samurai all combine for an issue that fleshes out our new team of Avengers in satisfying ways.

BOTTOM LINE: I’VE BEEN WAITING FOR THIS

All in all, Avengers #58 once again pulls off the alchemy of lovely art and remarkably creative story to give us an untold tale of Earth-616’s past, making for not only a fun Avengers story, but one of the more off-beat Ghost Rider takes we’ve seen since 1973, earning 4 out of 5 stars overall. Aaron’s run seems to not be for everybody, but if you’re interested in wild stories that manage to extrapolate beyond the boundaries of traditional comics, I recommend you check it out.

I don't know how they've pulled it off, but this creative team has been building this story for nearly five years, and I'm still psyched to read each issue.