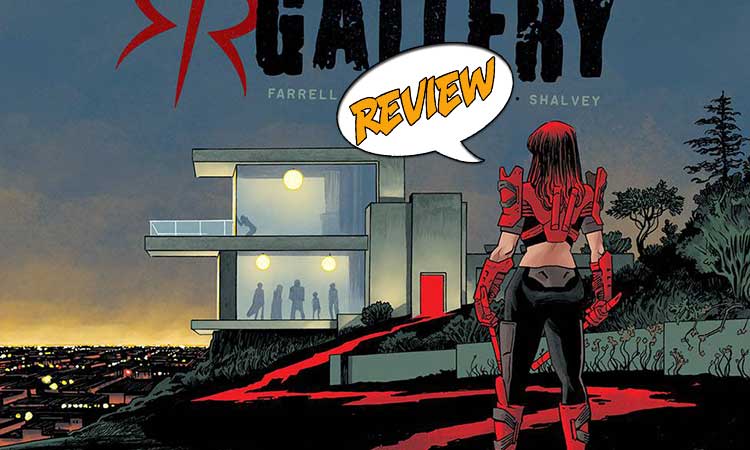 What happens when a group of  fanatics are finally pushed to the brink by the treatment of their favorite thing? Your Major Spoilers review of Rogues Gallery #1, awaits!

Previously in Rogues Gallery: Kyle, Yuri, Skink, Dodge, and Hayley are the world’s biggest fans of Red Rogue, and they absolutely despise what actress Maisie Wade has done to the character in the TV adaptation.

A PLAN IS MADE

Rogues’ Gallery #1 opens up with Red Rogue and her team being led into a trap by Jackdaw and all of their fates left hanging in the balance.  Things then pull away to reveal that these are events from a TV show being watched by a group of comic book fans and they are not happy.  The group bicker back and forth about the quality of the show, but they all are in agreement that the show’s runner Maise Wade is to blame and on top of that, she’s just recently purchased the 1st issue of the groups favorite comic book series. Things then follow one of the members of the group, Kyle, as he goes home.  There he clashes with his father who is strapped for cash.  Later, he rejoins the group and they inform him that they have been making a plan to break into Maisie’s house and steal the comic.  The next day Kyle’s dad tells him he’s getting kicked out.  This pushes Kyle to tell the rest of the group that the plan needs to happen.

Rogues’ Gallery #1 is a blunt depiction of the darkest parts of pop culture fandoms.  The group of friends are depicted as feeling entitled to their favorite comic book series and righteous in their hatred towards those they feel aren’t being faithful to it.  It’s unsettling how true to life the statements made in this issue are to real world discourse that is happening every day on social media.  There is a nice balance here though between not trying to paint the main characters as likable and  showing that some of their motivations go beyond simply enjoying Red Rogue.  Kyle’s character is the most diplomatic of the group, but he’s also facing the most personal drama, which pushes him into trying to be accepted by his friends and willing to make the biggest effort to get the plan off the ground. There is some one-dimensionality on display here with some of the characters though which brings them closer to parody status and makes it easy to see them as simply bad people as opposed to representations of toxic fandom.  As for the plot, it’s paced well as a majority of the issue focuses on the build-up to action, with some clever inclusion of future events that both foreshadow and create a nice cliffhanger.

Rogues’ Gallery #1 doesn’t do too much with its art, nor does it really need to. The characters are all well established with their own look and style, things are clear to read, and the action conveys a sense of motion.  The one interesting thing of note, was the decision to not try and implement any stylistic changes to the scenes taking place in the TV show as opposed to real life.  It’s unclear if this is intentional, but it does help drive home the fact that the characters view the show as something akin to real life.

Rogues’ Gallery #1, doesn’t try to make the reader like the characters in this issue, maybe sympathize slightly, but definitely not root for.  This is a very apparent take on the aspects of pop culture fandom that are steeped in toxicity.  Some of the characters border on caricature territory but for the most part this is a well done commentary. 4 out of 5 stars.

Rogues Gallery #1 is a fine looking book that is full of characters that for many, will feel uncomfortably familiar. A well paced plot also sets up follow up issues well.