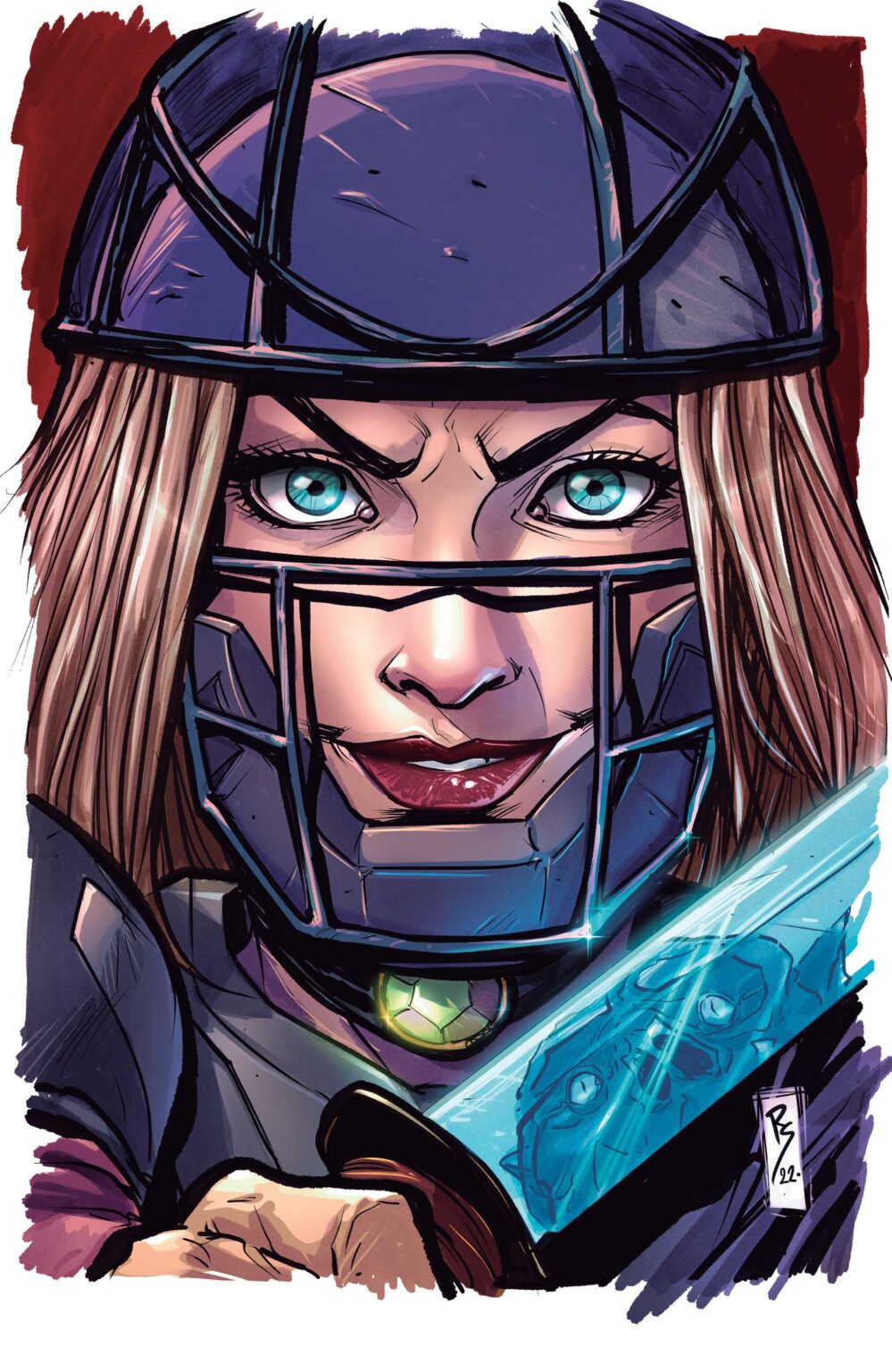 Karen Campbell is a soccer mom who isn’t afraid to wield everyday household objects as a monster-killing weapon. She is a descendant from a long line of women who have been passed down the CURSED AMULET – a shard of glass that grants the bearer power over horrible monsters that can only be seen by children. Writer Pat Shand and artist Rio Burton launch a new fantasy epic! Azza was born into a family that, for generations, served in the Obsidian Guard, a military unit of holy warriors. During Azza’s Coronation, a magical ceremony that would imbue her with a holy glowing power, something went wrong. Instead of the sacred Obsidian tattoos, she became marred with thorned, black markings and was banished by her people. Now, Azza lives in solitude guarding a great evil… but when that evil escapes and begins to spread its wicked power, Azza must make a choice: save the people that expelled her or allow her home town to fall to evil. With an emotional, comedic, and awe-inspiring story of empowerment, Azza the Barbed blends fantasy, adventure, mythology, horror, and action in this unforgettable new series. In this action-packed, debut issue, we are introduced to the madness and heroism that is Captain Suave! A champion beyond measure, Captain Suave’s journey follows a modern-day retelling of Cervantes’s classic, Don Quixote, only this hero is convinced that he is a Golden Age superhero. Ready yourself for an adventure that must be seen to be believed, as Captain Suave and his trusty sidekick, Champ, battle the imaginary forces of evil in Cleveland, Ohio! The elusive creatures of mud and blood known as the dokkaebi live just off of Route 4 in east Texas, in the ancient pine forest known as the Tanglechase. Joon-Ho, a Korean immigrant with a shadowy past, and his estranged grandson Jae-Sun are the only people in the nearby town of Vane who know the true nature of the dokkaebi. Together, they must figure out what’s causing the creatures to turn hostile. Perhaps it has something to do with the interdimensional portal at the heart of the Tanglechase, for it is from here that the past comes knocking, demanding a reckoning from both men. Sci-fi writer Zack Kaplan and artist Arjuna Susini take you on a sci-fi adventure like no other, one that imagines time traveling through “the future” as an Odyssey-style mythic journey home. When brilliant young scientist Dr. Lewis Moody accidentally launches himself, his secret longtime crush and three best friends 33 years into the future with his unproven quantum time machine, they find a mysterious message from their future selves: “The Only Way Back Is Forward.” Now, as they jump again and again through strange future times, will they one day find the technology to time-travel back, or are they doomed to hopelessly travel forward… forever? While investigating his ex-lover’s disappearance amidst a string of murders in Savannah’s gay community, a broken-hearted drag queen taps into the magic of his coven of queer witches only to uncover a powerful evil lurking closer than he ever imagined. From creators Andy Serkis and Andrew Levitas! 360 CE. The great god Zeus is long dead, brutally murdered in his own temple some thirty years prior. Heracles, Zeus’s son and champion, spends his days drunk and depressed as the old gods struggle to stay alive after decades of Christian disruption. When Athena’s Temple is sacked by a mysterious Centurion looking for a powerful relic that once belonged to Zeus, the old gods are convinced they have found Zeus’s killer. Now the mighty Heracles must sober up long enough to keep the lone witness, a 9-year-old blind priestess, alive long enough to identify the killer and finally find justice for his dead father. The main cover features beautiful Rob Prior wraparound artwork!

Making Your First Comic: The Good, The Bad & The Business Side