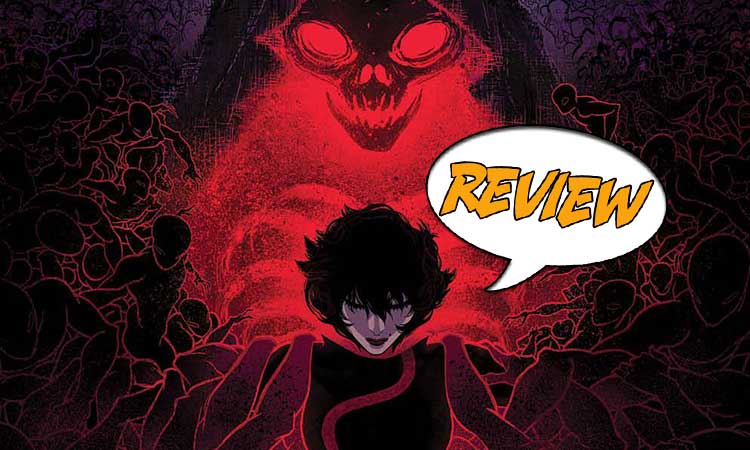 Jessica still does not know how she died, but now a being called the End rampages through the Reapers and is specifically after her! But why? Find out in Grim #3 from BOOM! Studios.

Previously in Grim: Jessica Harrow is a Reaper who ferries the souls of the dead. Her life changes one day when a living person can see her. Jessica discusses this with her supervisor, Adira. She also wants to know how she died because she feels it may have a clue to her problem. She wants to see her file. Adira refuses and tells Jess she is being temporarily suspended. Jess is even more convinced that the mystery of her death is important. She, Eddie, and Marcel sneak into records room and Jess finds her memory. But instead of showing her death, it shows her birth. Meanwhile, Adira’s assistant, Vincenzo, informs her that the End is awake – and Death is not around.

AN IMBALANCE IN THE AFTERLIFE

Grim #3 opens in ancient Mesopotamia with a ritual where a group of young women offer themselves in sacrifice to Death. The Goddess of Death materializes and accepts their offer and plans to make them her warriors in a fight that will transcend good and evil.

The scene shifts to Adira looking over a multitude of souls and lamenting that it has been eons since they last had a good war. The End approaches, claiming she lost. Adira counters that there is more nuance to conflict. But the End is not there for her, he is there for Jessica. There is an imbalance he must correct. Adira does not want to stop him, but she does want to make a deal with him. She thinks the imbalance is even larger. With Death out of the picture, things may become unstable. She wants the End to take more than just Jessica.

Jessica, Eddie, and Marcel are in prison. It is not a Baroque version of stone walls and iron bars. Instead, it is bright, white, nothingness. It is a void. Marcel asks Jessica what Adira intends to do with them. He also does not understand why Jessica saw her birth instead of her death. Jessica has no answer, but she feels guilty about bringing her friends into whatever fate has in store.

Suddenly the walls come crashing down around them. They see chaos as the End storms through the Reapers, consuming them at random as he goes. He calls out for Jessica. Eddie insists that they should run, but Jessica wants to help. As she turns back, the End grabs her. Eddie’s scythe does nothing against it. Then Vincenzo arrives and breaks an hourglass which traps the End long enough for them to escape.

As they flee, he tells them the creature is the End. He also says he knows a place they can go. Jess does not trust him because he works for Adira. He says he does not work for her; he works for Death. Death built the entire afterlife, Vincenzo tells them, but now he is missing. Vincenzo believes something drove him to leave. Jess thinks Adira is still involved somehow. Then she finds another mystery – Death has left his scythe behind. It only activates for him, Vincenzo says. But in Jessica’s hands, it comes to life. Then the End breaks in, and Vincenzo orders the others to flee!

The art of Grim #3 is stylish both in characterization and glorious color usage. The past is shown in the cool end of the spectrum while the present is portrayed in warmer colors. I love the transition between the two where we see a similar close-up of first the eyes of the Goddess of Death and then those of Adira. In keeping with the color scheme, the souls of the dead are black and featureless but outlined in red which is quite striking. We finally see the End as a hulking being clothed in shrouds. His skeletal face burns with an inner red fire.

The transition to the Void is abrupt. The page is white and featureless other than the three Reapers. That simple contrast immediately communicates that they are being held somewhere different. To me, it even registered as though it was unearthly quiet. The lack of background features draws the focus directly to the characters, and the brightness dampens the red of their outfits. Another thing that is really cool is when the End starts breaking through. Cracks appear in the featureless space and darkness starts to creep in. It is a wonderful effect.

Grim #3 firmly steps into high-stakes mystery and conflict. While the first two issues established characters and settings, now the story runs with them. I also like the presence of different Death-like beings and I wonder whether they are aspects of one being, or different individuals, but it is a fascinating way to look at Death from different perspectives.

There is an imbalance between the living and the dead, and Adira thinks she knows what to do about it.