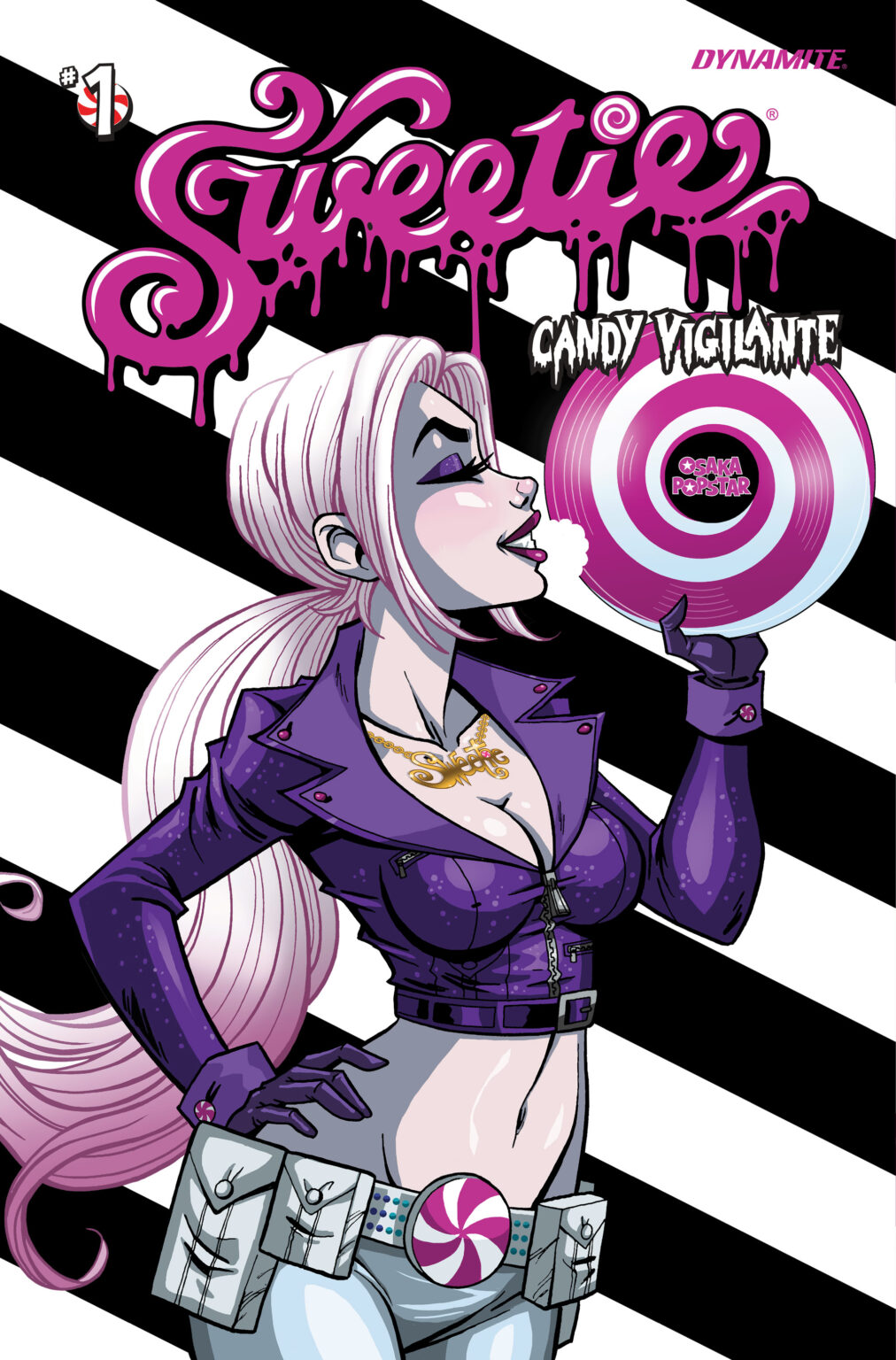 Sweetie Candy Vigilante from Suzanne Cafiero and John Cafiero is getting the comic book treatment at Dynamite Entertainment.

Here is how Dynamite Entertainment describes the character:

Honey-dipped and dark humor infused, Sweetie Candy Vigilante is a unique multimedia character following in the footsteps of other “bad girls” like Harley Quinn and Dynamite’s own Vampirella. She first debuted on the cover for the album Ear Candy by the group Osaka Popstar (featuring a dynamic punk cover of the classic Archies track, “Sugar, Sugar”). The first issue of the new comic series comes bundled with an MP3 download code to check out the song – perfect to put on while reading the book!

Sweetie is an ethereal, charming, and beautiful relative of the mythical “candy man.” She might just be a little bit unhinged, or perhaps unconventional. When she starts to notice her community of New York City being plagued by blight, decay, and dourness, she becomes hell-bent on spreading her blood-caked and sugar-coated manifesto on society. Equipped with other-worldly powers, confectionary weapons, and a passionate heart, she won’t stop until the world around her is as sweet as her!

First on her list is her favorite sweet shop the Ice Cream Bunny, run by an eponymous old friend. Only problem is, what stands there now is a front for a notorious crime syndicate. Which means it’s time for Sweetie to tear the whole place and all its thugs apart, limb by limb. All the while enjoying the new version of “Sugar, Sugar” on the jukebox!

“I’m honored to have Sweetie continue the long legacy of badass vigilante women in comics and media, including those in the stellar orbit of Dynamite’s roster,” said writer Suzanne Cafiero in a press release from Dynamite Entertainment. “I created Sweetie Candy Vigilante because I wanted to read a comic that has authentic NYC flavor infused with fantasy, horror, and dark humor. I’m really immersed in the SCV story. My lifelong NYC residency, along with childhood obsessions, love of art, music, film and comics has culminated in the creation of Sweetie, so buckle-up gumdrop!”

Sweetie Candy Vigilante #1 is scheduled to arrive in October 2022.