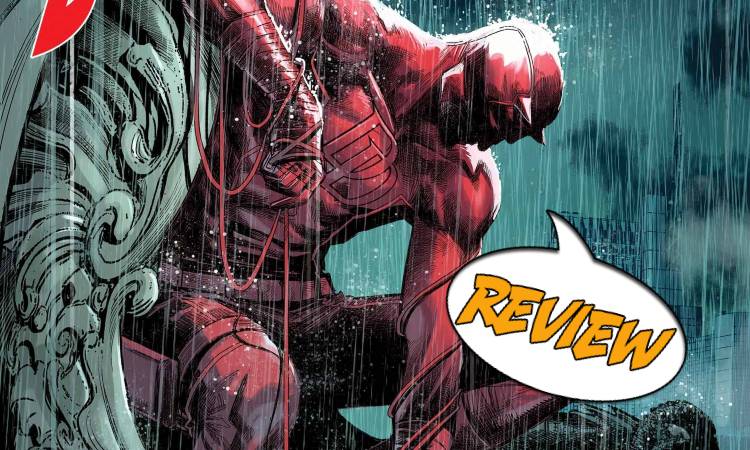 The Kingpin is dead. Matt Murdock is dead. And now, Daredevil is leaving New York for what might be the final time… Your Major Spoilers review of Daredevil #1 from Marvel Comics awaits!

Previously in Daredevil: In the wake of Wilson Fisk’s violent and visceral last act, it’s a new era for New York and the Man Without Fear! Matt Murdock has no choice but to leave behind everything he’s ever known, and Elektra is the last vestige of his former life. Everything Matt Murdock thought it meant to be Daredevil is about to change…

…including the challenges he will have to face in the cowl!

DAREDEVIL AND SPIDER-MAN: THE FAREWELL TOUR

Daredevil #1 opens with an unknown person explaining how “things have changed” and now his method of “helping” Matt Murdock has to change as well. Of course, regular readers will know that Matt Murdock is dead at the hands of The Kingpin, which makes for an awkward confrontation between Matt’s twin brother Mike and Kingpin’s son Butch. Butch promises to take over his father’s business interests and run things in a gentler way, which leads to Mike informing him that he’d better, or else there will be hell to pay. Butch can’t believe his old partner is so forward, but the arrival of Spider-Man makes it clear that he isn’t. Daredevil puts on his mask, revealing that Mike Murdock is the one who died, and DD and Spidey begin the ritual kicking of gang tuchus. It’s actually a lovely sequence, seeing two old friends working together, and only the framing of not one, but TWO ominous and horrifying framing stories.

WHAT’S UP WITH GOLDY?

This issue also features a second story that features Elektra in action, fighting her old mentor as she seeks out a new headquarters for the firm of Daredevil and Daredevil to continue their evil punching ways. Matt’s narration closing the issue makes the events involving former school chum Robert Goldman even more distressing, and Checchetto’s art makes it a goosebump-inducing moment. The art by de Latorre on the second story is equally good, making great use of Elektra’s flowing costume and showing how much the Man Without Fear has rubbed off on the World’s Greatest Assassin. My favorite part of the issue comes in the real, authentic friendship that we see between Spider-Man and Daredevil as they go “on tour.” Spidey even apologizes that he can’t reveal his true identity after Daredevil tells him that he’s actually the recently deceased Matthew Murdock, a detail that really fleshes out their partnership and the heroes’ long history working together.

Even though Daredevil #1 is the FIFTH number one that Murdock has had since 2011, the creative team is ready to tell some new and different stories, with two different (but equally successful) art teams, earning 4.5 out of 5 stars overall. It’s well worth your time to check it out, especially if you’ve been paying attention to the latest volumes of The Punisher and Elektra’s tales.

Daredevil and Daredevil leave New York, and while it's not clear where they're going, the hints we get make it clear there's good stuff to come.