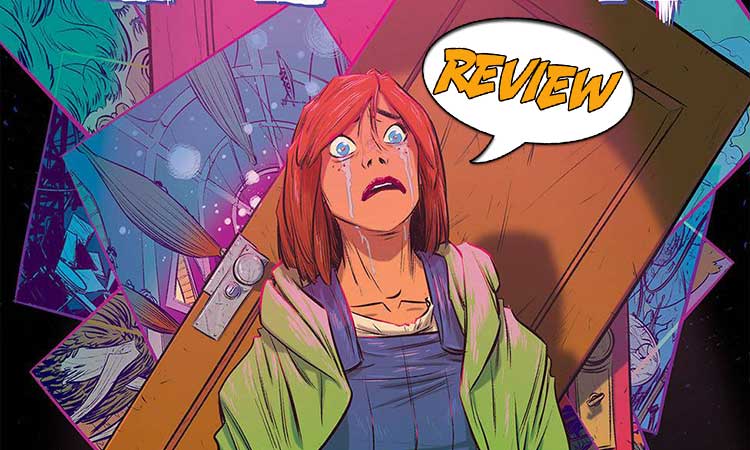 Valkira’s trail winds in and out of dreams and ends right in Stetson’s office. Is Stetson’s hunt finally over, or is there more to Valkira’s plans? Find out in Slumber #5 from Image Comics!

Previously in Slumber: Stetson and Finch are in Finch’s dream hunting Valkira who is disguised as his brother. Finch does not want to lose his memories of him. Stetson shoots the brother in his knee. It turns out not to be Valkira, but a shapeshifter who gleefully informs them they were bait for Valkira’s plan. Back at the lab, Ed is unconscious after an attack. There has been another murder, and Stetson’s card is at the scene. Stetson gets a description of the woman who arrived at the lab just before the attack – Sadie, Finch’s fiancée. Sadie returns to her job at the hospital. Stetson follows and tries to see if she is Valkira. After an encounter with the detectives, she finds out that Sadie…is not Valkira.

Slumber #5 is tense and strange. It opens with us following Valkira, who talks about how she had a purpose in her life which was taken from her, leaving her as a shadow who wanders through people’s dreams. We see her wander from person to person, killing each host before she moves on to the next one. She moves through the world but is not able to feel it. Step by step she moves on, and now she is residing in Ed.

Stetson is incredulous that Valkira gave herself up. Jiang claims she even gave him advice on what knots to use to tie her/Ed up. Stetson figures she is here for a reason. Not only that, Valkira seems to be able to read Stetson’s thoughts. She claims she has Stetson playing her game. She also claims they have a connection, one that runs deep. She kills in Stetson’s world the same way that Stetson kills in hers. Perhaps they are far more alike than Stetson ever thought.

Even though it may be a trap, Stetson decides to enter Ed’s dream. Valkira travels freely through the darkness. Stetson’s plan is to give Finch a flamethrower. She gets a garden gnome. Jiang hangs lights around the lab. Stetson wants to end this once and for all for Lyla.

Stetson and Finch enter Ed’s dream. Stetson tells him Valkira’s plan is to leave the dreamscape entirely to escape into their world. There is a red door in the dream, and that door is her way out. Stetson thinks she may have an edge because she knows a back way into Ed’s dreams. Ed’s dream takes on the setting of a fancy hotel where everyone has Ed’s face, even a dog. Despite this, Stetson spots Valkira by the eyes of her shadow. A chase ensues!

Meanwhile, back at the lab Aadya realizes that Stetson and Finch are working together, and she must stop them. With several other police along for backup, she breaks into Stetson’s office just as in the dream, Stetson breaks into…a past version of her office before it had become hers. She and her husband had brought Lyla there. Lyla, the little girl we saw a couple issues ago, was Stetson’s own daughter.

One of the cool conventions in the art of Slumber #5 is using red eyes for Valkira. We do not know exactly what she looks like, and she constantly borrows the bodies of others. Making the eyes red helps us follow her through her trail of carnage in addition to giving her a creepy look. Knowing she has been on a murder spree, we are as disquieted as Stetson when she goes to the office, borrows Ed’s body, and allows herself to be captured.

The art is dynamic and full of movement. I have come to like the way characters are drawn. Even in the real world, their joints seem more curved, more fluid, especially when Valkira is in control. I think it connects the two worlds more. Speaking of the two worlds, Ed’s dream is completely different from the other dreams and nightmares we have seen. I enjoy the humor of everyone in the hotel having Ed’s face in addition to this becoming the way Stetson and Finch can sneak in, which is by wearing Ed masks.

Slumber #5 is a surreal horror story that is building toward a conclusion in grand style. Its very concept means that it might take a couple of read-throughs to be thoroughly confident in the plot, but even the first read is tense and exciting.