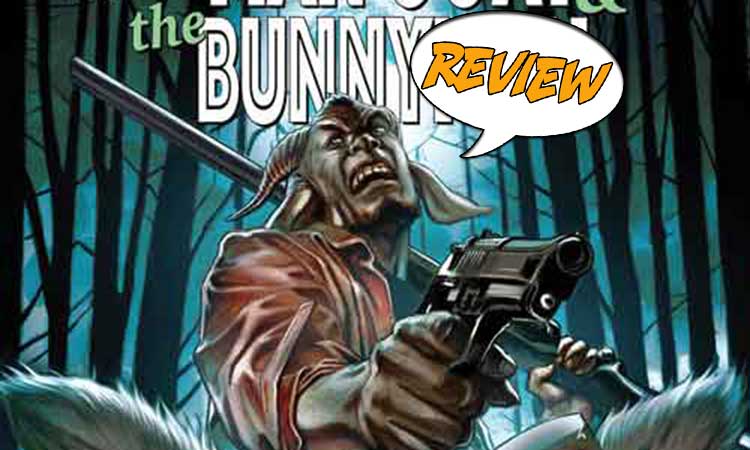 Man Goat and The Bunnyman: Green Eggs and Blam #1 Review

Two bickering hunters who just happen to be a talking bunny and a satyr try not to kill each other.  Your Major Spoilers review of Man-Goat and The Bunnyman: Green Eggs and Blam #1, awaits!

MAN GOAT AND THE BUNNYMAN: GREEN EGGS AND BLAM #1

Previously in Man-Goat and The Bunnyman: The duo seem to be on not the best of terms as they are brought together for their next mission.  A misunderstanding has left Floyd AKA The Bunnyman convinced that his partner Phil has impure desires for his mother.

Man-Goat and The Bunnyman: Green Eggs and Blam #1 opens with a flashback of Floyd’s father fighting off werewolves, with his child under his arm, trying to reach a portal to safety.  In present time, Phil and Floyd are mid-argument when The Jersey Devil arrives.  After dealing with that,  the two head to their cabin where they continue their fight.  Floyd leaves for a walk where he encounters a robot that appears to try and capture him.  He escapes with the help of Bigfoot, Mothman, and Jack Jackalope.  Hitching a ride with Jack, he goes home where he believes he sees his girlfriend cheating on him with Phil.  He flees and heads to his childhood home, where he discovers clues to where his long-lost father might be.

Not every comic needs to be full of soul-wrenching ennui or philosophical drama.  But there’s a difference between fun, silliness, and immaturity.  This one definitely falls on the immature side of things.   While the two opening sequences have decent action, with the second having a fun gimmick to it, things quickly devolve as it becomes clear that all the conflict between the main characters comes from whether or not Phil had sex with Floyd’s mother.  The way that plot point keeps getting revisited edges towards the absurd.  The rest of the plot is fine for the most part, things do jump quite quickly without much explanation, but there is an understandable path.  But, there is a lack of subtlety here, that makes things pretty predictable and not very interesting to watch unfold.

The art in Man-Goat and The Bunnyman: Green Eggs and Slam #1 is full of muscular bodies, busty women, and emotive cryptids. It fits the story well and helps enhance some more of the enjoyable parts, specifically the action sequences.  There is some decent attention given to the facial expressions that does a good job adding some depth to this comic.

BOTTOM LINE:  A SWING AND A MISS

Man-Goat and The Bunnyman: Green Eggs and Slam #1 tries to inject some tension between the two main characters, but it mostly plays out like an argument from one of the lesser National Lampoon movies.  The plot is serviceable but not interesting enough to save this one.  2 out of 5 stars.

The enjoyable action sequences and decent art, isn’t enough to overcome the immaturity of the interactions between all the characters.