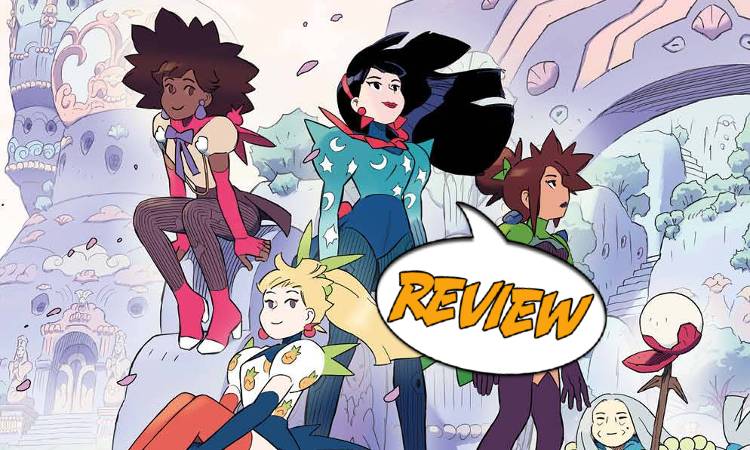 They are the Sacred Fruit Guardians of Planet Earth, but there are big changes in their future. Your Major Spoilers review of Flavor Girls #1 from Archaia awaits!

Previously in Flavor Girls: Naoko, Camille, and V are the Flavor Girls, Sacred Fruit Guardians of Earth! They defend the earth-the source of their power-from the threat of ever-looming aliens, whose motives regarding the planet and its peoples are yet unknown… But Sara, a normal young woman and a U.N. applicant just doing her best to save the world, gets involved with the Flavor Girls in a way she never could have imagined.

IN THE WAKE OF AN ALIEN INVASION

Twelve years ago, an alien ship entered Earth’s atmosphere with unknown intentions. A group of astronauts were gathered to make first contact with the Agarthans, while a young woman named Naoko reported from the planet below. The aliens revealed their hostile intent immediately, leaving no survivors and an injured Naoko, but now she is the leader of the Magical Girl team called the Flavor Girls! Well, they don’t call themselves that, but y’know, the general public does. In the here-and-now of Paris, the aliens are attacking again, and a young woman named Sara is at the center of the destruction. But when she tries to escape, she finds herself faced with a giant glowing vision of… a pineapple? Transforming into her own Fruit Guardian form, Sara tries to fight her way out, only to find that it’s not that easy. Of course, the Flavor Girls arrive just in time to save her and offer a proposition: Join their number and begin the training necessary to become an official protector!

First off, Locatelli-Kournwsky is the mind behind Persephone, which reframed Greek myth in a modern context, so I expected a story that would diverge more from the tropes of magical girl stories. This issue surprised me by playing things mostly straight with the costuming and much of the visual imagery of this issue. The alien invasion is much more violent than I expected, which makes for an interesting juxtaposition with the stylized cartoon design work. After kicking off with the flashback, the first section of the book movies at high velocity to get to the point where Sara gets her powers, with some really impressive artistic moments (like the giant magical pineapple) Weirdly, though the second half of the issue features a trek into the jungle to begin Sara’s training as a Flavor Girl, cutting off at what feels like an odd point and losing some of the momentum of the first half. The art is really excellent throughout the issue, with creative layouts and manga-style detailed backgrounds balancing against characters who resemble modern thin-line animation figures, rounded out with pleasant pastel coloring throughout.

While this comic has 48 pages of action (and several pages of backmatter to explain the backgrounds of Camille and new girl Sara), Flavor Girls #1 is fun stuff, well-drawn and colored, with an eight-dollar price tag that might make you question the purchase, but if you have the scratch to spend, it’s well-deserving of its 4 out of 5 stars overall. It’s a well-executed issue that makes me want to read more of these characters and their world, making for a successful number one.

Sara's introduction to the world of magical girls is exciting and visually expansive, combining bandes dessinées and manga into something that feels at once familiar and new.