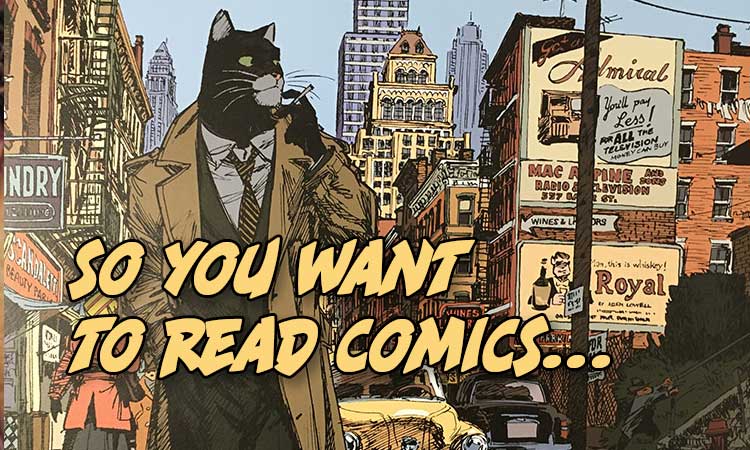 So You Want To Read Comics: Anthropomorphic Edition

It’s getting fuzzy with this week’s “So You Want To Read Comics”.  This is our weekly feature where we take a look at a single topic or genre, then give you two comic book recommendations, perfect for new readers, based on that topic or genre.  This week we’re taking a look at comics that feature anthropomorphic characters.

In case you’re wondering, anthropomorphic is the adjective used to describe non-human things that are presented with human characteristics.  Or, basically the thing that lays at the foundation of Disney’s empire.  Characters like Mickey Mouse and Bugs Bunny can be considered to be anthropomorphic characters.  Ascribing human traits onto non-human characters has roots well into the early days of recorded history,  being present in many ancient people’s mythology and stories.  The use of animals in particular, has been used to convey metaphors like Aesop’s Fables and Animal Farm by George Orwell.  These types of characters have become a mainstay in nearly every genre, medium, and form of entertainment.

So let’s take a look at a couple of comic book series that utilize anthropomorphized characters well.

Everyone knows Spider-Man.  But not everyone knows his porcine counterpart, Spider-Ham.  Coming from a universe where all of everyone’s favorite Marvel superheroes are anthropomorphized animals, Peter Porker tries to get by as a photographer who happens to have the same superpowers as Spider-Man.  Basically, this series started out as a parody, but it went on to garner a fandom of its own and has become popular enough that Spider-Ham has even managed to make it into the movies.  A lot of the jokes in this collection are puns based on characters from the main Marvel continuity,  but having a deep knowledge of them, beyond their name, isn’t really necessary to enjoy the funny and clever ways that the heroes in these stories utilize their animal nature in conjunction with their super powers.

Blacksad tells the story of a detective facing local government corruption, racism, The Red Scare, and dark family secrets, one case at a time.  Oh, and he’s a black and white cat.  Blacksad is a celebrated comic series that takes everything wonderful about the days of classic hollywood and gritty noir stories and displays it through a diverse cast of anthropomorphized animals.  But, rather than play this for laughs, Blacksad uses the various animals in its cast to say something deeper, sometimes about race, sometimes about nationality, sometimes about the various ridiculous things that cause one person to harm another.  It should be noted that while nothing in this series is particularly gratuitous, it does have some content that might not be suitable for children.  Also, as of the writing of this, the most recent volume of Blacksad is not available everywhere in the world, so now’s the time to get in before it is wide-released.

What are some of your favorite anthropomorphized characters and stories?  Let us know in the comments section below.