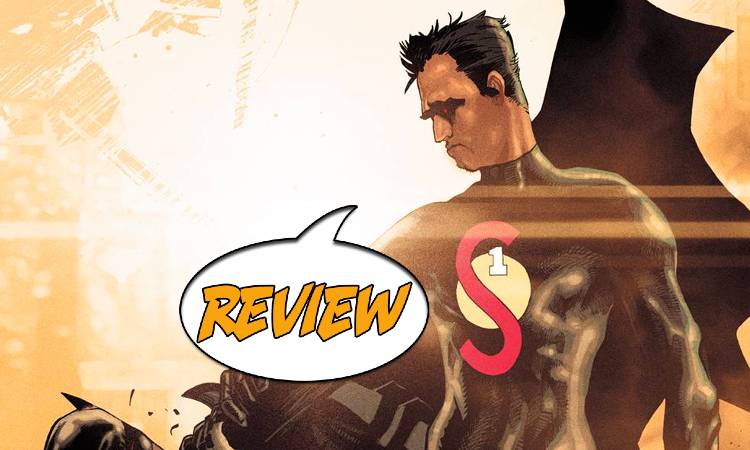 Thomas Wayne comes face-to-face with Subject One, and... Let's just say they're not their World's Finest team. Major Spoilers review of Flashpoint Beyond #3 from DC Comics awaits!
Review

Previously in Flashpoint Beyond: Thomas Wayne’s investigation into the Clockwork Killer goes sideways when he is confronted by a deadly alien invader the world knows as… Project: Superman? But what’s happened to the Kryptonian and Krypton in the World of Flashpoint? Will Thomas Wayne do what he has to in order to stop Superman-or has he changed?

And what are those strange earthquakes now erupting across reality?

RETURN TO THE WORLD  OF FLASHPOINT!

Flashpoint Beyond #3 opens with a familiar sight, a tiny craft rocketed from Krypton with a baby inside, seeking a new home on Earth. The difference is, this child has been sent as an advance scout to destroy and disarm human society before the full-scale invasion begins in earnest, and its arrival on Earth brought a meteor storm that destroyed the city of Metropolis. Now Subject 1, AKA the Super-Man, has arrived to recruit Batman to his cause in the hopes of saving the world from his own people. Ever the contrarian, Batman says no and stalks away in a huff. Elsewhere, the Central City police find a body dressed in Reverse-Flash’s costume, while the presence of a living Thomas Wayne continues to cause cracks in Hypertime, leaving Time Masters Jeff and Bonnie in a horrific timestorm as reality threatens to shake apart around them.

THE INVASION IS COMING FROM INSIDE THE KRYPTON!

Jeff also mentions something having to do with Pariah, the big bad of Dark Crisis, implying that this story somehow ties into that one, but three issues in, I still can’t figure out how or why. The question of “WHY?” is all over this comic, as I continue to miss the appeal of a Batman who refuses to do anything, be a part of any group, or comport himself as a protagonist that I would like to read about. We do meet some new heroes of this Flashpoint reality, such as its Swamp Thing, Jason Woodrue, and Poison Ivy and Super-Man intend to collect a group of new heroes who seem to be variations on existing themes. This brings to mind the Marvel Vs. DC Amalgams, while the Kryptonian invasion evokes the overarching Omni-Man plot from Invincible. Even though there’s nothing new under the sun in the comic’s plot, the art is really first-rate, especially the big splash page of Subject 1, who gravely intones that “Everything matters.”

From The Kingdom’s Hypertime conceit to the return of the Time Masters to the giant multiversal threat that may or may not be the same as the one in the OTHER big crossover series, Flashpoint Beyond #3 gives us a plot full of leftovers (the multiple writing teams probably didn’t help) with appealing presentation, as both art teams impress, with the total package averaging out to 2.5 out of 5 stars overall. I would recommend this series to anyone who really likes to see Poison Ivy acting heroically or enjoys the work of Xermanico or Janin, but I don’t think missing this one will be a huge regret. Much as with Doomsday Clock interacting with Dark Nights: Metal, Johns and company seem to be doing their own thing, while editorial tries to make it all jibe with goings-on elsewhere in the DCU, but this seems even less essential than that eminently skippable series turned out to be.

Behind a *spectacularly bad* cover is a well-drawn issue whose plot is a kludged-together mishmash of previous events, which may or may not tie into Final Crisis, but continues to give us variations on the same grimdark alt-reality themes.