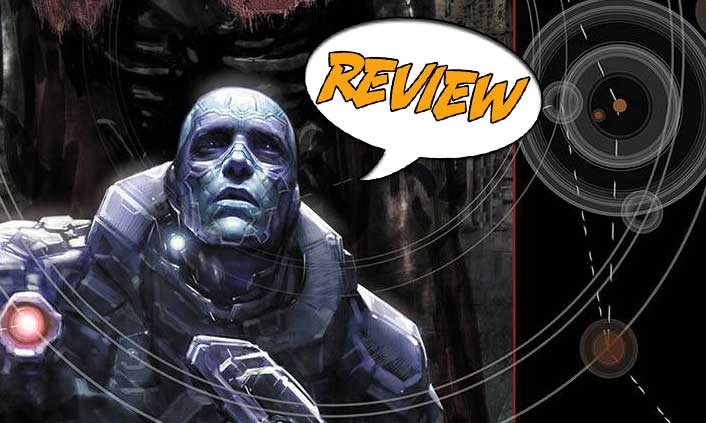 With the last days of humanity on the near horizon, a desperate plan is enacted to find a surprising salvation.  Your Major Spoilers review of Starhenge #1, awaits!

Previously in Starhenge: A robotic enemy has been waging a war against humanity for a long time and is nearing victory, while a queen seeks out a legendary force to save them.

Starhenge #1 opens in what appears to be an ancient time, with a group of hunters coming across a pool where a man emerges.  They quickly dispatch him.  The narrator then explains how in the future an ancient A.I. is unearthed and it immediately wages war against humanity. The narrator is then revealed to be a young woman named Amber, living in modern-day California.  She spends time with her boyfriend before she plans to leave for England.  They make plans to see each other after Samhain before saying goodbye.  In the future, Wylt is introduced, he’s called upon by the queen of what’s left of humanity and informed that in order to bring back a legendary group of warriors, he’ll have to travel into the past.

A WHOLE LOT GOING ON HERE

It might come as no surprise, but for a comic book story that takes place in three different time periods, Starhenge #1 has a lot going on.  While nothing is quite fully explained here in the first issue, there is no shortage of lore being shared.  The way that so many of the terms and names used here aren’t explained, gives this a “prog-rock concept album” feel (Rush is namechecked in this issue). There is narration to help shed some light on things, but the voice given to Amber feels out of place here.  So much of this issue has a space opera or mystical feel to it, having a modern-day teenager explain things with a levity that is jarring.  All in all, this issue comes off as more like scraps and snapshots pieced together but a lot of context is missing for anything to make a lot of sense.  But, the scale of it all is impressive and the tidbits shared are interesting enough to create a solid hook.

There’s no doubt that Liam Sharp has earned his reputation as a legendary comic book creator, but if there was, Starhenge #1 should put that to rest.  Each time period is given a distinct look, with the past having a misty painting-like feel, the modern-day being mostly grayscale pencil art, and the future being a combination of biomechanical body horror and abstract blending of star charts and energy.  Like the story so far, the art here doesn’t give anything up easily, the denseness of it all requires close examination, but the effort is worth it.

Starhenge #1 is swinging for the fences here, really trying hard to be the next big space opera and for the most part, it makes a strong case for itself.  The universe created here is engrossing and is filled with tantalizing tidbits that sci-fi fans will love, and that’s not even accounting for the visuals which are impressive in their own right.  The one mark against the book is a narration that feels too out of place and unfortunately, has a negative impact on the issue as a whole.  4 out of 5 stars.

Starhenge #1 is a fascinating first chapter in what looks to be an intricate piece of science fantasy. Boosted by strong visuals, it’s easy to overlook some tonal inconsistencies with the narration.