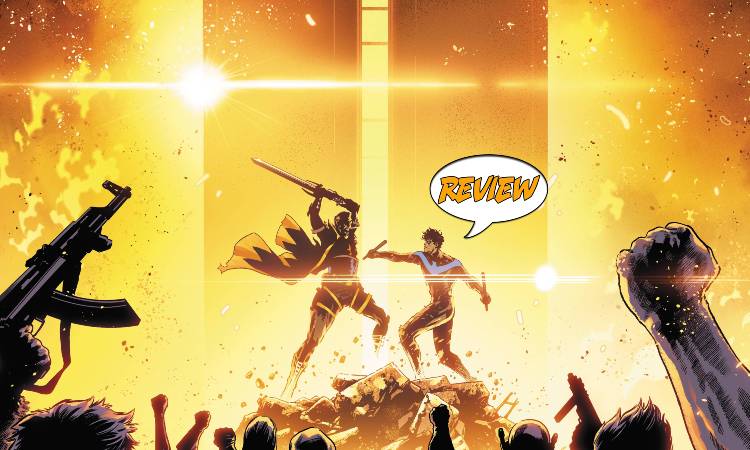 Nightwing and Deathstroke have fought each other before…  but this time, the lives of the entire world hang in the balance! Your Major Spoilers review of Dark Crisis #2 from DC Comics awaits!

Previously in Dark Crisis: As the good people of the world mourn the loss of the Justice League, the forces of evil have seized the opportunity to wreak havoc in a world without its heroes! Leading the charge is a super-powered Slade Wilson… but this time there’s something dark fueling his rage. With a massive army laying siege to Titans Tower, only Nightwing will have what it takes to stand in the way of Deathstroke’s forces.

But is this a fight Dick Grayson can win?

While Pariah prepares to destroy Earth Zero in the hopes of recreating the multiverse, Deathstroke has assembled his Secret Society to lay siege to Titans Academy. After nearly dying in an explosion last issue, Nightwing is barely able to stand, but when Deathstroke challenges him, the former Robin has to face his old foe in combat while his students and the assembled super-villains watch. Nightwing gets in the first strike, but Slade is ready to kill him in return… until a couple of Supermen arrive and new orders come down. Elsewhere in space, Kyle Rayner escapes from captivity only to find himself confronted by an old friend who wants him to join a force to seek out Pariah and his undead interdimensional army.

On the one hand, there are a lot of interesting ideas in these pages and Williamson is interested in doing more than remixing the previous Crises, which was my worry when his team (Ares, Darkseid, Doomsday, Eclipso, The Empty Hand, Nekron, Neron, The Spectre, and The Upside-Down Man, each of whom was the Big Bad of a previous Crisis) was announced. The assault on Titans Tower is a really taut sequence, featuring some powerful art, but by the time we get to Rayner in space, things slow down considerably. I have mixed feelings about the use of Hal Jordan and the Corps in these pages, especially after his previous appearance made it clear that Hal thinks he’s the only one who can save the day. We also get another quick vignette explaining that Wally has assembled all the other speedsters to track down Barry Allen, a moment that STILL hasn’t been shown on-panel, which feels like a “show, don’t tell” moment for this story.

Those moments aside, though, Dark Crisis #2 reads pretty well for a book with more than 100 characters, three mutliverses, and so many moving parts and I appreciate the parts of the art that really get the job done, even when you factor in the moments that are less successful, resulting in 3 out of 5 stars overall. As someone who remembers buying Crisis On Infinite Earths #1 off the stands, it manages to capture some of that same excitement, even with 35 years of sturm und drang and cynicism weighing me down. If you’re in the mood for crossover madness, this book will scratch that itch.

The drama works pretty well on Earth, but the space side of things leaves me cold, and Black Adam leading a new Justice League sounds like the worst idea ever. Still, this issue has a lot going for it.