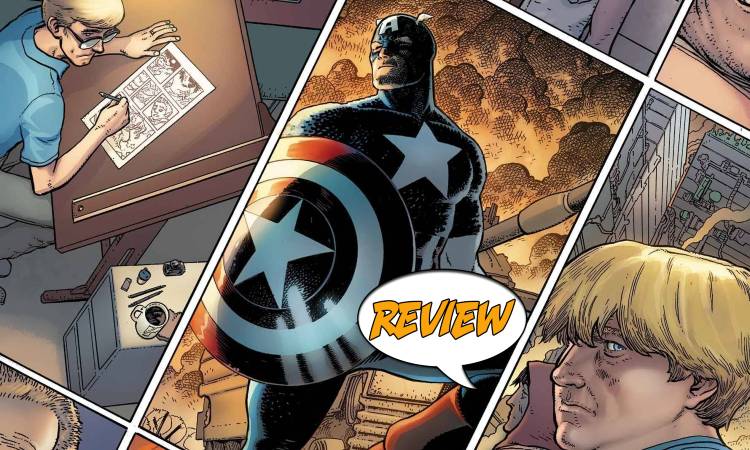 The Multiversal Masters have defeated dozens of Steve Rogers throughout the omniverse. Putting them in prison together? That was a mistake. Your Major Spoilers review of Avengers Forever #7 from Marvel Comics awaits!

Previously in Avengers Forever: Steve Rogers is a mild-mannered ninety-pound guy from New York, who wakes up one morning in a prison cell, no idea how he got there. Even weirder is that the guy in the cell next to him…is also named Steve Rogers. Why is there a secret prison filled with misfit Steves, none of whom have ever heard of a Super-Soldier Serum? And what sort of dark and mysterious version of themselves will they have to unleash in order to escape?

This issue opens with Steve Rogers, a young artist who wakes up in a prison cell, for no reason he can understand. When he ventures out, he meets his fellow prisoners, each also named Steve Rogers. One is angry and defiant, one is quiet and frightened, one is silent and sullen, and one is… a dog? But what they all have in common is that they’re Steve Rogers, and eventually the defiant Steve’s attitude rubs off on one of his comrades.  Then another…  and another. By the time the mysterious Weapon America ventures out of his darkened cell, all five of them are determined to break loose, no matter how hard they keep getting knocked down. They’ve even figured out what their assailants have been using to take them out, and with coordinated reflexes, each of them catches… a shield.

That’s when Yeoman America welcomes them to the army of Captains America!

As much as I enjoy this issue, the introduction of TEN alternate Captains America (including Earth-993’s Yeoman, Mini-Marvels Cap, Cap-Wolf of Earth-666, and Marvel Apes Cap) is somewhat overwhelming, raising the stakes of an already crazy story to new heights. More than that, the final pages reveal that the masterminds behind the torture of the various Rogerses are Ghost Rider, Deathlok, and the Invincible Ant-Man, making this title’s primary recurring characters feel a little sadistic. The art is nicely done throughout the issue, making it clear that the four men who are most of are cast are actually the SAME man, and the show of their courage is a nice study of what makes Captain America tick, even as it raises the stakes of the Avengers’ conflict high enough that I’m a little winded.

I’ve heard complaints about the vast scope of this book previously, but if you have had that worry before, Avengers Forever #7 will stomp that accelerator to the floor, in ways both good and bad, with strong character work, some fun alternate cap designs and strong art earning 3.5 out of 5 stars overall. As someone who has been with this book since the beginning, I wouldn’t recommend this as a jumping-on point, but it’s a better-than-average issue regardless.

An already crowded story gets even more crowded and I'm tired just thinking about it. That said, it's a well-drawn issue that surprised me as a reader, so I'll still recommend it.