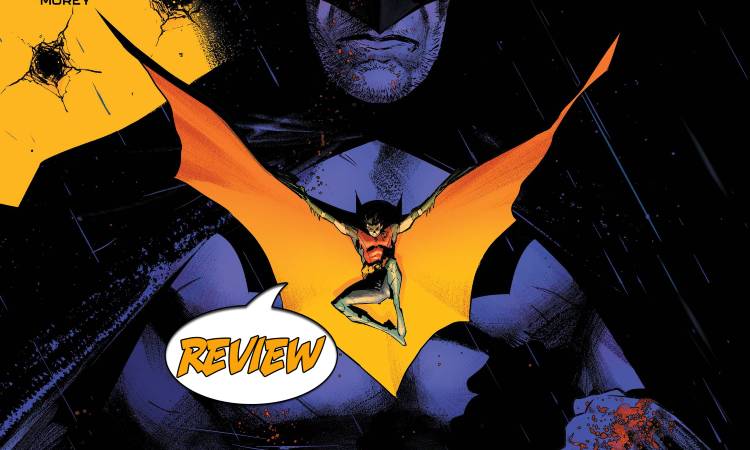 What is The Penguin’s master plan? And WHAT is Failsafe? Your Major Spoilers review of Batman #125 from DC Comics awaits!

Previously in Batman: Bruce Wayne is at a turning point, haunted by dreams of a dark future, while Gotham City billionaires are being gruesomely murdered. With the discovery of an archenemy’s involvement and a tragedy unfolding, the Dark Knight’s nightmares are just beginning. Failsafe starts here. Plus, there’s chaos in Gotham as the underworld fights over one of its crown jewels… and Selina Kyle is caught in the middle. Can she stop the bloodshed and maybe even make a little money in the process?

“I NEVER DREAM, UNLESS I WANT TO”

This issue opens with a strange one-page flashback, as Alfred tidies the Batcave, only to be distracted by an unexpected beeping. Cut to Batman awakening from a dream of the three Jokers, disturbed that his subconscious seemingly betrayed him. Taking to the streets, he finds a hostage situation and intervenes, only to find one of his old high society friends murdered. The trail leads to The Penguin, who has vowed to kill anyone in Gotham City who inherited more than five million dollars, setting Batman and Robin into motion. As Bruce Wayne, the Dark Knight makes himself a target at the glitzy Flugelheim Gala, only to discover that sometimes, a Penguin isn’t a Penguin… It’s a Clayface. That’s when a stray shot catches Robin in an artery, and Bruce suddenly has to rush Tim Drake to the hospital, all the while remembering his LAST trip to an emergency room with an injured Robin. Of course, once he’s at the hospital, the final pieces of Penguin’s master plan fall into place.

THE LEGACY OF THE PENGUIN

First and foremost, this is a beautiful issue of comics. Jiminez excels at both close-up moments (like Bruce and Tim’s conversation in the cramped Batmobile as they rush for help) and big set pieces like Batman’s sudden appearance to take out the sniper. The backup tale, featuring Catwoman being hired to find the beneficiaries of a will, is likewise really good, even though the majority of it takes place in Catwoman’s living room with Selena in a sleep shirt. As for Zdarsky’s take on the Dark Knight, it’s somehow both perfectly in keeping with the brutal armored vigilante of the New 52 and O’Neil/Adams hairy-chested love god Batman of the 1970s. Penguin even looks a bit like Danny DeVito’s movie incarnation in these pages, which makes his vicious plot that much more effective. The dialogue is also really well-handled, giving us a few wonderful new Batman bon mots as well as a bluff(?) about previously injecting Clayface with plastic explosives so that he can blow him up during the events of the issue.

BOTTOM LINE: DANG, THIS IS GOOD

In short, Batman #125 is a really impressive new era for the Caped Crusader, playing off of previous stories well while giving us something that feels new for Gotham City, featuring the incredible image of Batman wearing most of a tuxedo, his mask, and utility belt and looking for all the world like a pulp hero, putting a bow on a very well-deserved 4.5 out of 5 stars overall. It’s been a long time since I’ve put Batman’s main book on my pull list, but this issue made the jump easily. You should really check this out, even with the elevated price tag. It’s that good.

It's an issue full of fabulous art and really strong dramatic moments well worth your attention.

Looks like I'm gonna be reading Batman for a while.

PREVIEW: The Joker: The Man Who Stopped Laughing #1