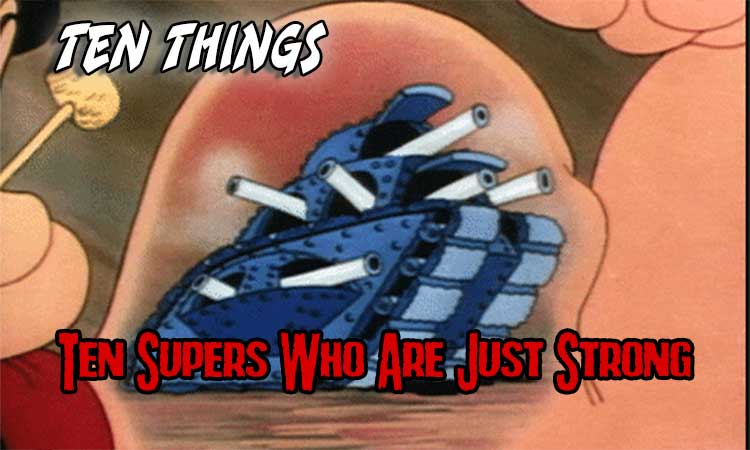 Ten Supers Who Are Just Strong

Some heroes leap tall buildings in a single bound, some are faster than a speeding bullet. But what about those guys and gals who are just…  strong? Welcome to Ten Things: Ten Supers Who Are Just Strong!

Whooshman-Bicarbonate Films, in conjunction with An Amateur Comics Historian and the obvious caveat that they’re probably invulnerable, too, but cut me some slack, it’s a required secondary power, Presents: Over six feet tall in his unarmored form, Piotr Nikolaievitch Rasputin apparently grows a full foot when he armors up, and the ’90s X-Men video game notwithstanding, his massive strength is his only truly super-power. That said, he’s one of the most beloved members of the X-Men as well as one of the most visually distinctive characters in the Marvel Universe, thanks to Dave Cockrum’s amazing character design.

Just don’t ask me how his disappearing pants work. A member of the Wildbloods team, Stones and his compatriots broke into a secret facility to find an unexpected treasure within – The cryonically-frozen body of General Glory!

A one-shot character from the pages of Justice League Quarterly, Stones is a parody of Image Comics’ first release heroes, specifically those from Rob Liefeld and Jim Lee, and as such, he’s just a big, dumb rock guy who punches things and makes one-liners. I particularly enjoy the “pebbles” in his speech balloons. Another parody character, this one from Marvel Comics, Dynaschmoe is the leader of the B.L.U.N.D.E.R. Agents, foes of Knock Furious, Agent of SHEESH. He made a single appearance in the pages of Not Brand Ecch circa 1967, but hilariously, has been made an official denizen of Marvel Earth-665, meaning that canonically, radioactive socks exist and could show up in Spider-Verse. A member of the Crazy Eight, a team of superheroes empowered by accidental exposure to Wonder Man’s ionic energy powers, LaHoya Scripps is a petite actress who gained super-strength. Not to be confused with the mutant from the Generation X TV pilot, Buff is fun to watch because she’s one of the smallest members of her team, but also their heavy hitter, a trope that I feel we don’t see enough in comics. Another petite girl (formerly), Mary MacPherran is also known as Skeeter due to her diminutive stature. Thanks to Doctor Doom and the machinery of The Beyonder’s Warworld, she has become a physical match for She-Hulk, and has repeatedly sparred with that hero due to a weird grudge. In her most recent appearances, she and She-Hulk have come to terms with one another, striking up an odd friendship where both of them can blow off steam by sparring on good terms rather than tearing up Midtown. The bruiser of Arsenal and Nightwing’s 2000s Outsiders team, Grace Choi doesn’t have a mask or a nom de guerre, but she does have a ton of heart. A former bouncer, she found love with fellow hero Thunder, becoming a cornerstone of the team until Thunder was severely injured. Grace quit, which led to the dissolution of the Outsiders team. She has not, to my knowledge, reappeared in the post-Flashpoint universe, but did make it to TV in the Arrowverse’s Black Lightning. Local hero of Bailey, New Jersey, Henry Hayes bumped heads with Mr. Miracle before Booster Gold recruited him for the first Conglomerate team. A good, decent man, Maxi-Man chafed at the team’s corporate nature, eventually quitting when the perfidy of sponsors of LexCorp came to light. He is one of the heroes who reputedly died in Roulette’s superhuman fight club, but since we never saw a corpse, I don’t believe it counts. Former Golden Glove boxer Jeremy Wootten gained his powers from foolishly scarfing down a serum that had given rats super-abilities, but had never been tested on humans. An attempt to return to boxing led to the near-death of an opponent, forcing him to give up the game. Rather than go to jail, he was released into the custody of the All-Winner’s Society, taking his nom de guerre from his favorite cigars as he set out to learn how to safely punch evil. A native of Changralyn, a world dominated by the oppressive forces of The Citadel, Charis-Nar was the first to break his people’s dictate of pacifism. Joining the rebel alliance known as The Omega Men, he was dubbed Broot, using his tremendous strength and size to battle for the lives of the entire Vega system.

You wouldn’t like him when he’s angry, but when he’s calm, he’s a thoughtful and philosophical being. The strongman of the Fantastic Four, Benjamin J. Grimm has established himself as one of the most beloved heroes in his world. Though not as strong as the Hulk nor as smart as his pal Mister Fantastic, The Thing is renowned for grit and determination, utterly refusing to give up even in the most daunting of circumstances. He once faced down the Champion, an Elder of the Universe whose physical power dwarfed even his rocky strength, impressing even the immortal with his grit. Of course, if a foe with a broken jaw, unable to stand, crawls across the ring to insist you keep fighting him, even the toughest of us might take pause.

Once again, this week’s topic, Ten Supers Who Are Just Strong, is all me, but feel free to follow along @MightyKingCobra to suggest a topic of your own! There’s always more Ten Things madness on my Twitter or check out the full Twitter archive here! As with any set of like items, these aren’t meant to be hard and fast or absolutely complete, because super-strength is the third most common super-power in history, after flight and “being rich.” Either way, the comments section is below for just such an emergency, but, as always: Please, no wagering!