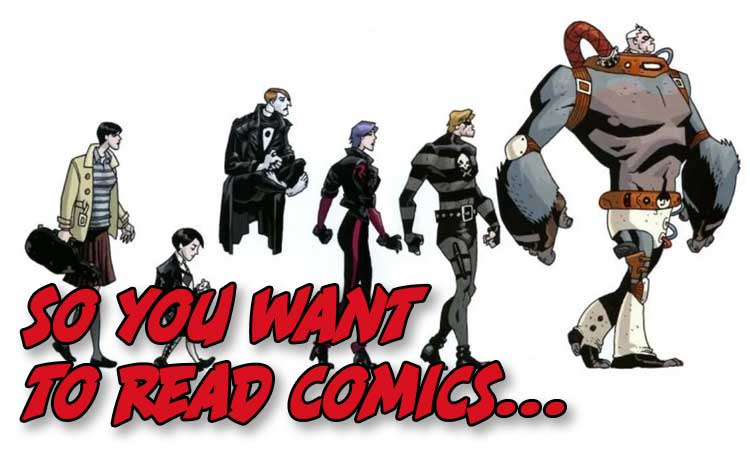 Get your domino masks ready for this week’s “So You Want To Read Comics”. This is our weekly feature where we take a look at a specific topic or genre, then give you two comic book recommendations, perfect for new readers, based on that topic or genre.  This week we’re taking a look at comics for fans of Netflix’s  The Umbrella Academy.

In February of 2019, the first episode of The Umbrella Academy aired and has managed to foster three seasons.  Featuring the dysfunctional and bickering adopted children of Reginald Hargreeves, each with their very own super power and personal neurosis.  The Umbrella Academy, while technically being a superhero show, is more about how people come to terms with living up to, or failing to live up to, expectations, harboring family-born traumas and the impact it has on adult life, and the importance in finding connections in this world and nurturing them.  All while being a stylistic, off-beat, and at times manic, action-adventure.

So here are a couple of comic book series to check out if you’re a fan of Netflix’s The Umbrella Academy.

Sometimes I feel bad with these super obvious recommendations, but really, it’s hard to go anywhere else and find the same brand of absurdity mixed with heartfelt emotion.  Coming from the mind of Gerard Way, lead singer of My Chemical Romance, The Umbrella Academy was published in 2007 and it very quickly became a critical darling.  It was praised for being somewhat of a deconstruction of superhero comics, while not dipping into over-the-top gruesomeness nor having a mean spirit about things.  On top of this, there’s a real complexity not only with the characters but their relationships.  Nothing is as simple as “this person doesn’t get along with this person”, every interaction has layers and emulates the types of conversations that only very familiar people can have very well. The art was done by Gabriel Ba, who is well known for a very unique look that tip toes the line between abstract and traditional comic art, giving this series an expressive look.

In 2016 DC Comics launched Young Animal, an imprint under their oversight.  This imprint was designed in part by Gerard Way and featured many titles that challenged the norms of comic books, these titles also often featured themes relating to the relationships between parent and child.  One of these titles was Mother Panic.  This series tells the story of the titular character, a new vigilante in Gotham City, going after the wealthy elite in town.  The story of Mother Panic mirrors that of Batman in a few ways, but while Batman focuses on taking out crime on the street,  Mother Panic sets her sights higher, choosing to target those who are part of the systems that create crime.  Beyond this, this series has a strong focus on Mother Panic’s parental relationships and how both the good and bad sides of those helped mold her into who she is and allowed her to form the views that turned her into a crimefighter.

What do you think of the Umbrella Academy adaptation? Do you have any recommendations of your own?  Let us know in the comments section below.