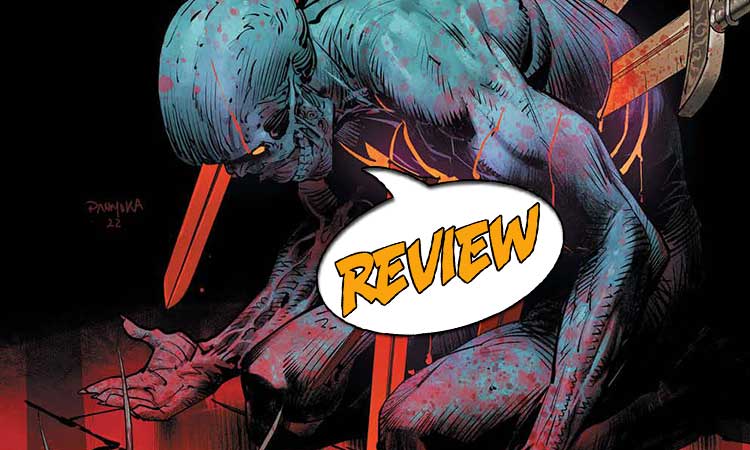 Christmas approaches and soon it will be time for Bridgette’s plan to be put in place. Will they be able to hold off three Arthurs until she is ready? Find out in Once and Future #27 from BOOM! Studios.

Previously in Once and Future: Time passes and Rose is reminded that the New Year is fast approaching, as is her meeting with the Green Knight. Bridgette reveals that her plan is to let Leir loose, hoping for a huge storm to complicate the battle. She also hopes that the River Lethe, now running through Bath, can be diverted to the Avon. Elaine tries to get the Grail, this time by trying to turn Bev into a Galahad. This lures Lancelot out, and Elaine talks him into going after their son. Lancelot finds him and talks him into going after the Grail again.

As Once and Future #27 opens in the Grail Castle, Galahad does not accept that Elaine is his mother. But at her urging, he tries again to get the Grail. Lancelot thinks he is deluded and wonders at Elaine’s insistence. She claims he is now Galahad, Percival, and Bors. Galahad returns to them without the Grail and collapses. Then we see the count Elaine has been keeping of his attempts.

On Christmas Eve, magpies announce to all that whoever draws the sword is the true King of England. Each of the three Arthurs hears this, and their Merlins advise them to make haste to London before either of the fake Arthurs gets there. Bridgette also hears the magpies, but Robin Hood urges her to do nothing. She decides they are going to stop any Arthur from getting the sword. Duncan does make an attempt but is unable to pull the sword from the stone.

Then there is gunfire. Hempleworth arrives with a handful of armed men. He immediately recognizes Bridgette, calls his men off, and insists she will know why there is a sword in a stone here now. James is with him. He was an agent of the PM, as we may remember, but when everything went down, James helped Hempleworth to escape and they have been organizing a resistance. Bridgette enlists them to help prevent anyone from getting to the sword. If they can only get past Christmas, her plan can take effect. The Arthurs descend and everyone tries to hold them off.

Back at the Grail Castle, Galahad makes another run for the Grail. Lancelot asks him why he persists. He says that if he succeeds, it proves he is Galahad, and then his father will have to recognize him. Deep in the Castle, he fights a monster and then finds Lancelot at his side. Lancelot understands his motivation, calls him his son (whether or not he believes it), and bids him achieve the Grail.

At the battle, it gets harder to hold off the multiple armies. But Bridgette has an idea. She arranges with Hempleworth so that at midnight, all the church bells in the area ring the time. Tradition is set with the Arthurs – Christmas is a holy day, and they will take a day off from battle.

Galahad returns with the Grail. Will he be healed?

FROM HORRIFIC TO MOVING

The art of Once and Future #27 is varied and expressive. Galahad, for example, may be monstrous and undead, yet he still strives for success and acceptance. When he fails to get the Grail (again), he returns, defeated and exhausted, angry at Elaine and despairing of Lancelot who are in an uneasy alliance to him succeed. When he tries yet again, we see his stubbornness and his desperate hope that he is whom he has always believed he was. When Lancelot realizes that mostly what he wants is to have a father and gives him that, we see a startling change in him which makes him look so human despite his monstrous appearance.

I like the scenes with the three Arthurs. They look entirely different from one another, but there are small features of their costumes, like spikes from the head, that they share. Even when they are apart, their stances are so similar that they do feel like three versions of the same person. The fight with the three of them is captured in fragmented panels where we get a sense of the chaos and just how unrelenting they all are. They are beyond being people; they are each story-driven to reach their own conclusion.

I do like seeing how Once and Future #27 is drawing things together. So many of the characters have motivations beyond those of the traditional stories and seeing all those conflicts headed for collision is truly exciting.

As the end of the year draws close, the battle for which Arthur will reign begins!