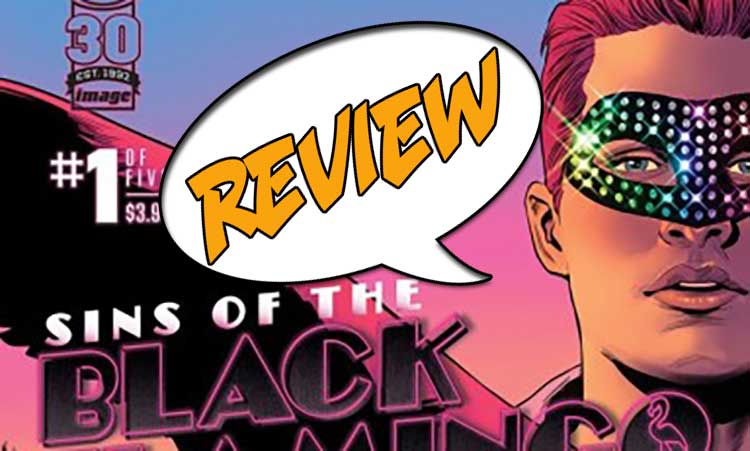 Sebastian Harlow is a self-described gentleman thief who specializes in occult artifacts. But when a job leads him to another, potentially more dangerous, item, what else will he discover? Find out in Sins of the Black Flamingo #1 from Image Comics!

SINS OF THE BLACK FLAMINGO #1

Previously in Sins of the Black Flamingo: Where the wealth and corruption of Miami cross over into the occult underground, the pickings are good for the Black Flamingo. This flamboyant thief loves nothing better than to mess up their plans by stealing their mystic artifacts. But this latest score comes with something unexpected…

ANOTHER DAY, ANOTHER MYSTERIOUS ARTIFACT

The scene shifts to the Museum of American Heritage and Culture, described as being mostly a collection of Confederate memorabilia, by way of some accompanying snarky commentary. The Flamingo disguises himself as a sailor and stands in a display of mannequins until the museum shuts down for the night. Then the Black Flamingo steps out and reveals himself for the flamboyant gentleman thief that he is. As he describes his work, he steals magic artifacts from idiots and puts them where they belong. And looks good doing it, as he slips on a sequinned mask.

His target is in the basement, a basement that has no cameras, and which is home to their Nazi collection. The Flamingo reminds us that when the camps were liberated, the survivors with pink triangles were still considered criminals. This is where he finds the object he has come to collect, an inscribed clay tablet that belonged to a Jewish, queer intellectual. He also sees a document and sketch that catches his eye. He pockets both and leaves behind his calling card – a small black flamingo token.

He returns to the Steinems, now at the Palm Beach Jewish Community Center, where we see the statue of a man, a mystic, the man Mr. Steinem’s grandfather loved. He had claimed he would forge a table for the man’s soul and build a body to house it. It is basically a golem. The Black Flamingo inserts the tablet into the statue’s mouth, and he comes to life.

Harlow returns to his friend Ofelia and shows her the document he found. She says it is the description of a collar that might hold a demon or spirit. It is the property of Thorndike Scar, who is having a party that night. Harlow now wants to locate it before the Nazis do. They go to Scar’s mansion, with more snarky commentary. Scar talks to them and thinks he recognizes Harlow’s name as the owner of an artifact called the Devil’s Tooth. Harlow denies it, but we saw that he has that artifact.

Harlow sees a vision of people at the party turned into monsters. He asks Ofelia to cause a distraction while he runs off to find the collar. He is doing this on the fly, with no preparation and no contingency planning. Little does he know what he will find.

BOLD, DARING, AND TOO STYLISH FOR WORDS

The art of Sins of the Black Flamingo #1 is terrific, and there is so much to enjoy about it. A couple pages in, there is a scene-setting montage that looks like it was culled from a collection of “Florida man” headlines. Once we know we are in the weird and wonderful version of Florida, it is a small step to get into the occult. Tying this in with Nazis is a strong move, and provides an opening for some commentary on the current day.

Harlow is brash and good-looking. When he first puts on his thief outfit, it is a black leather bomber jacket with a fur collar, black gloves, and a black sequinned mask. It’s dramatic and a little over-the-top, but I like that there is an excuse for the sparkles – the reflectors prevent the cameras from picking up his face. And, in the best tradition of gentleman thieves, he does not hide when he goes to Scar’s mansion. He identifies himself as an antiquities dealer who works with private clients. He has some delightful chutzpah.

Sins of the Black Flamingo #1 is entertaining and sets up a wild heist scenario sure to have some great complications. Harlow has a lot of attitude which makes this a lively read, and I am already looking forward to more.

Sins of the Black Flamningo

Be gay, do crimes. And mess around with some Nazis along the way.