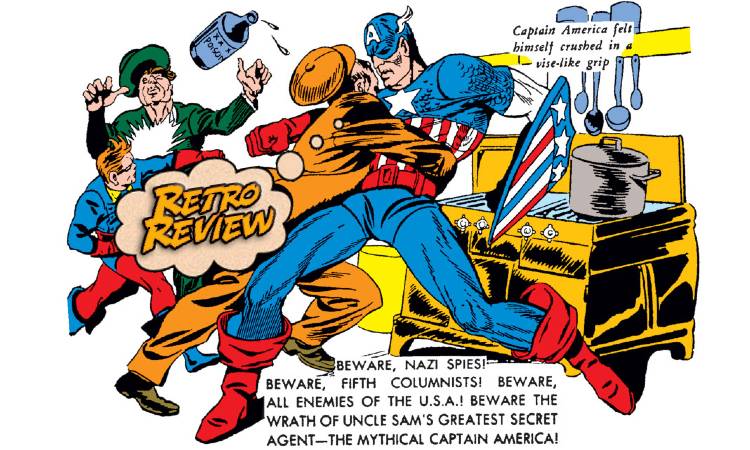 Previously in Captain America Comics: It all began with The Shield. MLJ Comics’ second superhero creation was the first of the red-white-and-blue patriotic costumed heroes that would soon be flooding comics, hitting the newsstands in November of 1939. Joe Simon may or may not have known about him when he sketched out his initial costume designs for “Super-American” in 1940, but it’s clear that Cap’s initial bullet-deflecting shield looks remarkably like The Shield’s bulletproof costume. Even though the United States was not yet involved in WWII, Simon and his partner Jack Kirby intentionally made the character’s motivations political as artistic opposition to the action of Nazi Germany, including the iconic front cover Hitler-punch. The story begins with acts of sabotage by fifth columnists that make President Roosevelt take extraordinary measures. FBI Agent J. Arthur Grover (hmmm) takes the assembled interested parties to a Dr. Reinstein (HMMM) who reveals that the mysterious formula that they’ve been protecting isn’t an explosive or a new kind of armor, but a serum to make super-soldiers! Many artists of the Golden Age of Comics were very primitive in their work, but Simon and Kirby’s layouts and figure work are absolutely amazing. That fifth-panel reveal of the newly bulked-up Steve Rogers is hugely impressive, worthy of having Hayley Atwell touch him in awe, as she would do some 70 years later on film. Before Reinstein can truly appreciate the wonder of his creation, spies in the operating theater open fire, killing him to keep the serum from being used against the fascists to whom they are loyal. It’s too late for Reinstein, but at least Steve is able to prove his skills by taking them all down with a little all-American swift-and-blinding-violence. He is then billeted at Camp Lehigh, spending his days as hapless Private Rogers and his nights punching all manner of evil in costume. Then, camp mascot Bucky Barnes changed his own fate by forgetting to knock. What’s most impressive is that all these events take place in space of eight pages, getting our hero’s origin over with and setting him out on the proverbial road quickly, efficiently, and effectively. A second eight-pager features our heroic duo fighting a pair of erstwhile psychics, followed by a two-page text story, something that modern comics are sorely missing. A third story features the titular Chessboard of Death, then we hit the story that I’m most fascinated by: The introduction of The Red Skull! Steve and Bucky’s commanding officer is assassinated by a shadowy figure known as The Red Skull, a man whose legend is spoken in hushed tones by a very few people in the know. The day after the murder, Private Rogers and Bucky witness a test flight by the Maxon Aircraft Corporation, a test that ends in a crash and the loss of the whole crew. Our heroes are infuriated that Maxon seems more interested in his bottom line than the deaths of brave airmen, but can’t really do anything about it. When another high-ranking military official is targeted, Cap and Bucky leap into action to find and stop the Red Skull. The defeat of the Red Skull reveals Maxon himself is under the mask! It might be puzzling for readers who know the perfidy of Johann Schmidt, the true Roter Schädel, but this issue doesn’t dwell on it, instead moving on to a pair of backup features. (One of them debuts The Hurricane, a character who has since been retconned as being Kirby’s later creation, the Eternal known as Makkari under an alias.) Though The Red Skull DOES first appear here, Schmidt doesn’t appear until Captain America Comics #7, where we find that Maxon was, in truth, working for him and by extension, for Hitler. So, the first appearance of the Skull is actually not the character designated as the first Skull, which kind of makes my head hurt. (Don’t even get me started on unraveling the 1950s Communist Red Skull.)

Captain America Comics #1 is sixty-eight pages of comics, one of the first Marvel books to focus on a single character and it holds up quite well both visually and narratively, with exciting art from front to back and stories that pack a LOT of detail into limited pages, earning 4 out of 5 stars overall. You’re not gonna find this one in a random back issue bin, unless you’re really lucky, but it’s well worth looking out for any of the Golden Age work of Simon and Kirby, as they as much as any creators made the comic book medium what it is today.

Behind an iconic cover we find three well-constructed, well-drawn tales that accidentally became the foundation of Marvel Comics, and later the MCU. I love it, but even if you don't, you have to respect the masters of the craft.