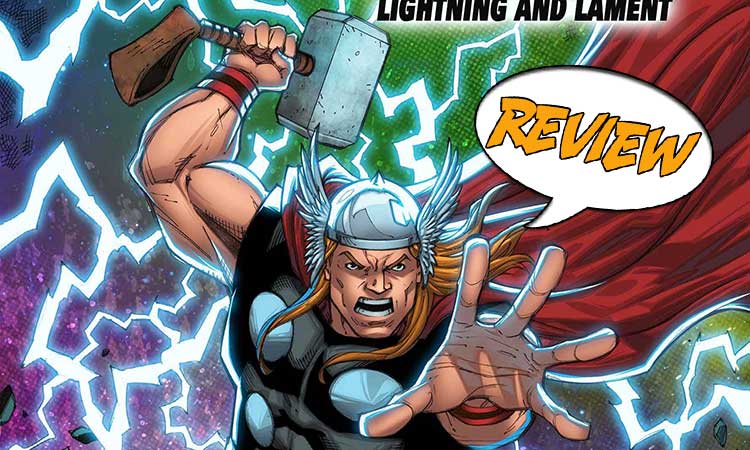 With Asgard and all his loved ones in peril, it’ll take all the powers of Thor and a surprising other to save the day.  Your Major Spoilers review of Thor: Lightning and Lament #1, awaits!

Previously in Thor: Lightning and Lament: When he feared his son had become too arrogant, the god Odin banished his son’s essence to Earth, where he became a surgeon Donald Blake.

ALL IN A DAY’S WORK

Thor: Lightning and Lament #1 opens up with Thor in the midst of battle with The Absorbing Man.  After trading a few blows, the God of Thunder gets the upper hand and is able to defeat the villain.  Afterward, Thor reverts to the form of Donald Blake, who then performs a successful surgery on a child.  Later on, he reminisces about how he found himself in the status he’s in.  The next thing he knows, Heimdall has appeared to inform him that trolls have invaded Asgard and they are in need of him.  In Asgard, things are looking bad for its defenders until Thor arrives.  In the frenzy of battle though, Sif, Thor’s lover, is badly injured.  Knowing that he cannot help Sif in his current state, Thor decides his other version is the one in need.

ON THE WRONG SIDE OF OUTDATED VS. HOMAGE

Thor: Lightning and Lament #1 is the type of comic that just isn’t made anymore.  The dialog is very descriptive, with the characters essentially narrating everything they’re doing.  The heroes are uncomplicated and extremely competent, almost to the point where there’s no tension.  And the villains lack any real motivation other than that they want to hurt the good guys.  The problem is that the reason comics like this aren’t made anymore, might be a good one.  While it was fun to read something that feels retro feeling for a few pages, by the end of this issue the dialog just became grating and too over-the-top, nearing amateur Shakespeare in the park levels of cheesy.  Thor: Lightning and Lament #1 somewhat makes up for this with its plot.  The way that it presents both Thor and Donald as being necessary and heroic in their own ways is enjoyable and manages to add the only bit of depth that this issue has to offer.

Sticking with the retro feel, the art in Thor: Lightning and Lament #1 is expressive and clear.  The characters are all very distinctive visually via bold facial features and the bold and classic costumes. It’s also very easy to tell what’s going on, even in the middle of big action sequences, which makes the overly descriptive dialog even more irritating in retrospect.

Thor: Lightning and Lament #1 comes with an uncomplicated but enjoyable plot that is a nice throwback to the early days of Thor.  But, the retro feel becomes too much of a good thing as the dialog becomes cumbersome and annoying.  3 out of 5 stars

Thor: Lightning and Lament #1 goes too far in its attempt to feel retro, making a decent story with good art, hard to get through with its overbearing dialog.