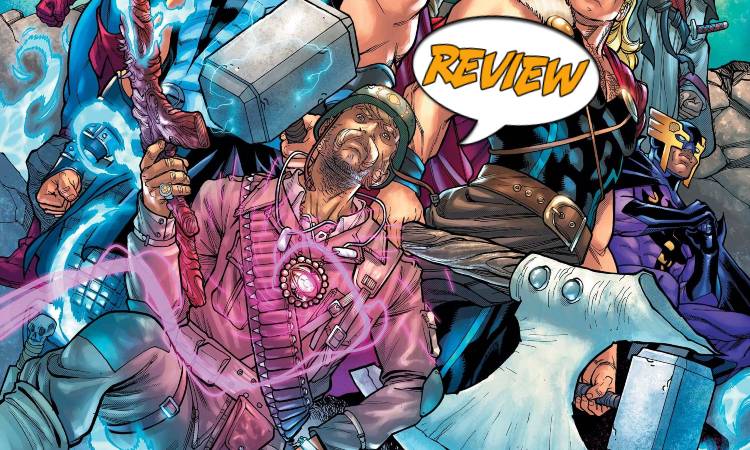 What is the lost history of The Soldier Supreme? Your Major Spoilers review of Avengers #57 from Marvel Comics awaits!

Previously in Avengers: The Avengers are lost in time, and if they’re going to stop Mephisto’s grand plan, they’ll need help from some of history’s greatest heroes, whose stories have never been told. Like the mystical man of war, Sgt. Szardos, Soldier Supreme of World War II, and his squadron of supernatural grunts, the Secret Invaders.

FIGHTING THE DEVIL THROUGH TIME

Last issue ended with Jane Foster worrying about whether or not she overcame the temptation of Mephisto, but we open this one in the middle of the ocean in 1943, as Sergeant Szardos faces the greatest threat of his tenure as Sorcerer Supreme. Forged from the bones of an ancient Leviathan and metal bearing the most heinous curses, U-666 prowls without a crew, sinking Allied ships with the power of pure evil. Fortunately, Szardos has his Breathing Gun, allowing him to perform an exorcism of the high-caliber variety. He awakens on an island with other American soldiers, only to have them attack him, one by one, each possessed by his mysterious foe. For weeks, he defends himself, eventually killing every one of the dozens of soldiers and sailors against his own better judgment. His mentor, The Ancient One, reminds him that the only way to kill a demon of this magnitude is to know its true name. That’s when a little bird tells him what he needs to know.

A little bird made of pure flame.

WHY IS BLADE HERE?

The presence of flame birds is the first indication of the Avengers presence, but Szardos finds himself assisted by Starbrand-powered mortars, an angel on a winged horse, and a “mysterious” thunderstorm, as Thor, Phoenix, and Valkyrie try not to betray their presence. When the Sarge finds a functional plane on the island (courtesy of Captain Marvel), it’s clear what the end-game is, and I’m actually quite entertained with the way the story plays out. It is a bit confusing where things pick up, as the last two issues haven’t really explained how and why the team has begun traveling through time, Garron’s art makes up for a lot of that confusion for me, including a truly impressive double-page spread of the hell-sub in action. I’ve heard a lot of complaints about the way Aaron’s stories unfold, but I have to say I’ve been enjoying this book, and have seen from previous arcs that things tend to work out by the end.

If nothing else, the Secret Invaders are a fun concept, meaning that even if Avengers #57 doesn’t work for you, it’s packed full of new twists on the Marvel Universe and really good-looking art, even if I can’t quite work out the timeline that allows Blade to be active in 1943, earning 4 out of 5 stars overall. Given that we’ve seen a little bit of the lost history that the team is trying to protect/recreate, I’m looking forward to the rest of this arc.

Besides, it’s not every day you see a Ghost Rider in a WWII army tank.

It's the first stop on a journey through time and the team of Aaron and Garron and company make a very entertaining issue.