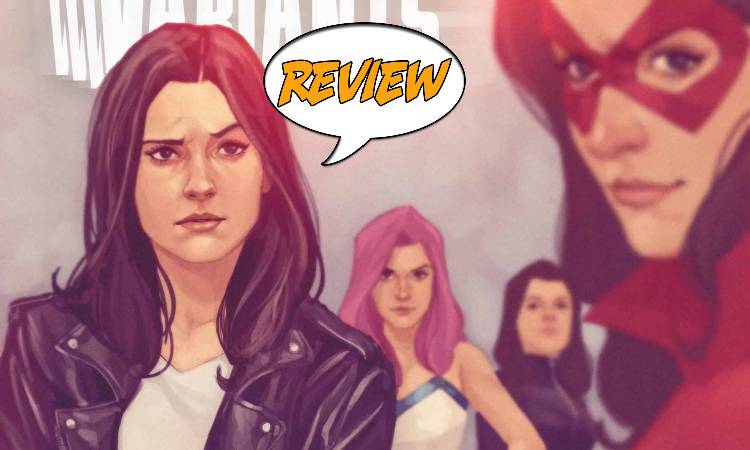 What would it be like to meet yourself? Jessica Jones is about to find out. Your Major Spoilers review of The Variants #1 from Marvel Comics awaits!

Previously in The Variants: What would it really be like to meet an alternate version of yourself, another you who had made different choices and lived a completely different life as a result? That’s the question facing Jessica Jones, as what seemed like a routine investigation instead has her encountering other incarnations of herself from across the Multiverse. Can Jessica get along with herself? Will she want to kill her other selves? And will seeing the lives she could have led drive her into a self-destructive spiral?

Having given up coffee, Jessica Jones finds herself aimlessly wandering the streets, always ending up near her favorite coffee shop. In order to distract herself, she thinks back to the days before her wedding to Luke Cage, going lipstick shopping, and telling the salesperson that she’s getting married. After a long period of indecision, she picked a shade, but as her reverie ends, Jessica blacks out. Fortunately, she has some unique friends, which means that Daredevil is there to catch her before she hits the pavement… but there’s a catch. He needs her help, testifying on behalf of his client, another victim of Zebediah Killgrave. Though she agrees to do it, she’s extra-mad when she finds out that the girl has a message for her: Killgrave left a failsafe command in her head that caused her to commit murder, and she thinks Jessica has one, too. It’s yet another reminder of the scars that the Purple Man left on her world, but things get even worse when she returns home to find an intruder in her daughter’s room! A scuffle ensues, but her opponent is her perfect match… because her opponent is Jessica Jones!

I was actually quite surprised by the last page reveal of the third Jessica Jones, especially since the solicitation copy (and the cover) seem to imply that all her Variants were known quantities. As someone who accidentally bought the first issue of Alias twenty years ago, I’m impressed with Simone’s take on the character, building on the existing history while adding a few new, human wrinkles to the portrayal of Ms. Jones-Cage. I’m pleasantly surprised how much I like Noto’s art in this volume, especially in the amount of detail in the backgrounds and facial expressions. The stylization of Noto’s style can come across as stiff, but that’s not a problem on these pages. The coloring is also well-handled, combining Jessica’s world of noir and black leather with the pastels that Noto normally favors. Given that one of the primary scenes in the issue takes place on a dark rooftop, it’s a very welcome choice.

BOTTOM LINE: MORE OF THIS, PLEASE

Perhaps my favorite part of The Variants #1 is the utilization of Killgrave that doesn’t feel like rehashing the iconic clashes of their past, showing us a side of Jewel/Knightress/Jessica that we haven’t seen in strong focus in previous stories, with remarkably nuanced art and color combining for 4.5 out of 5 stars overall. The next issue can’t come out quickly enough for me.

This issue takes one of my favorite Marvel characters and puts her in unfamiliar territory, but never loses sight of what makes Jessica Jones tick. Plus: The last page reveal is both shocking and hilarious.